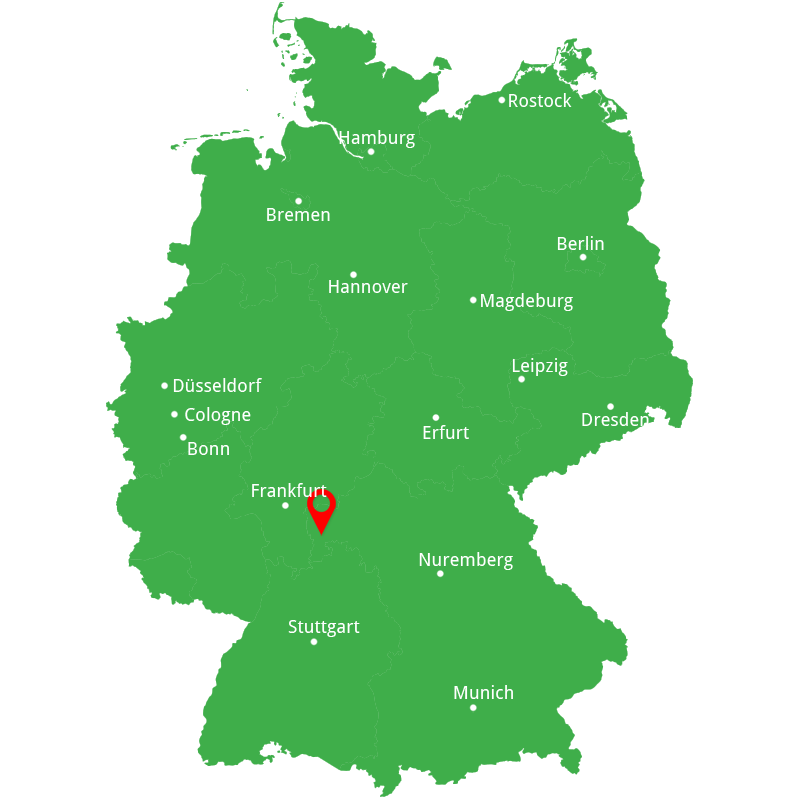 Johannisburg Palace, until 1803 the second residence of the Mainz electoral archbishops, is located in the centre of Aschaffenburg by the River Main. The massive four-winged complex, built from 1605 to 1614 by the Strasbourg architect Georg Ridinger in place of the medieval castle but incorporating the 14th-century keep, is one of the most important examples of German palace architecture from the Renaissance era. At the end of the 18th century, the interior was redesigned in the neoclassical style by Emanuel Joseph von Herigoyen.

After severe damage in the Second World War, the palace was restored, beginning with the exterior. In 1964, the Bavarian Palace Department was able to reopen its staterooms and collections: the palace church with its Renaissance altar, pulpit and portal sculptures by Hans Juncker (early 17th century), the Vestment Chamber with vestments from the former Mainz cathedral treasury and the Princely Apartments with the original neoclassical interiors and furniture. One particularly unusual attraction is the world’s largest collection of cork architectural models. These remarkably detailed reproductions of the most famous ruins in Rome were made from 1792 onwards by the court confectioner Carl May and his son Georg. The restored models have been on display since 1996 in specially redesigned rooms. With a total of 45 models, the Aschaffenburg collection is the largest of its kind in the world.

Also included in the tour of the staterooms are two further collections: the State Gallery with Old German and Dutch art, featuring paintings by Lucas Cranach the Elder and his workshop, and the Palace Museum belonging to the town of Aschaffenburg, with impressive works of art ranging from medieval sculptures and valuable furniture and ceramics to paintings by Christian Schad.

The tour of the palace is ideally complemented by a walk through the small but varied palace garden to the Pompeiianum. From the Main terrace, bordered by a balustrade, there is a panoramic view of the Main river valley. The path continues down to an attractive pergola, which runs above a section of the original medieval town wall.

This is followed by a small elevation, the site of the neoclassical Breakfast Temple designed in 1782 by von Herigoyen. Behind it is the last remaining section of the former town moat, which was redesigned as a landscape garden in the 1780s by Friedrich Ludwig Sckell on behalf of the Archbishop and Elector of Mainz, Friedrich Carl von Erthal.

Discover more
Did you know?
Unique City
Special Events
Discover seasonal events
Mainz Christmas Market
Mainz Christmas markets are tailor made for family holidays and romantic couples breaks at popular German Christmas markets.
Find out more
No items found.
Stay at Local
Maritim Hotels
Our preferred European hotel partner
No items found.
Subscribe to our Tours & Land Holidays offers
JOIN NOW
Thank you! Your submission has been received!
Oops! Something went wrong while submitting the form.
Book Your
Excursions
By clicking an excursion below, you will be taken to the website of our booking partner Viator. Viator is a TripAdvisor company and reservations made using this link will be made directly with Viator. Full terms and conditions apply.
Inspiration & Advice
Our Blogs
Find plenty of tips, advice and news stories in our weekly blog posts.
3 Bavarian Castles To Admire
Bavaria has some great examples that are available for the public to explore, giving you an insight into the role they played in Germany’s past.
READ MORE
How To Visit Neuschwanstein Castle
One of Germany's most popular attractions lies off the beaten path and away from the main cities. So, what's the best way to visit?
READ MORE