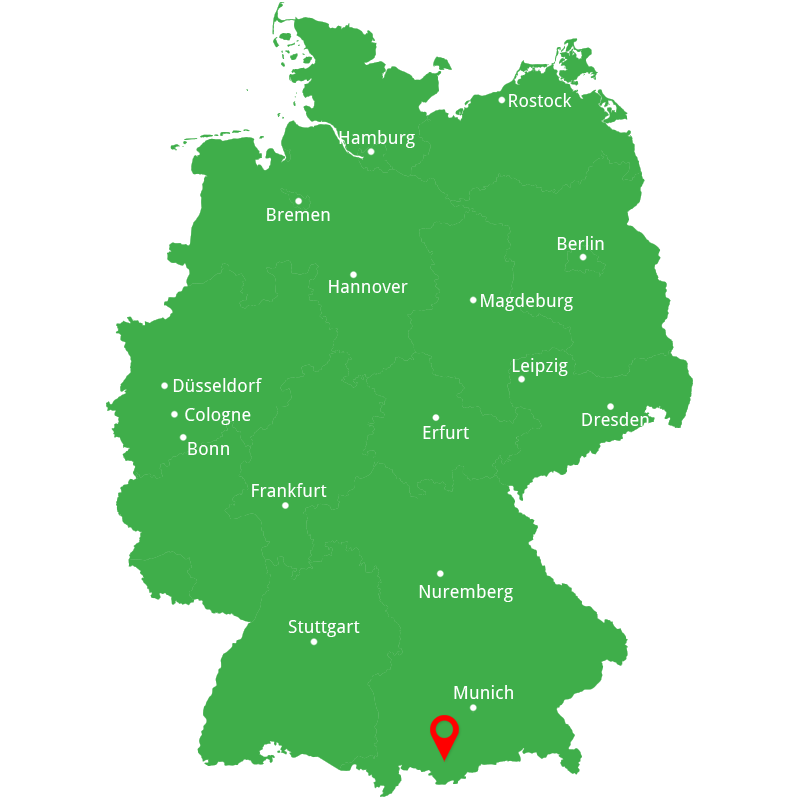 A beautiful traditional Alpine village situated in a valley surrounded by mountains, meadows and forests, Oberammergau is a quiet and peaceful haven. Admire the painted houses, so typical for this region. Wherever you wander in the village there is something worth exploring, whether it's the woodcarvers' workshop, the many secluded corners with religious carvings and paintings, or one of the local restaurants offering the finest regional cuisine.

Oberammergau is surrounded by a network of well-signposted hiking paths; you can hire bicycles and cycle to nearby lakes or visit the 'WellenBerg', the local leisure swimming pool complex with indoor and 3 outdoor pools and a fantastic view over the valley. Oberammergau, situated near to the Alpine Road is an ideal place to base yourself on a motoring or car hire holiday.

You can find more accommodation options on our hotels in Bavaria page. However, if you are looking to explore a different part of Germany, we can also offer Wiesbaden city breaks and hotels in Baden-Baden.

Oberammergau is a tourist haven, and it's no wonder why. There are so many wonderful places to visit in the charming village and nearby area. Castles, houses with painted facades, the Passion Play Theatre, the Oberammergau Museum and the incredible views of the Alps are the main reasons for travelling to this Alpine paradise.

The play tells the story of Jesus Christ from his entrance into Jerusalem to his sacrifice on the cross. About half of the town's population participate and the cast rehearses for ten months before staging the final production in a partially outdoor arena. The play, which lasts five hours with a three-hour intermission for dinner, is the centre focus for the village the year before it is performed. The village fills with visitors during the Passion Play's run, and rooms are at a premium. People travel from all over the world to attend it. Book your place here.

Oberammergau is also well-known for its many buildings with their wonderful tromp l'oeil images that are painted onto the facades. Tromp l'oeil means 'fooling the eye,' and that's exactly what these scenes do. They look unusually real to the observer; most of the images are on official and religious buildings, but some hotels have painted scenes as well. Often religious in nature, a beer garden scene can be spotted here and there too.  The finest example is the Pilatus House, which in a strange way gives the viewer the illusion of what appears to be architecture on the façade of the house.

Situated right in the village, the Oberammergau Museum has fine exhibits of Bavarian art and other historical items. Because religion was so important in the daily lives of the Bavarians, most of the objects are religious in nature, including the fine woodcarvings that extend from the Gothic period to modern day. Besides these, there is a large collection of nativity cribs and glass that's painted locally using a special technique called 'verre églomisé' or reverse glass painting.

The Living Workstudio and the Sculpture Route

Verre églomisé pictures are painted on glass as seen in a mirror. Visitors who have become curious about this technique in the Pilatus House can visit the Living Workstudio next door to watch painters practising this technique. In the Living Workstudio, carvers joined forces with wax modellers and verre églomisé artists 30 years ago to form a craftsmen's family which paints and carves - and answers the visitors' questions.

A visit to Oberammergau would not be complete without a day trip to Linderhof Palace. With the Alps as a backdrop, the building, which was originally just a cottage, transforms the visitor back to a time when King Ludwig II, who was known to be quite eccentric, received guests and entertained. The castle is reachable by car or by a public bus from Oberammergau.

You can enjoy carefully prepared local cuisine at the original pine tables in this 350-year-old inn. There's a special children's menu and. in summer. meals are served in the beer garden. The front terrace of this delightful old building is a great place to watch the world go by, whilst part of the café has been reserved for those wishing to use the internet.

Just across from the Pilatus House, in the centre of Oberammergau, you find this family-run restaurant. The menu contains typical Bavarian dishes as well as lovely vegetarian choices. S'Wirtshaus, which actually means 'Tavern' in English, opens daily and offers hot food all day long.

This is the spot to go when you want to discover a really traditional place to eat. In the middle of the 16th century, the Stern was already an inn, selling beer and meals for transients on the old trading route. Enjoy a savoury cheese snack or a typical Bavarian Sausage salad (made of strips of sausage, onions, gherkins and oil and vinegar dressing) in the beer garden.

Discover more
Did you know?
Unique City
Special Events
Discover seasonal events
No items found.
No items found.
Stay at Local
Maritim Hotels
Our preferred European hotel partner
No items found.
Subscribe to our Tours & Land Holidays offers
JOIN NOW
Thank you! Your submission has been received!
Oops! Something went wrong while submitting the form.
Book Your
Excursions
By clicking an excursion below, you will be taken to the website of our booking partner Viator. Viator is a TripAdvisor company and reservations made using this link will be made directly with Viator. Full terms and conditions apply.
Inspiration & Advice
Our Blogs
Find plenty of tips, advice and news stories in our weekly blog posts.
10 Things You Didnt Know About The Oberammergau Passion Play
If you didn’t know already, 2020 marks the 42nd Passion Play in the German town of Oberammergau. A lot of work goes into staging this iconic spectacle, so here are ten things you didn’t know.
READ MORE
The Ease Of Travelling To And In Germany
Although we like to pretend we don’t, Britons secretly love Germany & its holiday destinations. Here’s how simple it is to get to and around.
READ MORE