0800 035 0711
0800 988 3369
Home
/
Destinations
/
Europe
/
Poland
Travel to...
Poland
In recent years, Poland has become an increasingly popular tourist destination with tourists discovering the gems that once were hidden behind the iron curtain.
See Departures

In recent years, Poland has become an increasingly popular tourist destination with more and more tourists discovering the gems that have hidden behind the iron curtain of its communist past.

Krakow has been likened to Prague as a beautiful medieval city, which emerged from WWII unscathed, enchanting visitors with magnificent architecture and charming old streets lined with pretty houses and churches.

Visitors are often surprised to learn that Poland is a country full of striking natural scenery. The country possesses the last remaining primeval forest in Europe, Bialowieza, a beautiful area of wooded countryside home to the rare European bison. More stunning to many are the enormous sand dunes of Slowinski National Park on the Baltic Coast, some of them reaching over 45m in height. And in the South, the Tatra Mountains provide numerous opportunities for skiing and hiking.

Let Fred.\ tailor-make a Krakow city break or speak to our team of specialists about how best to go about exploring Warsaw. Either way, Fred.\ can ensure you get the most out of your Polish holiday. 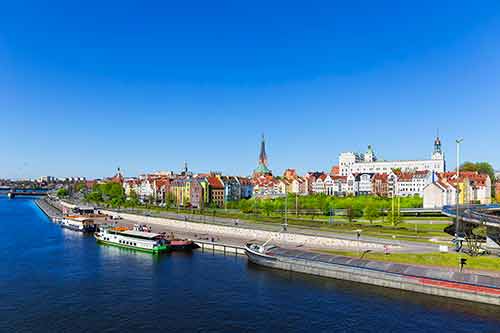 The Polish people tend to be friendly, laid back and welcoming to visitors.

Poland is a Catholic country, and particularly in the countryside, people are fairly conservative and generally quite devout. If visiting churches, make sure you are appropriately dressed and covered up to avoid causing offence. In the cities, attitudes tend to be more liberal.

The home is of great importance in Poland and this is where the Polish come into their own. If you are lucky enough to be invited to someone's house, you'll be treated like royalty. Warm hospitality is renowned and hosts will do everything they possibly can to make their guests comfortable.

Polish food is very comforting - perfect to warm you up on a cold winter's day. Poles take great pride in their domestic pork. Along with potatoes and cabbage, it makes up the core of the Polish diet. Bread is also a staple; especially rye bread, commonly served with many meals.

Because many Poles are devout Catholics, fish is also widely eaten, especially on Fridays and during Lent. Salmon, cod, trout and carp are the most popular choices and are available year-round. Preserved herring, in a variety of styles, is common as an appetiser or snack.

Numerous dishes are likely to come up on the menu when eating in Poland, but the following are the most common specialities:

Pierogi: ubiquitous on Polish menus, these flour dumplings are the ultimate comfort food. Savoury fillings include meat, cabbage and mushrooms, or ground potato and cheese. Pierogi filled with fruit or sweet cheese is often served for dessert.

Kielbasa: kielbasa is the generic word for sausage in Polish. On a restaurant menu, kielbasa usually refers to the reddish smoked variety, grilled and served with mustard. White (biala) kielbasa resembles bratwurst.

Bigos: is a hearty meat and vegetable stew; there are several variations on the theme including pork, lamb or venison with apples, sauerkraut or mushrooms.

Poland is most famous for vodka found throughout the country in a variety of infusions and flavours. The older generation favour clear vodkas drunk neat, while the younger generations tend to mix vodka with soft drinks. Top-quality vodkas include Krakus and Wyborowa while the most popular brand is Polonez.

Beer remains popular too, and certain Polish brands can rival the best German and Czech brews. Zywiec is the most ubiquitous lager beer - although the best beers are likely to be found regionally, the product of independent or microbreweries.

With a vulnerable location, sandwiched between superpowers on either side, Poland's history is one of unrest and invasion. Despite this, though, Poland has retained a unique cultural heritage and proved itself as a proud and indomitable nation.

The country's first historically documented ruler was Mieszko I (c. 935-992), Duke of Polans (a territory roughly equivalent to modern Poland).

The last independent King of Poland abdicated in 1795. The core of the country became the Grand Duchy of Warsaw under the protection of Napoleon I. Between 1815 and 1918, Poland ceased to exist as a political entity and was divided between Russia, Prussia (then Germany), and the Austro-Hungarian Empire.

In 1939, Poland had the largest Jewish community in Europe (almost 3.5 million). This may be why 70% of the Nazi extermination camps during WWII were located in what is now Poland, including the three most infamous ones: Auschwitz-Birkenau, Treblinka and Belzec.

Subscribe to our Tours & Land Holidays offers
JOIN NOW
Thank you! Your submission has been received!
Oops! Something went wrong while submitting the form.
Discover more
Did you know?
Famous Poles include The classical composer Frédéric Chopin (1810-1849), born in Poland to a Polish mother and a French-expatriate father (hence his French name). - Marie Curie (born Maria Sklodowska; 1867-1934), the first and only Nobel laureate in two different sciences and first female professor at the Sorbonne University.
Read Some
Related Blogs
Find plenty of tips, advice and news stories in our weekly blog posts.
8 Creepy Characters From European Folklore
With Halloween on the horizon, we have gathered some of the best creepy creatures from myths, legends and folklore around Europe.
READ MORE
Europe’s 2020 Anniversaries And Milestones
There’s plenty of historical anniversaries coming up in 2020 around Europe, making it a year to remember. Each milestone has a destination attached to it, so you may feel inspired to visit and experience some of the events and historical monuments first-hand.
READ MORE
3 Alternatives To A…Berlin City Break
Europe is home to some of the most popular cities in the world, with people travelling from all over to see iconic structures, interesting attractions and unique features. If you wish to escape the crowds but still get the same experience, consider some of the alternatives.
READ MORE
5 Lesser-Known Destinations In Our 2020 Brochure
Our 2020 brochure is out now and you may notice there are a few locations you haven’t heard of. In this blog post, you’ll discover what to expect in these beautiful, lesser-known areas.
READ MORE
How To Commemorate The Liberation Of Auschwitz 75 Years On
It was 75 years ago this year that the Auschwitz concentration camp in Oświęcim was liberated by the Soviet army. This is an important part of history that many people all over the world wish to commemorate.
READ MORE