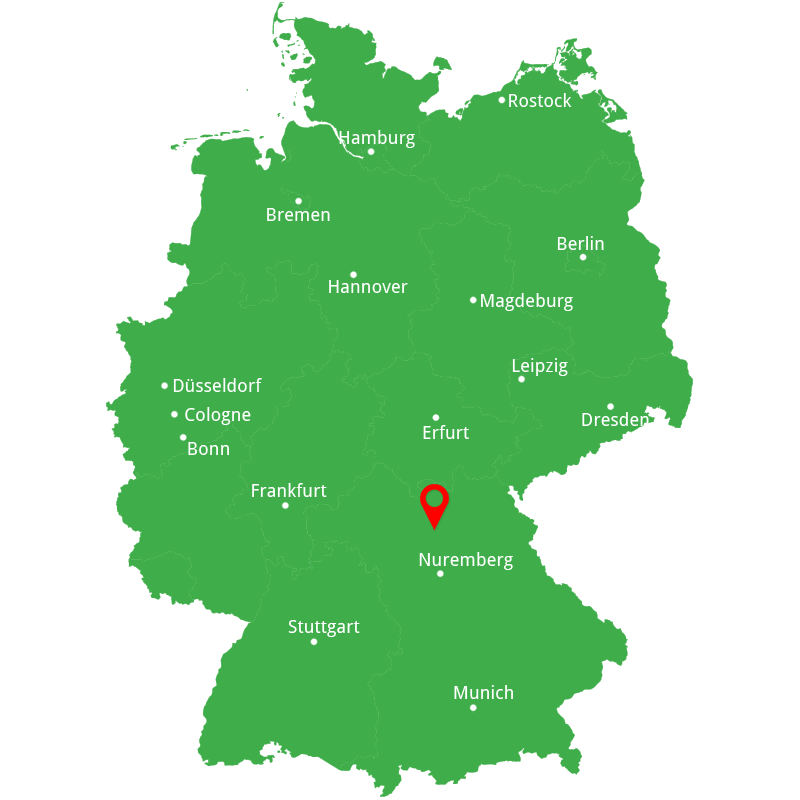 Nestled in the middle of Franconia, Erlangen is a typical German city with plenty of natural beauty and historic charm. A destination for all seasons, there is plenty to do throughout the year, including the country's oldest beer festival in the spring and a magical Christmas market in winter.

After Margrave Christian Ernst built a new town to house thousands of French Huguenot refugees in the 17th century, Erlangen existed as two separate towns for more than 120 years. However, in 1812, the old and new towns were merged to create the city as we know it today. It is still very easy to see the difference between the two areas though. The Medieval old quarter, with its cobbled streets, can easily be differentiated from the newer Baroque quarter and its sweeping squares.

Thanks to its brilliant location within Bavaria, Erlangen can serve as a great base for visiting some of the fantastic towns and cities in the surrounding area. Nuremberg and Bamberg are less than half an hour away and Regensburg can be reached in just over an hour.

This palace garden was partly influenced by the gardens of Versailles and partly by a typical English Garden. It features a prominent fountain that depicts Huguenot refugees and Christian Ernst. There is also a botanical garden which is home to many varieties of plants from tropical and subtropical regions. One particular garden is dedicated to aromatic plants that are used for cooking and medicine.

This was one of the key buildings that Ernst built his new town around. It was the first Huguenot Church outside of France and visitors can climb the tower for excellent views.

This new museum showcases the technological developments in medicine over the last 200 years.

This brewhouse is situated on the festival grounds of the Bergkirchweih beer festival. It is the perfect place to try some of the local beers and you can also tour the cellars.

This cafe has a big emphasis on sustainably sourced, organic ingredients and prides itself on its homemade products. There's also a large outdoor terrace where you can sit and watch the world go by.

With a friendly beer garden out the front and a cosy atmosphere inside, this is another great place to try some regional specialities. The rustic, wooden furniture adds to the homely feeling and some of the food is cooked in a wood-fired oven in full view of diners.

Discover more
Did you know?
Unique City
Special Events
Discover seasonal events
No items found.
Erlangen Beer Festival
Under the splendid old chestnut trees the 'Erlanger Bergkirchweih' (the dedication of the mountain church) has been celebrated annually for more than 250 years.
Find out more
Stay at Local
Maritim Hotels
Our preferred European hotel partner
No items found.
Subscribe to our Tours & Land Holidays offers
JOIN NOW
Thank you! Your submission has been received!
Oops! Something went wrong while submitting the form.
Book Your
Excursions
By clicking an excursion below, you will be taken to the website of our booking partner Viator. Viator is a TripAdvisor company and reservations made using this link will be made directly with Viator. Full terms and conditions apply.
Inspiration & Advice
Our Blogs
Find plenty of tips, advice and news stories in our weekly blog posts.
7 Things For Foodies To Do In Germany
From Bavaria to Brandenburg, Germany is home to some exciting, enticing and often quirky culinary attractions. Here are just a few to look out for.
READ MORE
The Ease Of Travelling To And In Germany
Although we like to pretend we don’t, Britons secretly love Germany & its holiday destinations. Here’s how simple it is to get to and around.
READ MORE
The Definitive Guide To A Nuremberg City Break
Here is everything you need to know when heading to the Bavarian city of Nuremberg. Our guide includes where to stay, where to eat, and the best things to do.
READ MORE