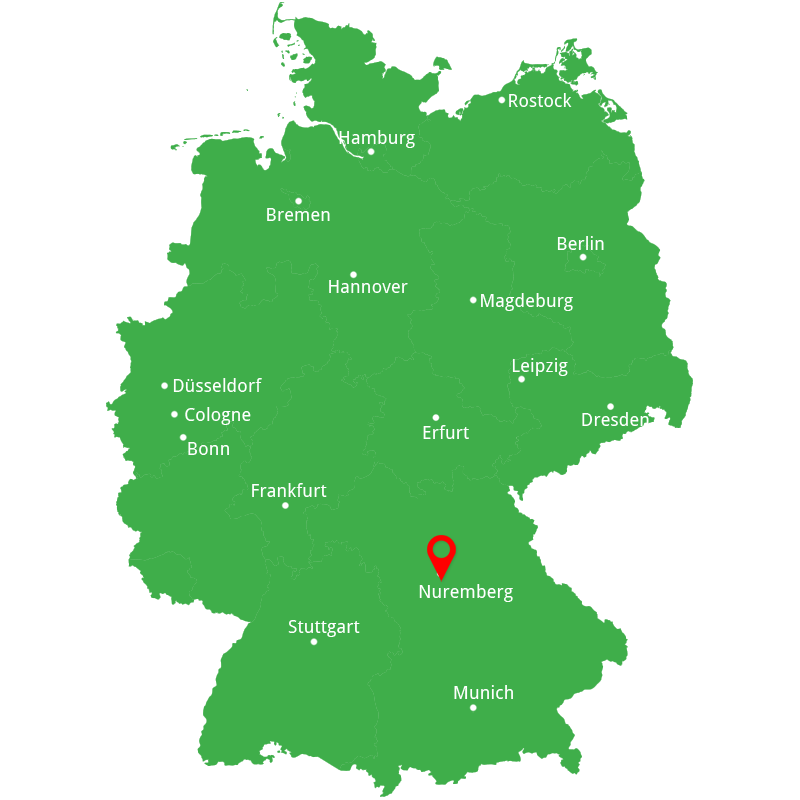 The city's medieval old town is enclosed by an ancient city wall and overlooked by the towering Kaiserburg Castle. One of the most fortified imperial palaces of the Holy Roman Empire, a large part of its thousand-year history can be seen and experienced. Gothic churches, splendid patrician's houses, historic sights and some of Germany's most important museums are situated throughout the town. Nuremberg boasts a unique atmosphere created by a blend of medieval and modern elements with the Documentation Centre (Dokuzentrum), the Court Rooms and the rally grounds providing a reminder of a darker age. Don't forget to try the local gingerbread and the traditional sausages.

For a more in-depth look at the city, check out our definitive guide to a Nuremberg city break.

The Kaiserburg Castle is considered as one of the most vital castles in the history of the German Empire.

One of the most famous museums and exhibitions in Nuremberg.

The largest museum of German art and culture in the world.

Don't miss the beautiful Church Frauenkirche and the Gothic fountain Schoener Brunnen. The fountain is one of the most visited sights in the city.

Visit one of Europe's biggest Zoos.

Take a journey through time via the medium of childhood toys. The exhibits range from dolls used in Medieval times to the sources of entertainment children love today.

Having opened in 1882, the Transport Museum in Nuremberg is the oldest in the world. It is operated by Deutsche Bahn, Germany's national rail provider, and therefore focusses mostly on the railways. The exhibits feature rail transport from the days of the steam engine all the ay up to the present day - they even consider rail technology of the future.

The Craftsmen Courtyard (Handwerkerhof) is like a town within a city. Set within traditional half-timbered houses, local merchants open their workshops up to passersby as they carry out their trade. Glass blowers, gingerbread bakers, goldsmiths and more offer a unique glimpse into their day to day lives.

The incomplete Nazi Part Rally Grounds serve as a constant reminder of a bleak point in Nuremberg's history and a monument to what could have been. Today the giant building that was due to be used as a congress hall houses a documentation centre dedicated to telling the story of the Nazi Party. It is situated outside of the city centre but is easy to get to and definitely worth a visit.

You will have to travel to the nearby town of Zirndorf to enjoy this amusement park, but it is a great day out for anyone travelling with kids. Similar to Legoland, it offers experiences and attractions based around the children's toy PLAYMOBIL.

One of the Nuremberg's favourite restaurants. It is full of tasty Mexican dishes and, during happy hour, cocktails are served at half price.

This Indian restaurant serves a range of tasty curries.

This restaurant offers a mix of comfort and good Chinese cuisine.

This traditional brewhouse is a quirky place in which to try some of the local specialities. It features rooms which proudly display brewing equipment, a steam engine (for brewing beer, not a train) and there's even a room with a life-size crocodile hanging from the ceiling.

This cafe is a popular spot for desserts and cakes. They have a great selection of fruit tarts in the summer.

The story goes that Nuremberg sausages are long and thin so that they could be passed between the bars to prisoners. Their small stature doesn't diminish the taste, though. Try three in a roll with some traditional mustard.

These gingerbread treats are available all over the Christmas market stalls but you should be able to find them in shops and bakeries at other times of the year too.

This is a typical Franconian dish made from pork shoulder served with potato dumplings. The name translates to mean 'shovel' because of the shape of the bone.

As well as being famous for its beer, Nuremberg has a history of distilling great whisky. You'll see many shops and bars where you can try a drop or buy some to take home with you.

Nuremberg has one of the oldest pedestrian precincts in Germany which is also one of Europe's largest shopping areas. Enjoy a day out in the shopping centre, which is not far away from the Church of St. Lawrence, or discover the many small shops in the beautiful narrow lanes around the main market square and below the castle.

Kaiserstrasse is slightly more high-end, as it is home to a number of exclusive shops, boutiques and cafes.

The Hauptmarkt and streets leading to the castle offer a large number of souvenir shops and small speciality shops.

Zwinger Bar: The Zwinger Bar is a bar with an interesting interior design. It is always crowded and Tapas is offered.‍

Bar Celona: Bar Celona is a low-priced Euro bar offering a large range of drinks. It is also possible to sit outside.‍

Club Stereo: Club Stereo is perfect for those who enjoy reggae, funk and soul. This club is located in a dark cellar and is particularly popular with students.‍

Sound Express: This night club is the place for dancing in the city of Nuremberg, especially on Saturday nights. Although it is a bit out of the city centre, it is easy to travel to by cab.

After you've visited the Kaiserberg Castle, head below the surface to discover one of the secrets to Nuremberg's beer. There is a maze of cellars running below the ground which brewers have used to store their beer for hundreds of years. Take the tour and then enjoy a beer tasting afterwards.

This peaceful and well-hidden public park is the perfect place to escape the busy city. You can reach it by walking through the castle gardens and down a set of narrow steps. It almost has an enchanted feel to it and provides great views towards Albrecht Dürer House.

This peaceful spot is where Albrecht Dürer, Veit Stoss and other famous figures from Nuremberg are buried.

Zum Guldenen Stern is the oldest sausage restaurant in the world. Here, you can enjoy the traditional Nuremberg bratwurst made from locally sourced meat and served six at a time.

Unique City
Special Events
Discover seasonal events
Nuremberg Christmas Market
Nuremberg Christmas markets are popular holidays for families and couples on traditional breaks to the German Christmas markets.
Find out more
No items found.
Stay at Local
Maritim Hotels
Our preferred European hotel partner
Nuremberg
Subscribe to our Tours & Land Holidays offers
JOIN NOW
Thank you! Your submission has been received!
Oops! Something went wrong while submitting the form.
Book Your
Excursions
By clicking an excursion below, you will be taken to the website of our booking partner Viator. Viator is a TripAdvisor company and reservations made using this link will be made directly with Viator. Full terms and conditions apply.
Inspiration & Advice
Our Blogs
Find plenty of tips, advice and news stories in our weekly blog posts.
10 Things To Know About Nuremberg Bratwurst
Great as a snack as you walk around the Christmas market or as part of a main meal, here are ten things you should know about these meaty delights.
READ MORE
The Definitive Guide To A Nuremberg City Break
Here is everything you need to know when heading to the Bavarian city of Nuremberg. Our guide includes where to stay, where to eat, and the best things to do.
READ MORE
These European Statues Bring Good Fortune To All Who Touch Them
All over Europe, there are statues with parts of their bodies that have been polished clean by tourists in a bid to glean some fortune in their favour. Here are some great examples that you should look out for on your travels.
READ MORE