0800 035 0711
0800 988 3369
Home
/
Destinations
/
Germany
/
Freiburg
Travel to...
Freiburg
Freiburg city breaks offer a unique experience, especially for lovers of nature. This lively university city is located at the Southern end of the Black Forest. 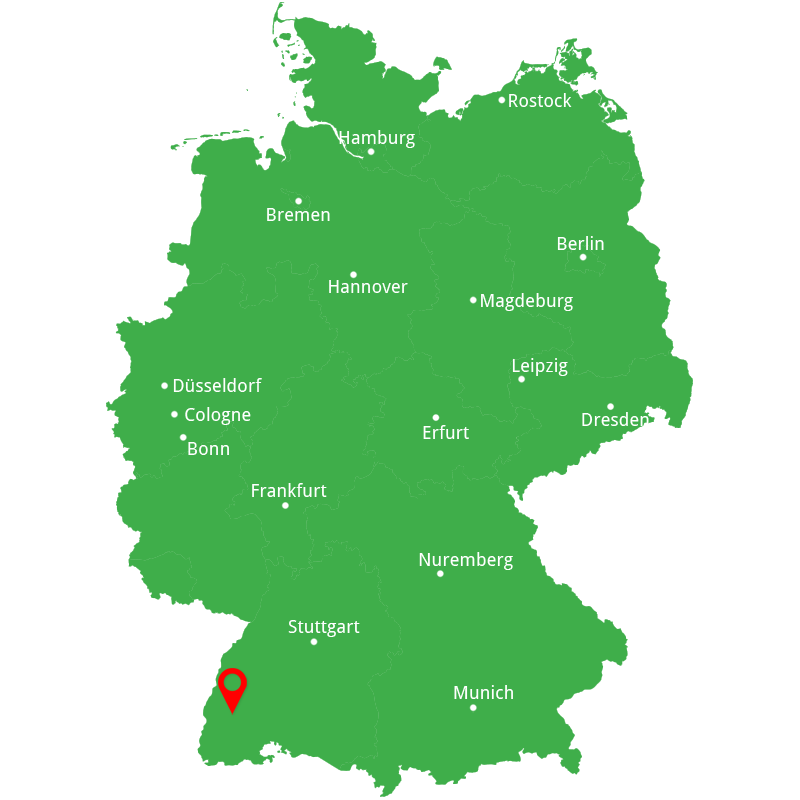 Freiburg city breaks offer a unique experience to those looking to get back in touch with nature. Freiburg is a lively university city, located at the southern end of the Black Forest, close to the Swiss and French borders. As Germany's Green City, it could possibly be one of the most eco-friendly places in the world. However, visitors may be forgiven for not noticing the car-free streets and eco-housing amongst the buzz of market traders and locals looking to grab a deal.

Freiburg's townscape is dominated by its magnificent Münster on the bustling market square, which is transformed into a festive display for the annual Freiburg Christmas Market. As you stroll through the town, be sure to look down at the pavement for the cheerful mosaics often found in front of the shops.

The little rivers (Bächle) running parallel to many footpaths, as well as the dynamic cultural scene and an excellent range of restaurants and bars, further add to the charm of this beautiful city.

Located in the centre of the Black Forest at the southwestern tip of Germany, Freiburg is a quintessential German city that, over the years, has attracted many visitors without losing its cultural roots. A Freiburg city break is the perfect choice for those looking to take a stroll along the various nature walks, up the rocky pathways towards the picturesque peaks and through the romantic Wutach gorge. Our Strasbourg city breaks also offer the opportunity to venture into the surrounding national parks and are popular with visitors who enjoy exploring Germany's spectacular scenic sights.

Freiburg hosts the longest cable car run in Germany, which is 3.6km, or about 2.25 miles (3.62 km) long runs from Günterstal up to a nearby mountain called Schauinsland.

The Augustinerplatz is one of the central squares in the old city. It used to be an Augustine monastery and then became the Augustinermuseum in 1921. Now it is a popular social space for Freiburg's younger residents, where there are numerous restaurants and bars, including the local brewery 'Feierling', which has a beer garden. On warm summer nights, hundreds of students gather here.

At the centre of the old city is the largest square in Freiburg, the Münsterplatz. This is the site where Freiburg's Münster, a gothic structure built between 1200 and 1530, stands. It's imposing spire towers over the city of Freiburg.

On the south side is the Historisches Kaufhaus or Historical Merchants Hall. It was constructed between 1520 and 1530 and was once the centre of the financial life of the region. Its beautiful façade, decorated with statues and the coat of arms of four Habsburg emperors, makes it well worth a visit.

There are many restaurants in Freiburg which offer a great dining experience. The majority of the food served is based on seasonal specialities made with fresh ingredients from the Black Forest region. Freiburg also hosts two annual wine festivals.

For traditional cuisine, try the popular Oberkirchs Weinstuben which has a rustic feel created by the historic wood beams which decorate the interior.

Heiliggeiststüble is a cheaper alternative which is run by friendly staff. The restaurant-café offers good food at reasonable prices. At the Gasthaus zum Kranz and the Hotel-Restaurant Löwen in the Altstadt, traditional German food is again available at more reasonable prices.

Dining at the Dattler offers an impressive view. Located at the top on the Schlossberg, this restaurant is well established in the community, being over 125 years old.

The Münsterplatz is filled with food vendors which sell the Freiburg speciality of a Bratwurst with cooked onions. For those with more of a sweet tooth, there are also vendors which sell crepes or waffles, and fresh fruit can be bought from a stall in the Münstermarkt.

The historical town centre of Freiburg is the heart of this city. The area is traffic-free and has many department stores, specialist shops, fashion boutiques, bookstores, art and antique stores, and a variety of other shops.

The market is a vital part of life in Freiburg. A market is held every weekday on Münsterplatz, the square around the minster, which sells fresh flowers, meats, cheeses, fruits, vegetables and there are also the famous sausage vendors. Baden wine, Black Forest Kirsch schnapps and Black Forest ham are also sold at the market. On the Rotteckring, the market and the stalls sell North African and Indian goods.

Freiburg, like the rest of Germany, is host to many beer gardens. Cafes and bars are also common.

StuSie Bar is the chosen hot-spot for students. Glamour is also popular because of its themed nights and at weekends two floors are open for dancing.

For a more elegant evening in Freiburg, try the Cocktail Bar Hemingway in the Hotel Victoria or Grace a café-bar-restaurant.

Waldsee on Waldsee Street is perfect for those who are looking for nightclubs with more music and dancing. During the afternoon, this place offers a cheap lunch menu and serves coffee.

KoKi Kommunal Kino shows an impressive collection of old and modern cinema classics and, although it is rather run-down, a pleasant evening can be spent walking in the gardens and watching a film.

Discover more
Did you know?
Unique City
Special Events
Discover seasonal events
Freiburg Christmas Market
Freiburg Christmas markets are popular family holidays with traditional festive breaks available at the German Christmas markets.
Find out more
No items found.
Stay at Local
Maritim Hotels
Our preferred European hotel partner
No items found.
Subscribe to our Tours & Land Holidays offers
JOIN NOW
Thank you! Your submission has been received!
Oops! Something went wrong while submitting the form.
Book Your
Excursions
By clicking an excursion below, you will be taken to the website of our booking partner Viator. Viator is a TripAdvisor company and reservations made using this link will be made directly with Viator. Full terms and conditions apply.
Inspiration & Advice
Our Blogs
Find plenty of tips, advice and news stories in our weekly blog posts.
5 Places To Stay When Visiting The Black Forest
When visiting the Black Forest, you may find it easier to stay in a larger town or city and then travel to the smaller places from there. Here are a few great options.
READ MORE