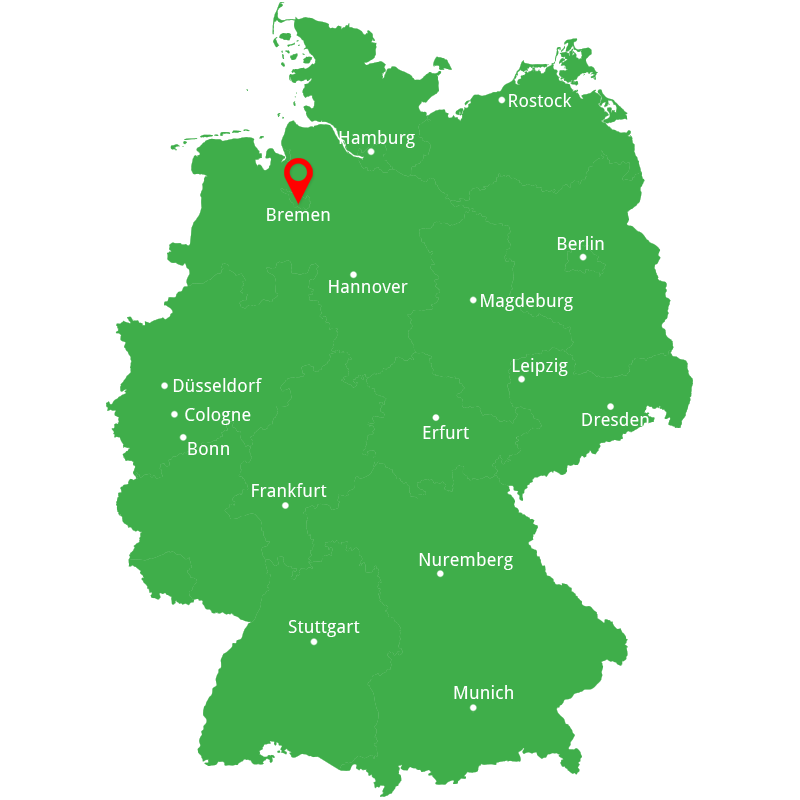 Bremen city breaks take in this modern city where historic heritage and cosmopolitan culture combine to create a colourful array of attractions. All the sights, from the UNESCO World Heritage-listed waterfront at Schlachte Promenade and quaint Schnoor Quarter to the elegant Town Hall, are extremely popular visitor attractions.

There's always something to do in Bremen where arts are all around, particularly along the 'cultural mile' in the heart of the city. From concerts to art exhibitions, there is always a huge range of entertainment on offer. The Bremen Christmas Market is a favourite with tourists and locals, with many stands and displays that exhibit the finest festive treats the city has to offer.

A Bremen city break is not complete without a trip to The Bremen Arena. The venue has a capacity of 14,000 visitors and is popular with those from the surrounding area and on Hamburg City Breaks. The arena is the epicentre of entertainment for the city, offering internationally recognised concerts, sporting events, shows and special events. There is always something on to cater to your tastes.

Hidden between the Dom and the river, you will find Bremen's oldest district, which is a maze of lanes hosting little 15th and 16th-century houses.

Don't miss the impressing gothic brick building with its splendid Renaissance façade and Roland statue, which have been added to the UNESCO World Heritage list.

The Science Centre near the Bremen University presents science as a thrilling adventure. Visitors can explore more than 250 exhibits as well as a discovery zone (EntdeckerPark).

Learn some interesting facts about Bremen's well-known beer brands Becks and Haake Beck in the museum, raw material store and brewing room, before trying some samples of the delicious beer. (Reservation necessary).

Bremen is home to the largest Mercedes factory in the world and car fanatics are invited to take a look around. From classic models to the very vehicles that will soon be driven today, you'll see the history and production behind this much-loved manufacturer. Close by, you can get hands-on with a Mercedes GLK on the exhilarating test course known as 'the Rock'.

This old shipping facility has been transformed into a living museum that will show you the history of the docks and German classic cars. Stroll in and out of the shops and restaurants along the boulevard, as you watch people cleaning and restoring vintage vehicles in the various workshops.

From regional cuisine to international delicacies, Bremen is a real paradise of gourmet food. Visitors will find a wide range of restaurants in the historic city centre as well as at the Schlachte waterfront.

A centrally located cosy restaurant in the Gewerbehaus in the city centre, close to the Schlachte Embankment offering traditional cuisine.

Traditional local and national specialities served in a historic wine cellar in the historic city centre.

This restaurant is located at the Schlachte waterfront and blends traditional cuisine with modern elements. Guests will be served hearty maritime and exotic specialities from the famous German currywurst to lobster.

Bremen offers its guests fantastic shopping facilities. There are plenty of boutiques, fashion shops and department stores in the city centre, which are all within a short walking distance from each other. Some fantastic malls are easy to reach from the city centre.

Shopping and leisure complex on the banks of the Weser.

Less than 500 metres from the market square and the statue of Bremen's Town Musicians, the waterfront offers a variety of bars and restaurants.

Party time across five zones offers something for everyone. Within walking distance of the main station.

This location offers live music from rock, pop and blues to soul and dance.

A stone in the Domshof square marks the spot where the last person to be beheaded in Bremen was executed. A local custom sees people spit on the stone in disdain for her criminal actions.

Unique City
Special Events
Discover seasonal events
Bremen Christmas Markets
Bremen Christmas markets are popular events for visitors on holidays and festive breaks at traditional German christmas markets.
Find out more
Bremen Beer Festival
'Ischa Freimarkt' (it is Freimarkt) is what the Bremen inhabitants say when what is known as their 'fifth season' starts in autumn. Book your trip, today!
Find out more
Stay at Local
Maritim Hotels
Our preferred European hotel partner
Bremen
Subscribe to our Tours & Land Holidays offers
JOIN NOW
Thank you! Your submission has been received!
Oops! Something went wrong while submitting the form.
Book Your
Excursions
By clicking an excursion below, you will be taken to the website of our booking partner Viator. Viator is a TripAdvisor company and reservations made using this link will be made directly with Viator. Full terms and conditions apply.
Inspiration & Advice
Our Blogs
Find plenty of tips, advice and news stories in our weekly blog posts.
6 Things To Eat At the Bremen Christmas Markets
Over three days in Bremen, we had lunch and dinner from the market stalls, trying to sample as much of the local delights on offer as possible. Here are just a few that you should definitely try on your own trip to the Bremen Christmas mark&hellip;
READ MORE
What To Look Out For At Bremen Freimarkt 2018
Having been first held in 1035, the Bremen Freimarkt is one of Germany’s oldest festivals and the largest in the north of the country. Here are a few things you can look forward to in 2018.
READ MORE
4 Great Restaurants In 4 Of Bremen’s Best Neighbourhoods
One of the best things to do in Bremen is to wander around the many different districts to see what you find. Here are some fantastic restaurants to try.
READ MORE
5 Fairytales and Legends To Find On The Streets Of Bremen
Lying at one end of Germany’s popular Fairytale Route, it is no surprise that the streets of Bremen are home to a fair few myths and legends.
READ MORE