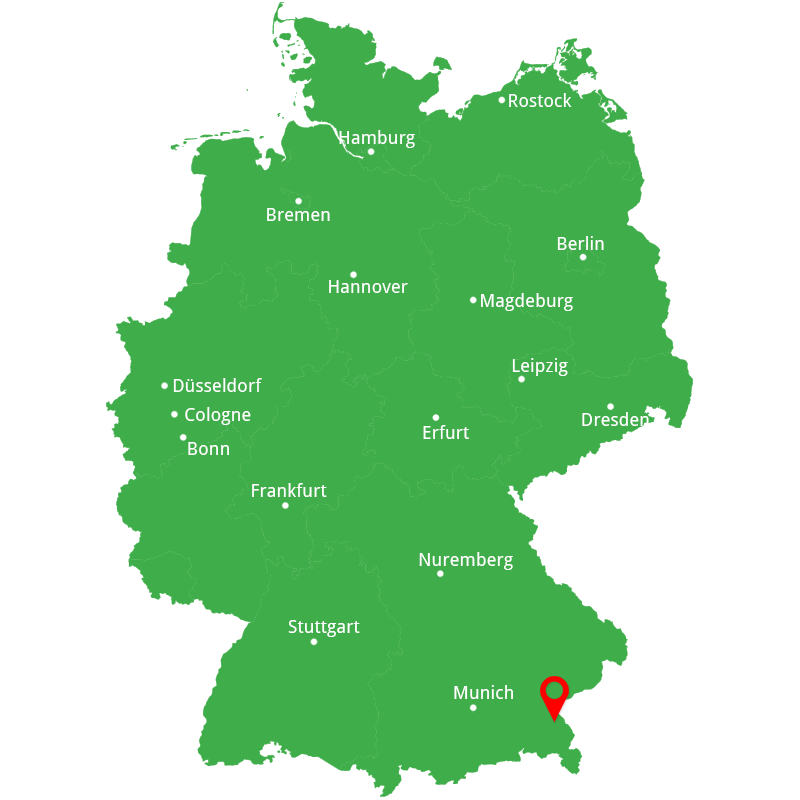 This picturesque town in the south-east of Bavaria has been the spiritual centre of the state for over 1250 years. Home to the best-known shrine in veneration of the Virgin Mary in Germany, the town is a popular pilgrimage destination. The region surrounding Altötting can be explored by foot or bicycle on one of the numerous pilgrimage routes such as St. James Way or the Benedict Trail, connecting the places where Pope Benedict XVI spent his youth. The town also hosts a beautiful and traditional Christmas market where a unique, homely atmosphere prevails in the town centre welcoming its visitors in quite a special way to the "nicest holy day of the year". You can also enjoy a lovely series of Christmas carol concerts which are performed with traditional Alpine folk instruments on Wednesday and Saturday throughout December in the beautifully decorated Basilica of St. Anne.

Architectural highlights in the town include the twin-towered Stiftskirche, a late Gothic church erected in the early years of the 16th century in order to cater for the growing affluence of pilgrims, and the huge Neo-baroque Basilica, built at the beginning of the 20th century.

Altötting is also ideally located for visits to nearby Oberammergau, famous for its Passion Play productions and traditional woodcarving, and can also be combined with trips to Munich, Passau, Salzburg and Lake Chiemsee.

There are also so many other parts of Germany to discover. Check out our Leipzig city breaks or hotels in Sylt, for example.

One of the hearts kept inside the Chapel of Grace belongs to the fairy tale King Ludwig II, the ruler responsible for the beautiful Neuschwanstein Castle.

Unique City
Special Events
Discover seasonal events
Altötting Christmas Market
Altöetting Christmas Markets are tailor made for visitors who enjoy holidays and short breaks to the German Christmas markets.
Find out more
No items found.
Stay at Local
Maritim Hotels
Our preferred European hotel partner
No items found.
Subscribe to our Tours & Land Holidays offers
JOIN NOW
Thank you! Your submission has been received!
Oops! Something went wrong while submitting the form.
Book Your
Excursions
By clicking an excursion below, you will be taken to the website of our booking partner Viator. Viator is a TripAdvisor company and reservations made using this link will be made directly with Viator. Full terms and conditions apply.
Inspiration & Advice
Our Blogs
Find plenty of tips, advice and news stories in our weekly blog posts.
Make A Pilgrimage To Altötting This Christmas
Whether you practice Christianity or not, a visit to the town of Altötting at Christmas will be very interesting and insightful.
READ MORE
5 Pilgrimage Sites In Europe
Whilst many pilgrimages are done with religious intentions, those interested in hiking, nature or simply the history relating to a specific town or city may also enjoy visiting some of the destinations on our list.
READ MORE