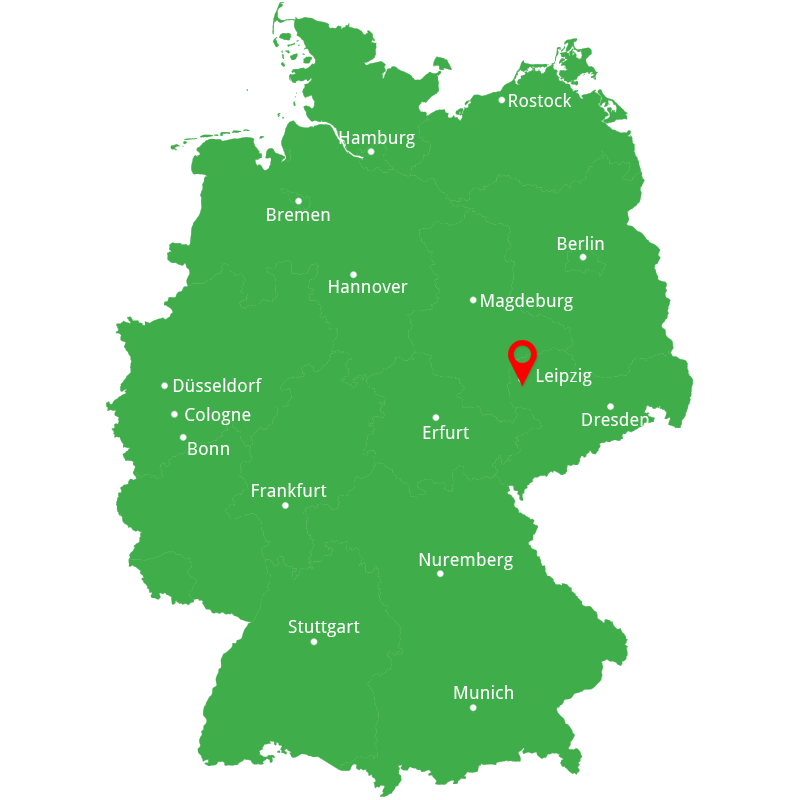 The city of Leipzig is located in the heart of Germany and is proud of its unique musical heritage. World famous artists such as Bach, Mendelssohn and Schumann composed their classical masterpieces here. Thousands of music lovers travel to the city every year in order to walk in the footsteps of famous composers. Yet Leipzig has even more to offer; a multifaceted cultural life, diverse museums and galleries, a high density of pubs and history lies at every turn.

Welcome to the city of Goethe's 'Faust' and Bach's 'St. Matthew Passion'. Besides the city's poetic and musical reputation, Leipzig combines Saxon tradition and high culture with high-tech business progression perfectly. The air of 'Leipzig Liberty' pervades the city at every turn.

Enjoy a stroll through the charming city centre with its enchanting historical buildings. The beautifully compact old centre is full of Renaissance and Baroque churches, street markets, one of Europe's oldest universities and a number of ultra-modern buildings.

This city, rich in tradition, can boast a long history of 1,000 years, during which time much has taken place. This includes the Peaceful Revolution in the autumn of 1989 - an important milestone on the way to the fall of the Berlin Wall and the German reunification. See where the Peaceful Revolution began, toppling the East German regime. Leipzig is a real treat for the senses - a place where music and culture truly thrive.

Established in 1693, this is the third-oldest opera in Europe.

Located next to St. Thomas Church, this was home to the Bach family and it is the largest Bach archive and museum in Germany.

The only remaining part of the ancient town fortifications of Leipzig.

One of the largest stations in the world. Today it is also a shopping centre with shops on three levels.

Europe's oldest concert hall. The Gewandhaus Orchestra and the Leipzig Gewandhaus have been cultivating classical music for over 250 years.

Every Friday evening and Saturday afternoon you can listen to the famous Boy's Choir at St.Thomas Church.

St. Nicholas Church contains Saxony's biggest church organ. Here, none other than Johann Sebastian Bach was inducted into his post as Leipzig's director of music. The church became famous due to the prayers for peace that took place here every Monday, which were the starting point for the Peaceful Revolution of 1989. The church is a symbol of the German Reunification.

Leipzig Zoo is within easy reach of the city centre and is one of the best zoos in Europe. Gondwanaland allows you to see 90 exotic animal species and around 500 different plant and animal species.

This Renaissance castle gained international fame as a prisoner-of-war camp during World War II for Allied officers who had repeatedly escaped from other camps. It sits in a river valley in an area of rolling hills and farmland, 24 miles south-east of Leipzig and is easily reached by public transport. The trains towards Colditz run daily, about every hour from the Leipzig Hauptbahnhof to Grimma or Grossbothen, where you can then take a bus to Colditz through various little towns.

Visit one of the best restaurants in Leipzig offering regional delicacies.

Leipzig is the perfect choice for a day's stroll through boutiques and shops. From A for Antiquarian bookstore to Z for Zoo shop, the city leaves nothing to be desired.

Find the most popular destination for shopping in the pedestrian-orientated city centre.

This Passage offers a selection of luxury shops and boutiques to enchant all shopping enthusiasts.

Welcome to one of the most beautiful shopping centres in Germany. In Europe's biggest terminus station, visitors will find 142 shops on 3 floors offering fashion, food, entertainment electronics and much more.

Leipzig attracts its visitors not only during the day but when night falls too. Several lively pub miles in the city centre invite visitors to an unforgettable nightlife experience.

Moritzbastei: If you are looking for nighttime entertainment, the Moritzbastei is the right place to be. This youth and student club is located in the former city bastions and offers a wide range of activities. From dance and concerts to exhibitions, this club has something for everyone.

Leipzig’s role in achieving peace during the re-unification of Germany led to it being given the nickname City of Heroes (Stadt der Helden).

Unique City
Special Events
Discover seasonal events
Leipzig Christmas Market
Leipzig Christmas markets are ideal for family holidays and romantic breaks to the German Christmas markets.
Find out more
No items found.
Stay at Local
Maritim Hotels
Our preferred European hotel partner
No items found.
Subscribe to our Tours & Land Holidays offers
JOIN NOW
Thank you! Your submission has been received!
Oops! Something went wrong while submitting the form.
Book Your
Excursions
By clicking an excursion below, you will be taken to the website of our booking partner Viator. Viator is a TripAdvisor company and reservations made using this link will be made directly with Viator. Full terms and conditions apply.
Inspiration & Advice
Our Blogs
Find plenty of tips, advice and news stories in our weekly blog posts.
The Ease Of Travelling To And In Germany
Although we like to pretend we don’t, Britons secretly love Germany & its holiday destinations. Here’s how simple it is to get to and around.
READ MORE
7 Things For Foodies To Do In Germany
From Bavaria to Brandenburg, Germany is home to some exciting, enticing and often quirky culinary attractions. Here are just a few to look out for.
READ MORE