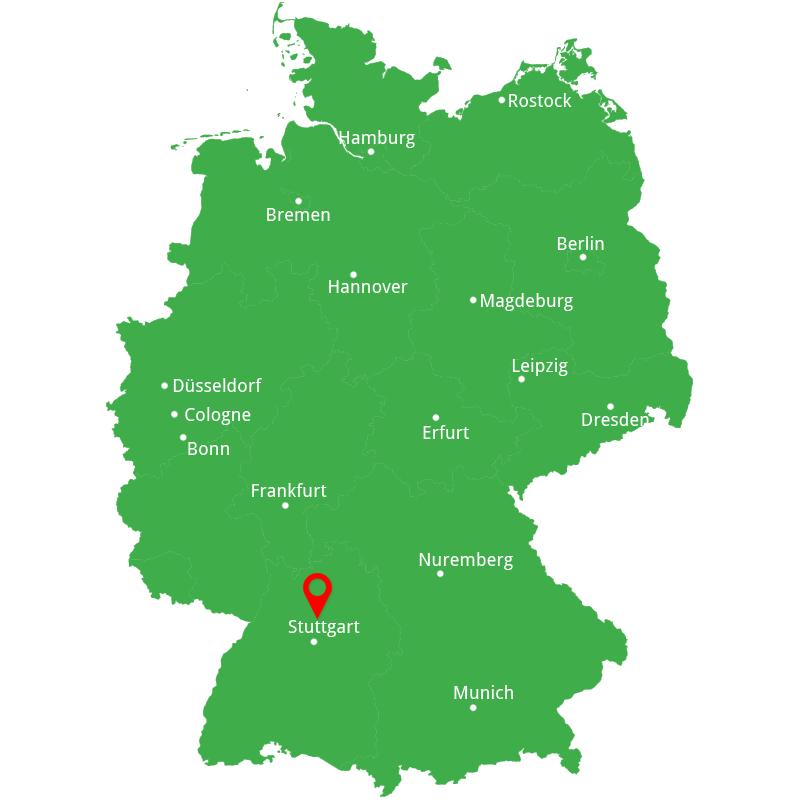 Duke Eberhard Ludwig is often quoted as saying "there are already more than enough boring towns" and t was this point of view that inspired him to build Ludwigsburg. The magnificent centrepoint is the Residential Palace, whilst next to it, and just as imposing, are the hunting lodge and summer residence. The large gardens surrounding the residential palace are home to the garden show Blooming Baroque and the Fairy Tale Garden. In the centre of the town you can see the baroque living quarters and the birth houses of famous poets, or sample the many local dishes.

The picturesque town is one of the few planned cities of the 18th century that still exist in Germany. Created on the drawing-board, the town was built according to the absolute will of Duke Eberhard Ludwig of Württemberg. Up to the 19th century, the dominance of the court not only characterised the architecture but also the culture of the town. Now free from the courtly constraints, the culture and the museums of the town are characterised by experimental art, multimedia shows and modern exhibitions.

We also have many other holidays in Germany available. For example, our Hamburg city breaks and hotels in Fussen provide an excellent chance to explore the country.

An impressive Baroque Palace with 452 rooms spread over 28 buildings. The beautiful gardens around the palace make the trip to Ludwigsburg unforgettable, however, they are not open all year round.

The Hunting Lodge and Summer Residence

Situated close to the Residential Palace and completed in 1723 by Duke Eberhard Ludwig for Wilhelmine von Graevenitz, his mistress at the time, the Hunting Lodge and Summer Residence has a Baroque facade and furniture from the Napoleonic era. There is a spectacularly large wildlife garden to explore and the paintings hung inside the palace will stir the sense. As well as being open to visitors, it is also the backdrop for a popular TV talk show entitled 'Nachtcafé'.

Discover more
Did you know?
Unique City
Special Events
Discover seasonal events
Ludwidsburg Christmas Market
Ludwigsburg Christmas Markets tailor made and fully inclusive travel packages to Europe including Germany.
Find out more
No items found.
Stay at Local
Maritim Hotels
Our preferred European hotel partner
No items found.
Subscribe to our Tours & Land Holidays offers
JOIN NOW
Thank you! Your submission has been received!
Oops! Something went wrong while submitting the form.
Book Your
Excursions
By clicking an excursion below, you will be taken to the website of our booking partner Viator. Viator is a TripAdvisor company and reservations made using this link will be made directly with Viator. Full terms and conditions apply.
Inspiration & Advice
Our Blogs
Find plenty of tips, advice and news stories in our weekly blog posts.
Ludwigsburg Pumpkin Festival – The Ultimate Autumn Activity
The Ludwigsburg Pumpkin Festival is held every year and includes a whole host of interesting events for fans of autumn.
READ MORE
The Baroque Beauty Of Ludwigsburg
Whilst many German towns and cities were founded during the Roman Empire, Ludwigsburg is much younger. The city was born in 1704 and boasts many stunning features from the resplendent Baroque period.
READ MORE