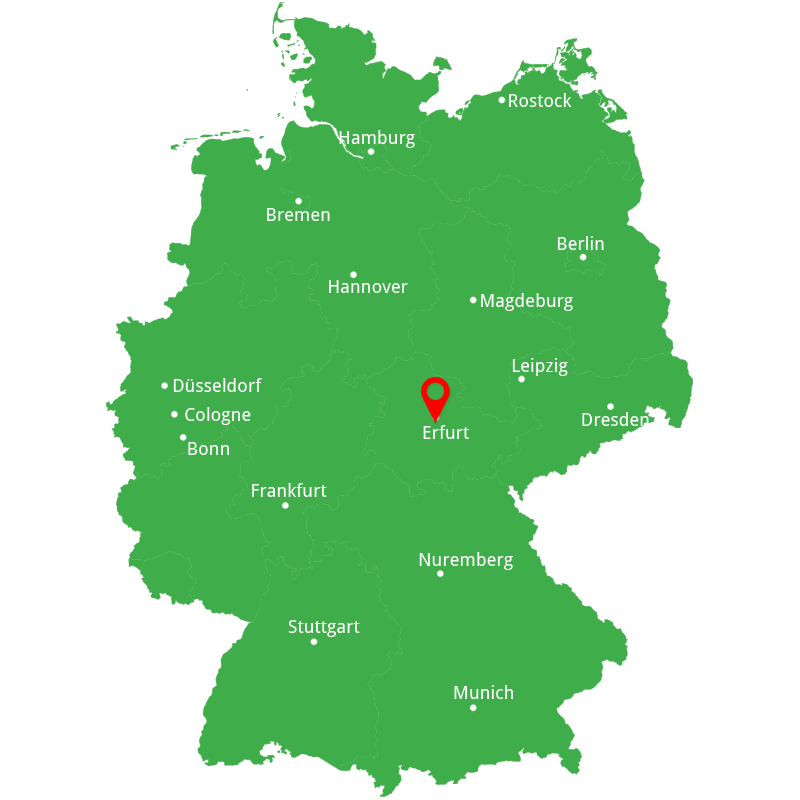 The state capital of Thuringia boasts over 1,270 years of history and is one of the best-preserved medieval city centres in Germany. Erfurt is typified by the attractive patrician townhouses and lovingly reconstructed half-timbered buildings and has played host to many important figures including Luther, Napoleon, Goethe and the Bach family. Its two churches, the Mariendom and St. Severus, stand side by side as emblems of the city and the famous Kramerbrucke bridge never fails to fascinate. Crossing the narrow Gera River, the bridge is 120 metres long and with 32 houses along its course, it is the longest inhabited bridge in Europe.

The historical attractions continue with Petersberg Citadel, the best-preserved Baroque city fortress in Central Europe. Visitors are free to tour the underground passageways to discover the tumultuous history of this struct built in the place of a former monastery.

Eight-hundred-year-old steps lead up to the heavenly cathedral towering over the Domplatz. Today, it is a Gothic extravaganza, though its 1154 foundation is Romanesque. Fifteen 14th-century stained glass windows portray Biblical stories and the lives of the saints. A life-size candelabra in the form of a saint is the oldest free-standing piece of bronze artwork in Germany and a Romanesque sculpture of an enthroned Mary dates back to the 12th century. Opposite the ornate altar and choir stalls is a gigantic baptismal font, connected to the ceiling to symbolise baptism's power to connect Earth to heaven. Out of sight hangs the 12-ton Gloriosa bell, the biggest in medieval Europe, which only rings on important church holidays. Pause for a moment by the gigantic mural of St. Christopher, the patron saint of travellers, who is said to protect them against untimely death.

The muted sandstone interior and Gothic exterior of this church are similar to the Mariendom, for which it served as a model with its unusual three towers. This smaller neighbour asserts itself with its enormous Baroque organ, flying golden angels, flames, and fake pastel marble. The sarcophagus near the entrance supposedly holds the bones of St. Severus, for whom the church is named.

Founded in the 1400s and built using funds brought about by sales of Thuringian blue dye, this bridge still serves a commercial function, lined on both sides with shops that completely block the Gera from view. It is one of Erfurt's most interesting architectural attractions and features the tower of the Ägidienkirche from which glimpses of Erfurt's red-roofed houses can be enjoyed. Wander beneath the bridge, accessible from the flanking Rathausbrüke, to take the architectural marvel. There you can also relax on the grass, or wade in the Gera.

Erfurt's wide pedestrian promenade, the Anger (meadow), is one of the most attractive shopping areas in eastern Germany and it buzzes with activity. Nineteenth-century Neoclassical and Jugendstil architecture line the street, interlaced with modern constructions. Across from the post office is House #6, where Russian Tsar Alexander I stayed when he came to Erfurt to meet with Napoleon in 1808. The Kaufmannskirche, once the site of business transactions, sits at the end of the Anger behind the post office. The Angermuseum, Anger 18, housed in a yellow mansion, displays a small collection of medieval religious art from around Erfurt as well as rotating exhibitions of local contemporary art.

The oldest, completely preserved synagogue in Europe dates back to the 11th century. Today, it houses a museum which shows what life was like for the first Jewish community in Erfurt, as well as information about how the building itself was built. You will also see an exhibition called Erfurt Treasure, which features gold and silver jewellery dating back to the 1300s.

Performances at the puppet theatre range from fairytales like Snow White to modern dramatic stories. they are all portrayed by intricate glove, rod or marionette puppets.

One of the city's best restaurants, Clara boasts a Michelin star to its name. Located inside the Imperial Hall, it's the perfect place for anyone looking for a gourmet meal.

Adding some Italian flair to Erfurt's restaurant scene, Pavarotti uses traditional ingredients and cooking methods to offer a taste of the Mediterranean. Inside one of the historic houses on the Fischmarkt, it's also a great place to sample some typically Tuscan wine.

For tasty, local food there are few better options than this. As one of the oldest restaurants in Erfurt, its menu features traditional dishes from Thuringia and elsewhere around Germany. In the summer, the terrace is usually filled with people enjoying some of the locally brewed beer.

The Thüringer sausage is long and thin with a spicy flavour. Have it in a bun with some mustard and you'll never look back.

The second most popular regional dish is Rostbrätel. Pork steak is marinated in a mixture of beer, garlic, onions and mustard for up to two days and then cooked over an open flame.

This local speciality is mostly served at Christmas time. It's a version of stollen and can be grabbed from one of the many markets.

You'll need to be in Erfurt on the 10th of November to taste one of these specialities, as they are only served on the eve of St Martin's Day. These sweet croissants are deliciously flaky and filled with marzipan.

The beauty of Erfurt's town centre lies in its lovingly restored houses from various architectural eras. The beautiful townhouses on Angerstrasse and around Anger square give this shopping paradise its elegant flair.

Shopping bliss in the shadows of townhouses

Buildings steeped in history, such as the Ursuline convent or the baroque packing and weighing house, are interspersed with trendy shops and department stores. Don't forget to look out for genuine blue-printed articles from Erfurt's blueprinting workshops. Woad, the plant from which the blue dye is obtained, brought riches and prestige to Erfurt in the Middle Ages. This blue became the fashionable colour in Thuringia and can also be seen in the traditional pottery.

This venue is part Irish pub and part German Biergarten. Trendy Erfurters show up for the cordial atmosphere, good food, and cheap beers.

Fans of spirits will love this relaxing place to sink a drink or two. With a large collection of gin and rum, there are plenty of tempting cocktails to sample. The dark wooden furniture is reminiscent of a typical smoking lounge.

Eat all three meals in unconventional seating and a terrace overlooking the river. Daily drink specials.

This bar features photos of Agatha Christie's humorous private eye on the walls and an entrance that is a dead ringer for a London phone booth. The kitchen serves great baguette sandwiches and Thüringer specialities.

On the ground floor, students devour cheap eats and finger food at the cafe/bar Steinhaus, whilst the basement disco hosts a two-floor DJ battle ("Fight Club") on Saturdays.

This city fortress is of the best examples of a Baroque citadel in the whole of Europe. You can enjoy fantastic views of the city from the ramparts or take a guided tour through the maze of tunnels that lie underneath.

This is another place from which you can enjoy panoramic views of Erfurt. This striking church stands at the entrance to the Krämerbrücke and was built during the Middle Ages. Visitors can climb up the Red Tower and make way along the wooden walkways.

If you are looking for somewhere to unwind during your time in Erfurt, the Egapark is perfect. The city's largest green space has plenty of places to relax, as well as themed gardens, a children's farm and a butterfly house. The park is also where you will find the German Horticultural Museum, taking you on a journey through gardening traditions from around the world.

Discover more
Did you know?
Unique City
Special Events
Discover seasonal events
Erfurt Christmas Market
Erfurt Christmas markets offer festive breaks and tailor made holidays to the German Christmas markets.
Find out more
No items found.
Stay at Local
Maritim Hotels
Our preferred European hotel partner
No items found.
Subscribe to our Tours & Land Holidays offers
JOIN NOW
Thank you! Your submission has been received!
Oops! Something went wrong while submitting the form.
Book Your
Excursions
By clicking an excursion below, you will be taken to the website of our booking partner Viator. Viator is a TripAdvisor company and reservations made using this link will be made directly with Viator. Full terms and conditions apply.
Inspiration & Advice
Our Blogs
Find plenty of tips, advice and news stories in our weekly blog posts.
The Ease Of Travelling To And In Germany
Although we like to pretend we don’t, Britons secretly love Germany & its holiday destinations. Here’s how simple it is to get to and around.
READ MORE
7 Things For Foodies To Do In Germany
From Bavaria to Brandenburg, Germany is home to some exciting, enticing and often quirky culinary attractions. Here are just a few to look out for.
READ MORE
The Best-Preserved Medieval Destinations In Germany
Germany is one of the best places in Europe to see well-preserved medieval towns and cities. Ruins are one thing, but when you get the chance to experience things almost as they were hundreds of years ago, it adds an extra layer to your trip
READ MORE
4 Important Figures Who Have Influenced Life In Thuringia
Thuringia can boast a number of big names that have passed through its towns and cities over the years and left a big impression. Here are four such figures.
READ MORE