0800 035 0711
0800 988 3369
Home
/
Destinations
/
Germany
/
Bayreuth
Travel to...
Bayreuth
Best known for hosting the annual Bayreuth festival, this German town is dominated by its musical history offering both a Wagner and a Liszt museum. 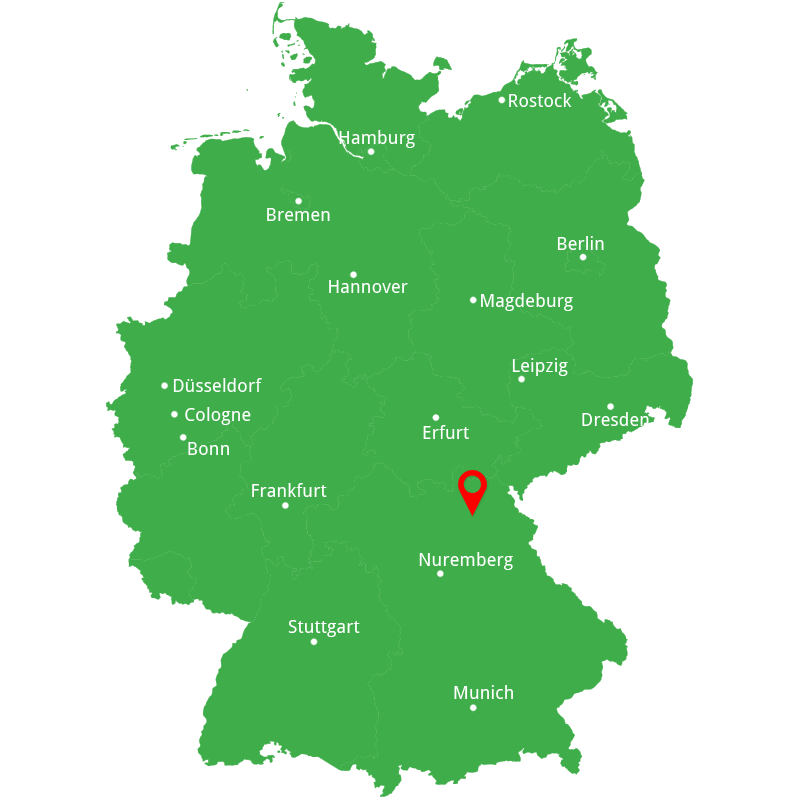 Best known for hosting the annual Bayreuth festival, this German town is dominated by its musical history and offers both a Wagner and a Liszt museum. Wagner's house and tomb can also be visited, but the town has much more to offer than its famous musical history. The Neuse Schloss and park are centrally located and Bayreuth offers an excellent Botanical garden.

The city was transformed in the 18th century when Margravine Wilhelmine, sister to Frederick the Great, ruled. Her keen artistic eye and creative tendencies helped during the building of the New Palace and various parks and really put Bayreuth on the map. Today, we can look back upon these buildings, along with the UNESCO-listed opera house, and admire the architecture of this Bavarian beauty.

Whilst it may be a lot more modern than most of the palaces built around the same time, the New Palace is a shining example of Bayreuth rococo architecture. Designed, in part, by Margravine Wilhelmine, the interior shows all of her artistic flair and a range of extravagant rooms will delight guests on their tour. Highlights include Wilhelmine's Japanese Room, The Cabinet of Fragmented Mirrors and the Margrave's Palm Room.

This well-landscaped rock garden earned its name when one woman cried 'c'est sans pareil' (it's without equal) upon seeing it. These former hunting grounds of the margraves are attached to the Zwernitz Castle and are the garden is still an impressive sight today. Alongside the flora, various buildings have been built into and on top of rock formations to give the park a striking layout. Sanspareil is also home to the Oriental Building, which has an old beech tree inside its enclosed courtyard.

Another complex designed by Margrave Friedrich and his wife Wilhelmine, the Fantaisie Palace was completed by their daughter. The palace displays three different styles of architecture (Rococo, Sensibility and Historicism) and is now home to the Garden Museum. A multi-media exhibition within the museum tells the story of how the palace came to be.

The Altes Schloss Hermitage, 3 miles north of Bayreuth, makes an appealing departure from the sonorous and austere Wagnerian mood in much of the town. It's an early-18th-century palace, built as a summer retreat and remodelled in 1740 by the Margravine Wilhelmine. Although her taste is not much in evidence in the drab exterior, the interior, alive with light and colour, displays her guiding hand in every elegant line. The extraordinary Japanischer Saal (Japanese Room), filled with Asian treasures and chinoiserie furniture, is the finest room. The park and gardens, partly formal, partly natural, are enjoyable for idle strolling. Fountain displays take place at the two fake grottoes at the top of the hour 10-5 daily.

Near the centre of town, in the 1887 Maisel Brewery building, the Brauerei und Büttnerei-Museum reveals the tradition of the brewing trade over the past two centuries. The brewery operated here until 1981 when its much bigger home was completed next door. After the 60-minute tour, you can quaff a cool, freshly tapped beer in the museum's pub, which has traditional Bavarian Weissbier (wheat beer).

The Festspielhaus is surprisingly plain but this look is explained partly by Wagner's desire to achieve perfect acoustics. The wooden seats have no upholstering, for example, and the walls are bare. The stage is enormous, capable of holding the huge casts required for Wagner's largest operas. Performances take place only during the annual Wagner Festival, still masterminded by descendants of the composer. In 2012, the Margravial Opera House was added to the UNESCO World Heritage list.

The B-22 highway cuts through the Fränkische Schweiz - or Franconian Switzerland - which got its name from its fir-clad landscape. Just north of Hollfeld, 14 miles west of Bayreuth, the Jurassic rock of the region breaks through the surface in a bizarre, craggy formation known as the Felsgarten (Rock Garden).

Within the town centre itself, the Bayerischer Hof contains the town's most intriguing dining choices. The hotel has a selection of restaurants offering both French and Franconian cooking. The Hans-Sachs-Stube, an air-conditioned replica of an old inn, has walls covered with pictures of famous opera singers who have performed in Bayreuth or dined here. You can also dine at the hotel's bistro, Spanische Stube. The best cuisine, however, is found at the Gendarmerie, the main a la carte restaurant. The food is very refined here, combining inventive French dishes with the best of Franconian fare. Each dining room has a different decor, although the seasonally adjusted menu is the same in all three.

The building, which lies outside the centre of town, was constructed as a private hunting lodge and has a hexagonal baroque tower. The cuisine follows the culinary traditions of France, Italy, and Germany with menu items that might include lobster risotto with basil, stuffed halibut with caviar sauce and kohlrabi noodles, and terrine of sweetbreads. There is also an impressive wine list.

This restaurant is cosy and popular; it offers some of the best value food in town. Set in the heart of town, Oskar's has a large central dining room, designed like a greenhouse and flooded with sunlight, and a trio of smaller, cosier Stuben that have wood-panelling and a sense of updated Franconian tradition. Menu items include lots of old-style Franconian favourites, such as loin of beef with horseradish sauce and Bayreuther-style Klos (potato dumplings), roasted pork, schnitzels, baked salmon, and sauerbraten. There's also a short list of pasta, soups, and salads. Whenever a particular vegetable or fruit comes into season, expect lots of emphasis on it in the list of daily (or weekly) specials.

This charming and well-managed restaurant is partially contained in a mill that was built in the 1600s. The rest is in a modern (but antique-looking) extension that was added in the late 1970s. Today, views from its tables encompass the Mühlbach River and its cuisine focuses on the specialities of Franconia, particularly in the use of freshwater fish such as carp and trout. The fish are kept in large holding tanks and aquariums, and can be prepared in virtually any way you specify.

The Hofgarten Passage, off Richard-Wagner-Strasse, is one of the fanciest shopping arcades in the region. It is full of smart boutiques selling everything from German high fashion to simple local craftwork.

Discover more
Did you know?
Unique City
Special Events
Discover seasonal events
No items found.
No items found.
Stay at Local
Maritim Hotels
Our preferred European hotel partner
No items found.
Subscribe to our Tours & Land Holidays offers
JOIN NOW
Thank you! Your submission has been received!
Oops! Something went wrong while submitting the form.
Book Your
Excursions
By clicking an excursion below, you will be taken to the website of our booking partner Viator. Viator is a TripAdvisor company and reservations made using this link will be made directly with Viator. Full terms and conditions apply.
Inspiration & Advice
Our Blogs
Find plenty of tips, advice and news stories in our weekly blog posts.
The Ease Of Travelling To And In Germany
Although we like to pretend we don’t, Britons secretly love Germany & its holiday destinations. Here’s how simple it is to get to and around.
READ MORE
7 Things For Foodies To Do In Germany
From Bavaria to Brandenburg, Germany is home to some exciting, enticing and often quirky culinary attractions. Here are just a few to look out for.
READ MORE
Untold UNESCO: European World Heritage Sites You Never Knew Existed
There are UNESCO World Heritage sites all over Europe, but here are few that you will have never heard of and which are well worth a visit.
READ MORE