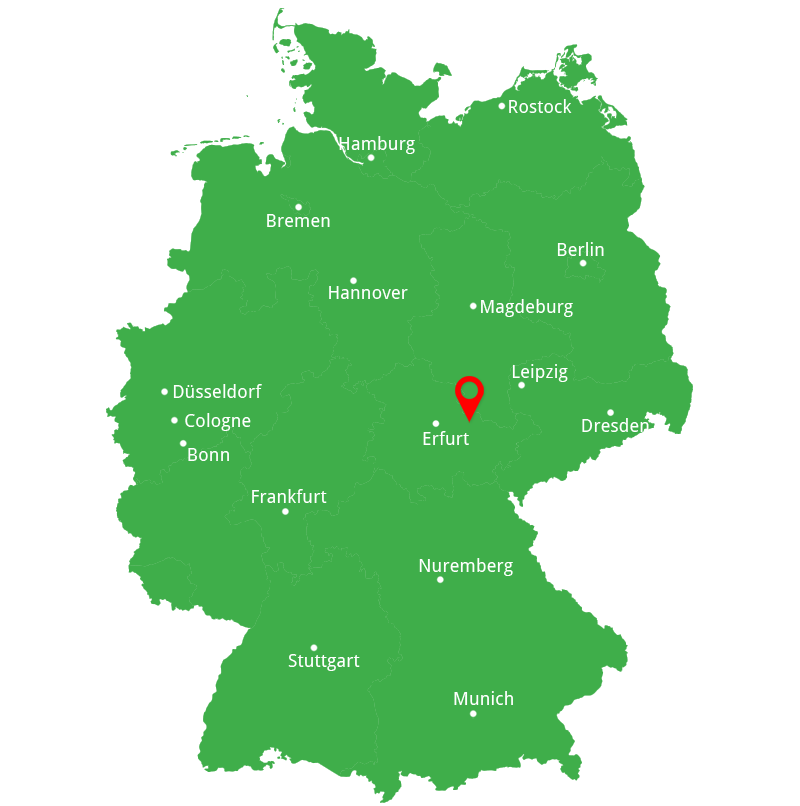 From art and architecture to palaces, parks and gardens, Weimar has so much to offer. The many beautiful locations in and around the city have always been devoted to relaxation and pleasure - why not relax in one of the many coffee houses or take a walk through the beautiful Park an der Ilm? Weimer is also the traditional home of 'German thinkers', with both Goethe and Schiller residing here at one time. Home of the famous Bauhaus University, the city was instrumental in the development of the important art movement of the last century and is known for its writers and the Anna Amalia library, one of the most important in the world.

Weimar's interesting history is present throughout the town and can most obviously be seen through the buildings and monuments that are now listed as a UNESCO World Heritage Sites. They consist of the houses of Goethe and Schiller, as well as the Duchess Anna Amalia Library and various castles which add to the aesthetic beauty of the town and demonstrate its longstanding history.

This former residence of Franz Liszt offers a chance to gear the great man's music and learn about his life. Whilst he spent his winters in his native Hungary, he lived here during the summers and also used the house as a school for young performers. The study and living room still contain original furnishings used by Liszt himself.

Park on the Ilm

The Park on the Ilm is a beautiful park created in the 18th century, home to Goethe's Garden House and the Roman House which was the residence of the Grand Duke during summer months. The park itself follows the River Ilm and is in a stunning rural setting.

The Bauhaus Museum is where more than 300 exhibits are dedicated to Bauhaus history and its artists, whose ideas are today seen as the most effective and successful export of German culture in the 20th century. A world-renowned institute, the Bauhaus will celebrate its 100th birthday in 2019 and a range of events is planned.

As well as musical links to greats such as Bach and Liszt, Weimar has links to literary culture via famous poet Johann Wolfgang von Goethe. The author of 'The Sorrows of Young Werther' lived in the city from age 26 until his death and now his former residence has been turned into a museum which honours his life and work.

Having been rebuilt after a fire in 2004, this historic library is still home to the famous Rococo Hall. It was named as a World Heritage Site in 1998 and houses many important literary texts from the 9th century up to today.

Having faced many fires throughout its history, the Weimar Castle has been repeatedly remodelled and redesigned. Once the home of the dukes of Saxe-Weimar and Eisenach, it now features a wing dedicated to the famous poets who have lived in Weimar and a museum. All the exhibits are displayed in the original rooms of the castle and a definite highlight is the Cranach Gallery, which features works by the old German masters.

Weimar's traditional cuisine, consisting mainly of stews with dumplings, is prevalent in many of the restaurants in the area. Elephantenkeller is particularly renowned for its traditional food, also specialising in pickled trout and serving black beer, which must be tried if visitors want to fully immerse themselves in the culture. Zum Zwiebel is also loyal to the old culture and the cherry wine here is a delicious delicacy.

Residenz is a more casual restaurant serving mainly café food and particularly excellent cakes. It is very popular with locals and tourists alike and therefore boasts an inviting and vibrant atmosphere.

The majority of shopping done in Weimar is focussed on the pedestrian streets of Schillerstrasse and Wielandstrasse where shops offer a variety of goods. There are numerous clothing boutiques which house products from both local and regional designers, encouraging a style unique to Weimar. There are also quaint shops which sell the perfect souvenirs, from hand-crafted jewellery to pottery.

The extensive number of books shops which line the streets cannot be ignored. They offer a variety of classical German and Weimar literature. Antique shops are also extremely popular.

Nightlife in Weimar consists of student clubs, fashionable bars and live music establishments which reside particularly in the old quarter of the town.

The main student club is Studentenclub Kasseturm, known for its extremely reasonably priced drinks. It is the oldest club of its kind located in a medieval tower. Studentenclub Schützengasse is another which has live rock music upstairs and a DJ downstairs with a beer garden outside.

C-Keller Galerie is both an art gallery and a café bar which serves beer and wine. It is a popular place with a relaxed atmosphere.

The Bistro Corona is both a bar and a restaurant and plays a medley of hits from the 70s and 80s.

This monument sits in a park on Beethovenplatz and commemorates the relationship Goethe had with Persian poet Hafiz and his works. Regarding him as his intellectual equal, Goethe used Hafiz's writing to inspire his own works surrounding the Muslim faith.

Locals and visitors alike are surprised to see a Russian Orthodox Church in the middle of a Lutheran city, but this beautiful structure was built to honour Maria Pavlovna. The daughter of a Russian emperor, Pavlovna was the wife of Saxe-Weimar Duke Karl Friedrich.

In the Park on the Ilm, you'll find the only statue of Shakespeare in Europe outside of Britain. It was erected to celebrate the 40th anniversary of the German Shakespeare Association.

Discover more
Did you know?
Unique City
Special Events
Discover seasonal events
No items found.
No items found.
Stay at Local
Maritim Hotels
Our preferred European hotel partner
No items found.
Subscribe to our Tours & Land Holidays offers
JOIN NOW
Thank you! Your submission has been received!
Oops! Something went wrong while submitting the form.
Book Your
Excursions
By clicking an excursion below, you will be taken to the website of our booking partner Viator. Viator is a TripAdvisor company and reservations made using this link will be made directly with Viator. Full terms and conditions apply.
Inspiration & Advice
Our Blogs
Find plenty of tips, advice and news stories in our weekly blog posts.
The Ease Of Travelling To And In Germany
Although we like to pretend we don’t, Britons secretly love Germany & its holiday destinations. Here’s how simple it is to get to and around.
READ MORE
7 Things For Foodies To Do In Germany
From Bavaria to Brandenburg, Germany is home to some exciting, enticing and often quirky culinary attractions. Here are just a few to look out for.
READ MORE