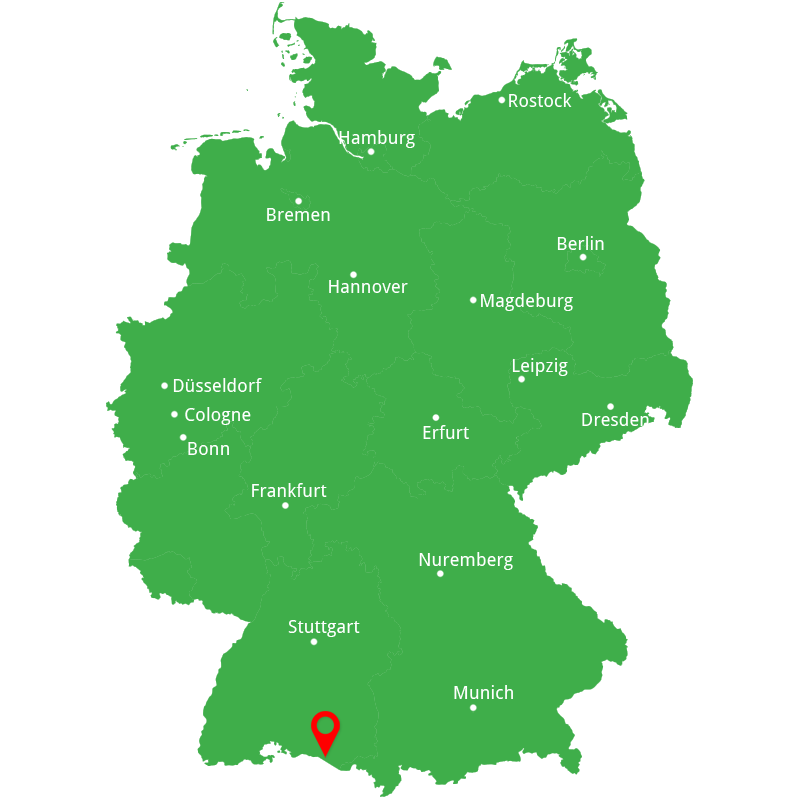 Bodensee, also known as Lake Constance, flows from the river Rhine and is shared by three neighbouring countries, Germany, Austria and Switzerland. A fantastic summer or winter destination, its serene shores offer something for everyone, from sailing, windsurfing and swimming to cycling along the 273 km-long Bodensee-Radweg cycle path or simply strolling through the lively university town of Constance. The town, which has remained relatively unchanged since the Middle Ages, is also perfectly placed as a base for further exploration of the surrounding regions, including Switzerland, Austria and Liechtenstein.

If you are visiting in the run up to Christmas, you will be delighted by the large Christmas market which takes place in the historic city centre. Over 130 artisans, traders and food vendors trade their wares here and the market also boasts the unique Christmas Ship, moored in the harbour.

The German-Swiss Oktoberfest on Lake Constance offers young and old a varied programme including fun and thrills from the amusement park with its Ferris wheel, merry-go-round, bumper cars, fairytale railway and more.

The second Saturday in August plays host to the highlight of the summer - the Seenachtfest. This is a festival and spectacular firework show, combined with a children's theatre, a puppet stage, creative corner, fairytale tent, nature workshop, artisan market and lots more.

Lake Constance is home to many cultural highlights including three UNESCO World Heritage Sites; the island of Reichenau and the Convent of St. Gall are perceived as the cradles of European civilisation. In 2011 the Stone Age pile dwellings around the Alps were added.

There are around twelve routes around Lake Constance and selected city trips within Germany to offer you a whole new outlook.

The castle looks back on more than one thousand years of European history and can trace its origins to the 7th century and the Merovingian Dynasty under King Dagobert I.

This island close to the shore near Koblenz is most famous for its beautiful flower gardens. There are giant sequoias, millions of roses and rows and rows of rhododendrons, to name just a few. There is so much else to see as well, though, including the baroque castle, the butterfly house and a petting zoo.

Not only does the 'White Fleet' ferry people across the lake, there are also regular themed cruises on board the ships. These include gala dinners, dancing evenings and firework spectaculars.

This themed tourist trail focuses on attractions related to nature and baroque culture. It stretches for more than 300 miles and includes Friedrichshafen on the shores of the lake.

Situated in Switzerland, close to the town of Neuhausen am Rheinfall, the Rhine Falls display the power of one of Europe's most beloved rivers. There are many different viewing platforms which allow you to see the waterfall from different perspectives.

There are many beaches on the shores of the lake where locals and tourists love to cool off in the summer.

Bodensee's shoreline is filled with hiking and biking trails that will allow you to explore the towns and cities surrounding it. You will travel through vineyards and apple orchards as you discover what it's really like to live in the area.

Bodensee cuisine tastes influence from all four countries around its shores. Here are just a few dishes to try.

Traditional Swiss potato cakes that can be served as a side dish or a delicious appetiser.

Roast pork with a name which means 'pig's scapula'. The meat is cooked slowly and glazed in a sticky beer sauce.

Another Swabian dish, these are pasta parcels filled with mince.

Lichtenstein's version of Kässpätzle, which is often served with a sweet apple puree.

Similar to Falmkuchen, these are really thin 'pizzas' with toppings that include cream and ham, smoked salmon, and sweet plums.

The middle of Bodensee is technically classed as international waters and is the only place in Europe where borders do not exist.

Unique City
Special Events
Discover seasonal events
No items found.
No items found.
Stay at Local
Maritim Hotels
Our preferred European hotel partner
No items found.
Subscribe to our Tours & Land Holidays offers
JOIN NOW
Thank you! Your submission has been received!
Oops! Something went wrong while submitting the form.
Book Your
Excursions
By clicking an excursion below, you will be taken to the website of our booking partner Viator. Viator is a TripAdvisor company and reservations made using this link will be made directly with Viator. Full terms and conditions apply.
Inspiration & Advice
Our Blogs
Find plenty of tips, advice and news stories in our weekly blog posts.
A Culinary Tour Of Lake Constance
Kevin Johnson visited the towns & cities surrounding Lake Constance on a culinary tour that offered much more. Here’s a look at his trip in his own words.
READ MORE
5 More Tourist Routes Through Germany
Each one of these mapped-out pathways showcases a different aspect of German culture or history, giving you an interesting way to explore the country off the beaten track.
READ MORE
Europe's Top 5 Green-Fingered Attractions
Gardening is one of Britain’s favourite pastimes, with around 27 million people enjoying the hobby. We have some great attractions here, but what about abroad?
READ MORE