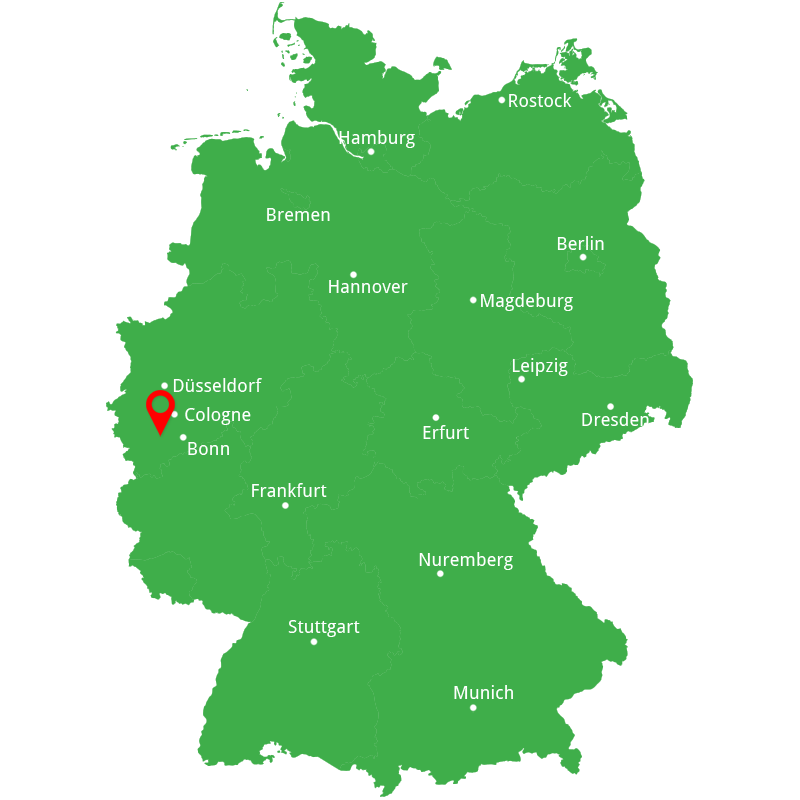 Surrounded by the beautiful scenery of the Rhine Valley, Germany's Brühl is widely regarded as the pearl of the Rhine-Erft region with its fine selection of culture and gastronomic delights. Traces of Brühl's history and its development up to the present day are reflected in the enchanting and lively Old Town.

As you are exiting the train station at Brühl, you will immediately see the Brühl Palace, Augustusburg. The palaces were built at the beginning of the 18th century by the Archbishop-Elector of Cologne, Clemens August of Bavaria (1700-1761) of the Wittelsbach family. The architects were Johann Conrad Schlaun and François de Cuvilliés. The magnificent staircase in the Augustusburg Palace was designed by Johann Balthasar Neumann.

Palace Falkenlust is a small hunting lodge with an exceptionally charming interior. It was built for Elector Clemens August between 1729 and 1746, according to plans drawn up by Francois de Cuvillés. The park also contains the "Muschelkapelle" (Shell Chapel), which was designed to resemble a hermit grotto and consecrated in 1740. The Palaces Augustusburg and Falkenlust and the park were collectively designated a UNESCO cultural and natural World Heritage Site in 1984.

On 3rd September 2005, the Max Ernst Museum was officially opened with a ceremony at which Horst Köhler, President of the Federal Republic of Germany, honoured the life's work of the artist. This is the first time that the work of the great Dadaist and Surrealist Max Ernst (1891-1976) has been showcased at a single location. The wealth of works displayed - comprising all art forms and periods - is unsurpassed, and includes over 60 sculptures from the artist's private collection and a large part of his graphic oeuvre. The highlight of the exhibit is the selection of 36 so-called D-Paintings - birthday presents from the painter, sculptor and writer to his wife, Dorothea Tanning, showing his love for her and given every year.

Discover more
Did you know?
Unique City
Special Events
Discover seasonal events
Brühl Christmas Market
Brühl Christmas markets offer relaxing breaks and holidays to the finest traditional German Christmas markets.
Find out more
No items found.
Stay at Local
Maritim Hotels
Our preferred European hotel partner
No items found.
Subscribe to our Tours & Land Holidays offers
JOIN NOW
Thank you! Your submission has been received!
Oops! Something went wrong while submitting the form.
Book Your
Excursions
By clicking an excursion below, you will be taken to the website of our booking partner Viator. Viator is a TripAdvisor company and reservations made using this link will be made directly with Viator. Full terms and conditions apply.
Inspiration & Advice
Our Blogs
Find plenty of tips, advice and news stories in our weekly blog posts.
7 Things For Foodies To Do In Germany
From Bavaria to Brandenburg, Germany is home to some exciting, enticing and often quirky culinary attractions. Here are just a few to look out for.
READ MORE
The Ease Of Travelling To And In Germany
Although we like to pretend we don’t, Britons secretly love Germany & its holiday destinations. Here’s how simple it is to get to and around.
READ MORE
5 Fantastic Theme Parks For Thrill-Seeking Fun
Britain has some excellent theme parks, but here are some exciting and thrilling attractions in mainland Europe.
READ MORE
Ode To Cologne
Here are the highlights from Chris Mayhew's recent trip to the German city of Cologne.
READ MORE