Sightseeing hours for the cathedral are from 11 am on weekdays and from 12.30pm on weekends. It is not possible to enter during services.

If you would like to take photos, you will need to buy a wristband for €1.

English guided tours take place every day at 2 pm and cost €4 per person. These can be bought from the Dominformation and it’s the only way you can see the Throne of Charlemagne.

Treasury tickets cost €5 per person and opening times are: 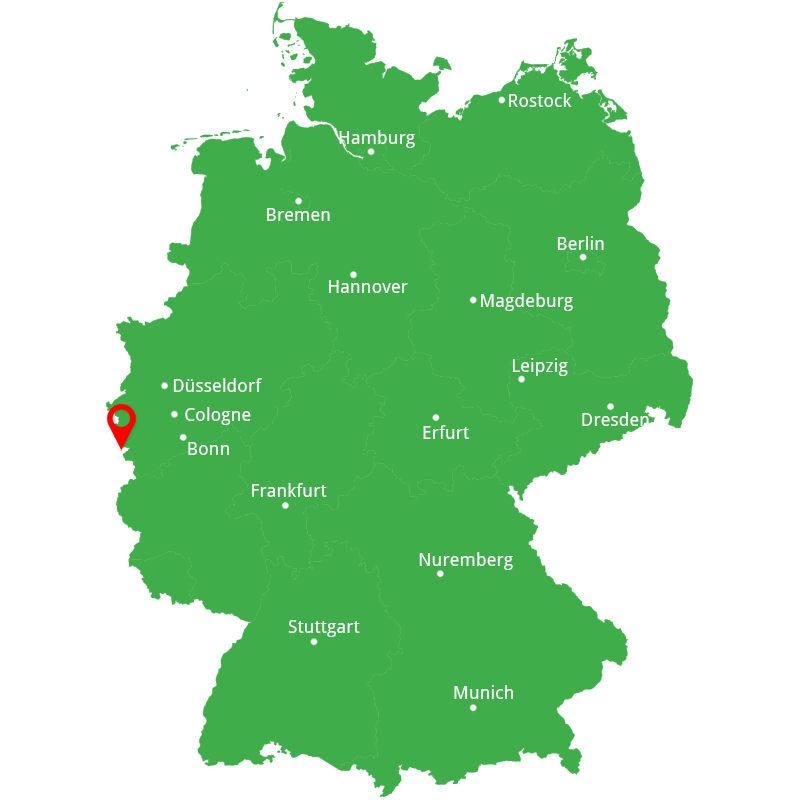 The elaborate cathedral in Aachen was the first German monument to be added to UNESCO’s World Heritage list, in 1978. Whilst trying to build his own version of Rome, it was Emperor Charlemagne who, around the year 800, constructed the original core of the building in the form of an octagonal chapel known as St Mary’s Church. This later become his burial place and is where his remains can still be found today.

The chapel was the tallest building in the country for a long time and has been added to over the years to create the cathedral that you see today. The Gothic choir hall was installed during the 14th century, whilst more chapels were added to the north and west sides a century later. Building work continued throughout the 18th and 19th centuries too, with the Hungarian Chapel and Western Tower being added respectively.

Due to its significance to the Christian faith and the fact that it was the setting for the coronation of Roman-German kings between 936 and 1531, it remains a place of pilgrimage. People come to see the cloth relics – said to be baby Jesus’s diaper, John the Baptist’s decapitation cloth and Christ’s loincloth – as well as the Cross of Lothair, which lies in the treasury.

Discover more
Did you know?
Unique City
Special Events
Discover seasonal events
Aachen Christmas Market
Aachen Christmas markets are popular festive breaks with visitors on traditional holidays to the German Christmas markets.
Find out more
No items found.
Stay at Local
Maritim Hotels
Our preferred European hotel partner
No items found.
Subscribe to our Tours & Land Holidays offers
JOIN NOW
Thank you! Your submission has been received!
Oops! Something went wrong while submitting the form.
Book Your
Excursions
By clicking an excursion below, you will be taken to the website of our booking partner Viator. Viator is a TripAdvisor company and reservations made using this link will be made directly with Viator. Full terms and conditions apply.
Inspiration & Advice
Our Blogs
Find plenty of tips, advice and news stories in our weekly blog posts.
4 Underrated Christmas Markets For 2016
There are hundreds of Christmas markets in Europe, more than the ones in the capitals. So here are a few different options that you may not have considered.
READ MORE
4 New European UNESCO World Heritage Sites For 2017
UNESCO has added 21 new sites to its World Heritage list this year, including the Lake District. So, which places in Europe can now boast this important honour?
READ MORE
Untold UNESCO: European World Heritage Sites You Never Knew Existed
There are UNESCO World Heritage sites all over Europe, but here are few that you will have never heard of and which are well worth a visit.
READ MORE
5 Historic Highlights Found In The Historic Highlights Of Germany
These historic attractions show why these cities, and 12 others, are named within the Historic Highlights of Germany.
READ MORE