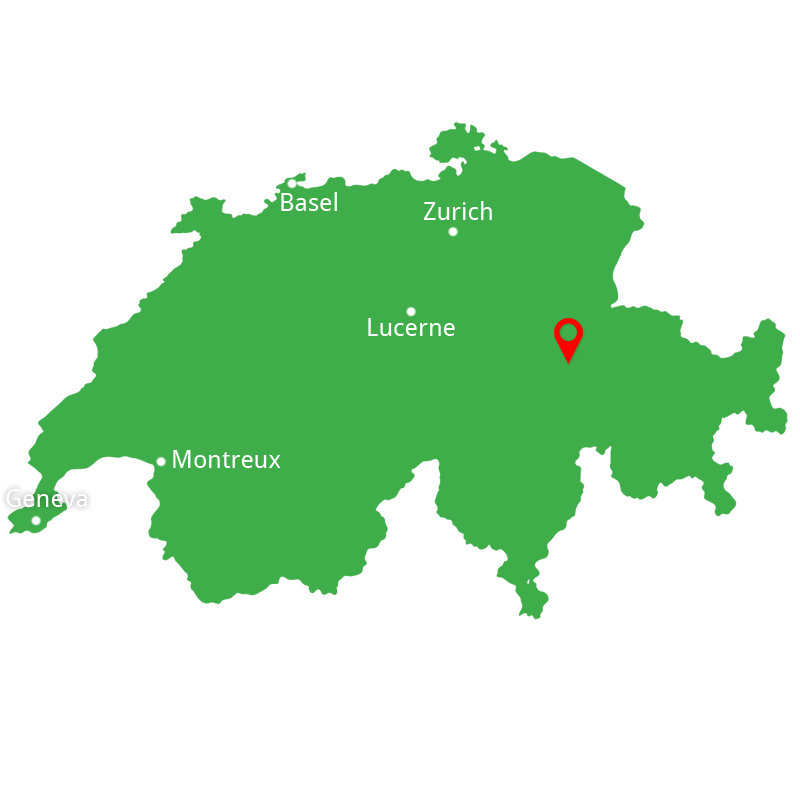 Laax is a great skiing resort with 220km of excellent slopes. And with over 50 restaurants and 40 bars, it is also a great place to have fun. In summer, the region is good for hiking and biking with 237km of marked paths and even more official mountain bike routes, including a 7km downhill trail. Laax is located just a few kilometres from Flims, another interesting summer and winter resort.

If you would prefer to stay elsewhere in Switzerland, we can offer many other destinations in the country, including Basel city breaks and hotels in Lausanne.

Created 10,000 years ago by a thundering rock slide, the Ruinaulta Rhine Gorge, is often referred to now at the swiss Grand Canyon. Easily reached on foot, over water or by train or bike, the gorge offers a wild and romantic natural setting with exciting river rafting possibilities.

Parc la Mutta is the largest and one of the most important Megalith sits in the whole of Switzerland. The park consists of 34 standing stones, each erected during the Middle Ages and acting as an ancient place of worship. The stones were also used as a method for calculating the calendar, and are set amoung the glorious mountaint scenery of Laax.

Designed by the Porsche Design Studios, these futuristic ski lifts features the first swivelling and solar-panelled seats. Tilt your seat to 45 degrees to ejoy unparalled views of the slopes around you.

Discover more
Did you know?
Unique City
Special Events
Discover seasonal events
No items found.
No items found.
Stay at Local
Maritim Hotels
Our preferred European hotel partner
No items found.
Subscribe to our Tours & Land Holidays offers
JOIN NOW
Thank you! Your submission has been received!
Oops! Something went wrong while submitting the form.
Book Your
Excursions
By clicking an excursion below, you will be taken to the website of our booking partner Viator. Viator is a TripAdvisor company and reservations made using this link will be made directly with Viator. Full terms and conditions apply.
Inspiration & Advice
Our Blogs
Find plenty of tips, advice and news stories in our weekly blog posts.
The Alps And Downs Of A Trip To Switzerland
Jeanette Coppin was given the chance to tour Lake Lucerne, including a journey on the stunning Bernina Express. Here’s her trip in her own words.
READ MORE
5 Dishes To Try When Travelling To…Switzerland
Here is a range of delicious dishes that you should definitely try during your time in Switzerland.
READ MORE
Why Switzerland Is Europe’s Adrenaline Capital
Switzerland is more than prepared to cater for travellers who are seeking their next adrenaline rush, providing many activities that aren’t for the faint-hearted. Here are just a few that you may want to add to your bucket list.
READ MORE
5 Exciting Activities In Switzerland’s Jungfrau Region
A trip to Jungfrau can be as relaxing or active as you want it to be, but here are a few exciting activities whilst you’re here.
READ MORE