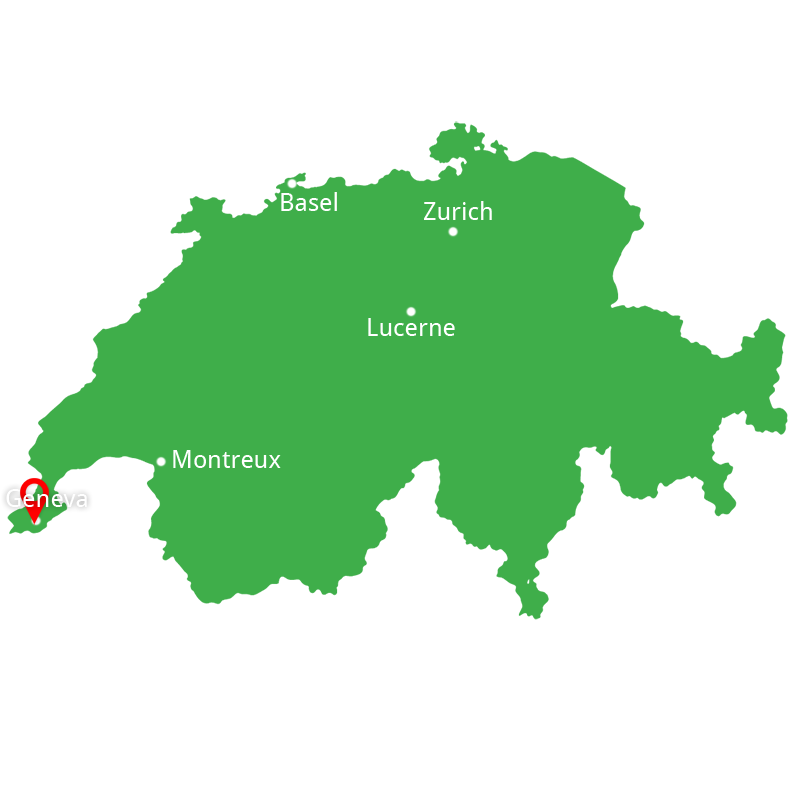 Our Geneva city breaks take in this beautiful, cosmopolitan city in the French-speaking part of Switzerland, framed by the Alps and situated at Europe's largest lake, Lake Geneva. Geneva has Switzerland's second-largest population and is recognised as being one of the world's most important cities for regular meetings of international committees, although Geneva is much more than this.

The city is not only the world capital of watchmaking but also a place of wonderful lakeside parks, world-class cultural events and exhibitions as well as gastronomic delights. It is home to more than 200 international organisations and is widely recognised as the City of Peace. As an open-minded city, Geneva makes its guests soon feel at home.

Stroll the promenades around the lake, soak up the atmosphere and relax in one of the lakeside parks or cafés. For a unique perspective of the city, take a one or two-hour boat cruise.

Stroll along the cobblestone streets and visit some of the beautiful antique stores located throughout the Old Town. Head to the Art and History Museum or the Maison Tavel, Geneva's oldest house, and go and see Saint Peter's Cathedral.

Take a tour of the European Headquarters of the United Nations followed by a visit to the Red Cross Museum across the street.

Located near the fountain at Bourg-de-Four, La Clemence is a popular meeting spot, boasting the largest terrace in the Old Town and a friendly atmosphere.

Popular with the international crowd, the Alhambra is a trendy but friendly bar, spinning world music and serving a full range of cocktails. There are comfortable couches to laze upon and interesting artwork on the walls.

As Geneva's premier classical music venue, Victoria Hall has attracted the finest orchestras from around the world since its inauguration in 1894. The Rococo style building seats 1,850 and is renowned for its exceptional acoustics.

Have an authentic experience by doing some of these typically Genevan activities:

Take to the water in a traditional Belle Epoque era steamship. You can travel across to Lausanne via some of the charming French villages situated on the lakeside.

There have been public baths at this point on the lake since 1890 and they serve as a lively meeting point for locals when the weather is hot. You can take a dip in the water, lounge in the sun or try water sports such as paddleboarding.

The regular food markers give you the chance to converse with local producers and try some Genevan delicacies.

An iconic image of Geneva, the Jet d'Eau has been erupting from the lake since 1891. It shoots 140 metres into the air and gets through 500 litres every minute. Just north of Geneva, Berne's "lac de Neuchatel" is another popular visitor attraction with those arriving in western Switzerland. Our Bern City Breaks offer spectacular views of the surrounding lakes and good transport links to Geneva.

The European headquarters of the United Nations is situated within the Parc de l'Ariana. Visitors can take a look inside the Human Rights Room, the Salle des Pas Perdus and the Assembly Hall as part of daily guided tours.

The Globe of Science and Innovation

This globe-shaped landmark gives visitors an idea of the type of work that goes on at the European Council for Nuclear Research (CERN). As well as other interesting exhibitions, 'The Universe of Particles' takes a closer look at the Big Bang and the atoms all around us.

International Museum of the Red Cross and Red Crescent

Geneva is the birthplace of the Red Cross, founded by Henry Dunant. This museum looks at his important work in establishing what is now one of the world's leading charities and also focuses on the emotional side of humanitarian work.

A look around the historic Old Town (Switzerland's largest) will uncover the Town Hall. It was here, in the 'Alabama' room, that the first ever Geneva convention was signed in 1864

Discover The City of Parks

One nickname often given to Geneva is the 'City of Parks'. Spend some time exploring Parc La Grange's Rose Garden or the 'Flower Clock' in the English Garden to see the natural side of this beautiful city.

Modelled on a Parisian brasserie, this Geneva hotspot is the consummate French bistro serving up all things French from pot-au-feu to charcuterie.

This popular restaurant is housed in a Swiss chalet and features live traditional Swiss music and yodelling every night. Menu highlights include the famous cheese fondue.

Although not as fashionable as the city centre, there is an equally large selection of clothing and jewellery on display along Rue du Mont Blanc and its surrounding streets. This is the best area to pick up typical Swiss souvenirs.

If you're looking for art or antiques, the Old Town is the place for you. The 'Grand Rue' is the primary shopping street but don't be afraid to discover the Old Town's many winding alleys as well.

Mary Shelley wrote her famous novel Frankenstein whilst staying at the Villa Diodati. You're sure to recognise a number of references from the book during your Geneva city break.

Every year, the start of spring is officially announced when the first bloom appears on the Chestnut tree outside the parliament building.

Unique City
Special Events
Discover seasonal events
No items found.
No items found.
Stay at Local
Maritim Hotels
Our preferred European hotel partner
No items found.
Subscribe to our Tours & Land Holidays offers
JOIN NOW
Thank you! Your submission has been received!
Oops! Something went wrong while submitting the form.
Book Your
Excursions
By clicking an excursion below, you will be taken to the website of our booking partner Viator. Viator is a TripAdvisor company and reservations made using this link will be made directly with Viator. Full terms and conditions apply.
Inspiration & Advice
Our Blogs
Find plenty of tips, advice and news stories in our weekly blog posts.
4 Unique Ways To Explore Geneva
With free public transport for the duration of your stay, it's easy to navigate around Geneva. However, here are a few more unique ways to explore the city.
READ MORE
5 Dishes To Try When Travelling To…Switzerland
Here is a range of delicious dishes that you should definitely try during your time in Switzerland.
READ MORE