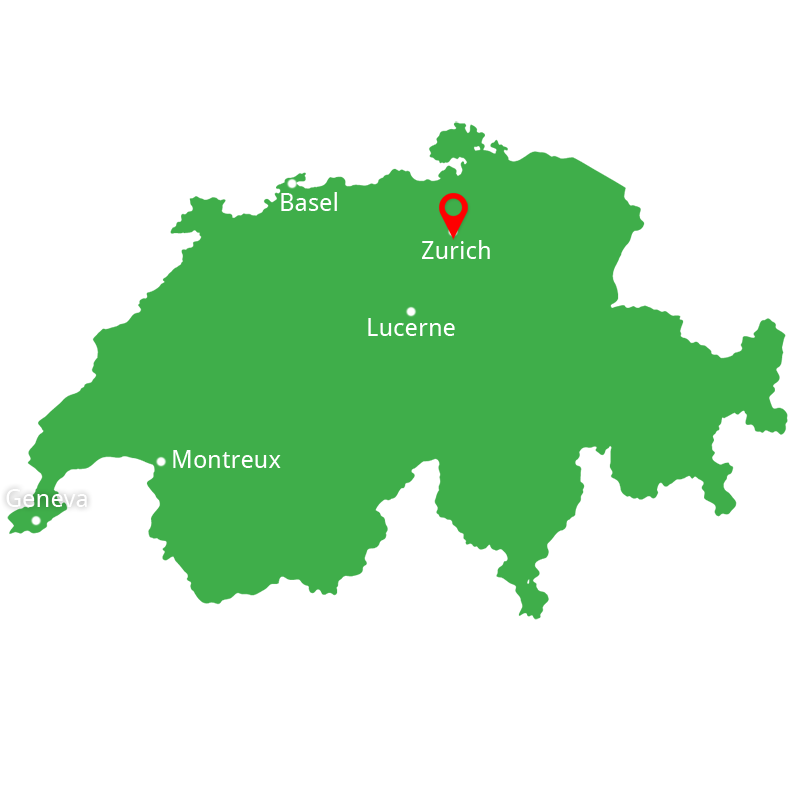 A boutique metropolis, situated directly on Lake Zurich with a beautifully preserved Old Town and the trendy Zurich-West neighbourhood, Zurich is nestled amidst hills, rivers and lakes and offers over 50 museums and 100 art galleries to choose from. Add to this an exquisite cultural events calendar, which offers a huge variety of productions all year round and an international and diverse gastronomic scene, and Zurich becomes very appealing.

The city is a shopper's paradise, with international fashion labels, jewellery, watches, bookshops and farmers markets offering something for everyone. From Zurich, there are some great ways to see the beauty of the region including the Uetliberg mountain, which towers over the city and offers panoramic views of the lake and the Alps. The Polybahn funicular railway also offers great views of the city.

For a more in-depth look at the city, check out our definitive guide to a Zurich city break.

The historic heart of the city beats on both sides of the Limmat river. Here guild houses, churches, historic squares, and hidden-away places nestle alongside each other. At night, the many bars, restaurants and street artists turn the “Niederdorf” into an exciting centre of entertainment for the awaiting public.

Those who haven’t seen Lake Zurich, weren’t in Zurich. When standing next to the famous Ganymede statue on the Bürkliterrasse, you can see as far as the Swiss Alps.

One of the three major churches in the city, the twin towers of the Grossmünster are not only Zurich’s most prominent landmark, visitors can also climb up the Karlsturm tower and enjoy a breathtaking view over the city.

With its newly opened extension building by the architect David Chipperfield, the most important collection of Classical Modernism in Zurich and attractive temporary exhibitions, a visit to the Kunsthaus is an absolute must for art enthusiasts.

Once Zurich’s industrial district, today the neighbourhood is an ode to creativity, design and architecture with numerous restaurants, bars, galleries and quirky boutiques.

A dream for all chocolate fans: on Lake Zurich, Lindt invites visitors to a multimedia experience world.

The best way to take in a city is from above. The Uetliberg lookout is just a short train ride and a 10-minute walk away, and the view over the city, lake and Alps is spectacular.

Zurich’s nightlife is renowned far and wide and offers the largest and most colourful choice of parties in the whole of Switzerland.

One of the most popular places to seek out nightlife in Zurich is the Old Town, on the left bank of the River Limmat, with many bars and cafes tucked away on the side streets such as Niederdorfstrasse and Oberdorfstrasse. New bars and clubs keep opening up in the city, especially to the west of the Zurich Main Train Station in the fourth and fifth districts, around Langstrasse, Escher-Wyss-Platz and in Zurich-West.

The oldest vegetarian restaurant in Europe (opened in 1898) and still one of Zurich's gastronomic highlights. Its main attraction is a large salad bar, containing more than 40 different types of freshly prepared vegetables. The restaurant is also known for its vegetarian Indian specialities.

One of Zurich's most famous restaurants with a long history serving some of the best food in town. The decor includes original paintings by Klee, Chagall, Matisse, Miró, Kandinsky, Braque, Bonnard, and Picasso.

This fine dining restaurant is an insider tip for gourmets and advocates of fair trade. With great dedication and commitment, the young team headed by chef Fabian Fuchs do everything they possibly can to create for their guests a perfect lunch or evening meal.

The feel-good oasis at the foot of the Prime Tower, in Zurich-West: here, visitors can find tiny stores, art, a garden community, and a vibrant program of events within the smallest of spaces. Open daily, Frau Gerold has transformed the austere industrial site into a warm and friendly meeting place for city lovers of all ages.

The legendary Fischerstube is much more than simply a restaurant on the lakeshore. With a kiosk, garden, fisherman's hut and lakeside terrace, it’s embedded in a little village all of its own. The menu features many fish dishes with fish from Lake Zurich or nearby waters, but there are also classics like “Zürich Geschnetzeltes” or vegetarian dishes.

In the heart of the city, guests can enjoy one of the most spectacular views over the rooftops of Zurich, Lake Zurich, and as far as the Alps over a delicious drink.

Every year, the festival celebrates food in all its facets over a period of 11 days. Featuring a large street food festival, countless workshops, food tastings and courses, it enriches Zurich’s gastronomic scene.

Zurich's Bahnhofstrasse stretches from the main station down to the shores of Lake Zurich and is one of the world's most exclusive shopping avenues. The 'mother of all shopping streets' guarantees a sophisticated opportunity to window shop. High-quality Swiss goods, jewellers, watchmakers and international designer labels can be found here.

Shopping in Zurich’s Old Town is a unique experience: nowhere else in the city can you find both young and well-established enterprises so close together. Besides the many fashion boutiques there are also a number of unique treasures representing Swiss history and design.

A shopping paradise has been created under 36 viaduct arches. The colourful mix of delicatessens, studio galleries, sport and fashion boutiques is open to the public. At the heart of it all is the Market Hall, where 20 farmers and food vendors from the area offer their products.

Europaallee, situated immediately next to Zurich Main Train Station, is the newest of the city’s neighbourhoods and a vibrant mix of shopping, culture, restaurants and bars.

Zurich is home to a wide range of stores selling environmentally friendly, ethically produced, and long-lasting favourite items. Freitag, Rrrevolve, Round Rivers and Berg und Tal are only some of the examples of how local lables and producers are increasingly setting importance on sustainability.

Discover more
Did you know?
Unique City
Special Events
Discover seasonal events
Zurich Christmas Market
Zurich Christmas markets provide traditional family holidays and romantic couples breaks at European Christmas markets.
Find out more
No items found.
Stay at Local
Maritim Hotels
Our preferred European hotel partner
No items found.
Subscribe to our Tours & Land Holidays offers
JOIN NOW
Thank you! Your submission has been received!
Oops! Something went wrong while submitting the form.
Book Your
Excursions
By clicking an excursion below, you will be taken to the website of our booking partner Viator. Viator is a TripAdvisor company and reservations made using this link will be made directly with Viator. Full terms and conditions apply.
Inspiration & Advice
Our Blogs
Find plenty of tips, advice and news stories in our weekly blog posts.
5 Things Zurich Offers That Aren’t Business
As the wealthiest city in Switzerland and one of Europe’s largest business hubs, the main reason why many people visit Zurich is for a quick business trip or stopover on the way to somewhere else. However, the city can offer plenty more to &hellip;
READ MORE
Your Definitive Guide To A Zurich City Break
If you are looking to visiting Switzerland's largest city, our definitive guide will give you all the information you need.
READ MORE