0800 035 0711
0800 988 3369
Home
/
Destinations
/
Switzerland
/
Basel
Travel to...
Basel
Our Basel city breaks include a number of locations popular for their unique atmosphere and culinary delights. Book yours today to see for yourself. 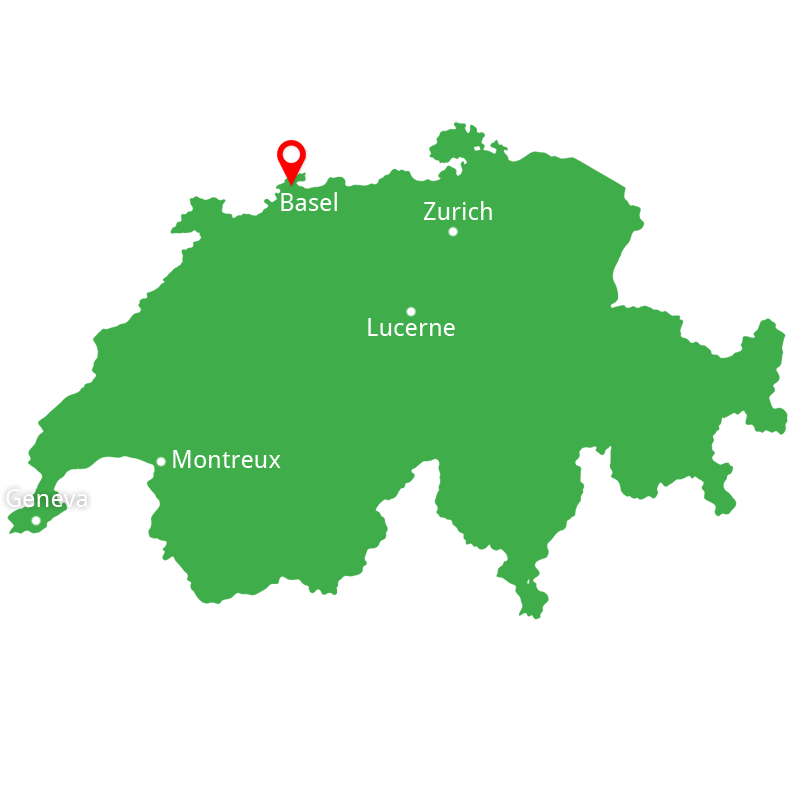 Our Basel city breaks include several locations popular for their unique atmosphere and culinary delights. Located on the River Rhine and borderingFranceand Germany, Basel is regarded as a lively, open-minded city full of contrasts.Switzerland's oldest University City is known as a centre for art, music and architecture. The beautiful old town centre is steeped in heritage and tradition with historic landmarks built by world-renowned architects like Mario Botta and Renzo Piano.

Historic landmarks of the city include the large market square with its richly decorated red sandstone Town Hall and the Romanesque cathedral. The City centre is perfect for the shopaholics among us, with a wide selection of boutiques and designer stores to keep you occupied all day long before going for a drink or local beer to relax after a long days shopping. The Basel Christmas market is something to look forward to during the winter months as the city plays host to the largest and most traditional Christmas market in Switzerland.

No Basel city break would be complete without a trip to the Marktplatz. This monumental market square is located in the shadow of the glorious 14th-century city hall. Take in the colours and aromas of this busy area which is popular with visitors on nearby Freiburg City Breaks. The market sells a vast array of fresh fruit and vegetables as well as locally produced bread and pastries.

The Zoologischer Garten, opened in 1874, is one of the greatest zoos in the world, famous for breeding endangered species in captivity. Covering 26 acres in an urban setting with just a 7-minute walk to the railway station, it has some 4,500 animals of 600 different species. Trained elephants and sea lions perform tricks and the Vivarium is filled with everything from penguins to reptiles.

Some half a century ago, Ernest and Hildy Beyeler set out to acquire some modern paintings to decorate their home. By the turn of the millennium, they had collected one of the greatest private art collections of Switzerland, which they now share with the public in the suburb of Riehen, 15 minutes by tram from the centre near the Swiss borders with France and Germany. See some of the biggest names in art - Pablo Picasso, Andy Warhol, Georges Seurat, Jackson Pollock, Mark Rothko, Joan Miró, Léger, Max Ernst, van Gogh, Kandinsky, Edgar Degas, Cézanne, Alexander Calder, and Georges Braque among others. Under 25s will get free entry if you show ID.

The oldest museum in Switzerland, offering one of Europe's most remarkable collections - everything from the old masters to 20th-century paintings. You approach the massive building through a courtyard graced with sculptures by Rodin, Calder, and others. The collections represent the development of art in the Upper Rhine Valley from the 14th to the 17th centuries, as well as works by outstanding modern artists.

The most dominant landmark in the city has to be the cathedral, looming over everything with its sandstone walls and twin towers. Located behind this, the Pfalz is a peaceful terrace which offers seating complete with fantastic views over the Rhine.

Basel is home to one of the best preserved and prettiest Old Towns in Europe. Many of the buildings date back to the 15th century and these are interspersed with modern architecture that has been created by some of the world’s best architects. The Old Town also features the Town Hall. A characteristic building, it is covered in interesting frescoes and has a beautiful red façade.

Jean Tinguely designed this water feature to be a peaceful place for residents and visitors to take a break. The water travels around various different contraptions, putting a smile on everyone’s face.

A quirky means of transport that has survived the years, four ‘Fahrimaa’ (river ferries) will help you cross the Rhine. These boats can be summoned by using the bell on either bank and are propelled by nothing but the current of the water.

This bridge was first built in 1226 and remains one of the oldest crossings over the Rhine. In the middle, there is a reconstructed version of the chapel (the Käppelijoch) which once stood on the bridge.

The ‘Gate of Spalen’ is one of three gates in the old walls of the city, built in 1400. It is regarded as the most beautiful of that that remain and stands tall in the Old Town.

The Dreiländereck is located in the north of the city and is the point where Germany, France and Switzerland meet. It is a great place for a photo opportunity and somewhere you can be in three places at once.

A museum dedicated to the man who created Basel’s playful fountain. There are many works by Jean Tinguely here, along with temporary exhibitions by other artists.

Famous for its elegant riverside terrace, with tables set close to the waters of the Rhine in midsummer. The restaurant offers food made from the best of market-fresh ingredients.

Basel's best Italian restaurant - the creation of Romano Villa and Peter Wyss, whose viands are just as fine as those in southern Italy itself. This has long been a favourite of artists visiting Basel; it was a former haunt of Andy Warhol and Jean Tinguely. Ancient statuary is placed against periwinkle blue walls and chandeliers light the dark woodwork. All of this is just setting the scene for the first-class cuisine, which some critics have hailed as the finest Italian dining in the entire country.

If a city break isn't complete until you have shopping bags in your hands, then Basel is the place for you. It's easy to combine shopping with sightseeing. And there is plenty to keep you occupied: luxury brands like Hermès, Louis Vuitton or Rolex; shoes, fashion, books and specialities; from small boutiques and old antique shops to chic department stores.

Every Saturday morning, Petersplatz is overtaken by the flea market. Take some time to browse the quirky stalls and you might find some treasures.

If you are looking for boutique shops and independent stores, head for the narrow alleys of the Spalenberg. This is the perfect place for finding things that you wouldn’t get back home.

Ueli Beer is one of the most popular local beers in the city of Basel and one the best places to sample a pint or two is Brauerei Fischerstube on the Rheingasse. The beer has been brewed in the microbrewery here since 1974 and there are often festival and season tipples to try too.

This lively brew house is situated inside Basel’s former electrical substation and produces three different varieties of Volta Bräu beer. With a long bar and comfortable lounge inside and an inviting beer garden outside, this is the perfect place for a few drinks whatever the weather.

If you are looking for variety when it comes to beer, head to this establishment just outside St Johannspark. It serves 18 beers on tap and 250 different bottled options.

Universally known as "Tis" and the most popular venue in Basel, hosting live bands and dance nights.

Grungy hardcore, metal and ska acts in this café-bar venue, generally on weekends.

Focus of Kleinbasel nightlife, a café-bar with adjacent venue for live bands, DJs, readings and happenings.

Basel is the sunniest city in Switzerland and often experiences temperatures a few degrees hotter than elsewhere.

Unique City
Special Events
Discover seasonal events
Basel Christmas Market
Basel Christmas markets provide romantic breaks and festive holidays to a selection of traditional European Christmas markets.
Find out more
No items found.
Stay at Local
Maritim Hotels
Our preferred European hotel partner
No items found.
Subscribe to our Tours & Land Holidays offers
JOIN NOW
Thank you! Your submission has been received!
Oops! Something went wrong while submitting the form.
Book Your
Excursions
By clicking an excursion below, you will be taken to the website of our booking partner Viator. Viator is a TripAdvisor company and reservations made using this link will be made directly with Viator. Full terms and conditions apply.
Inspiration & Advice
Our Blogs
Find plenty of tips, advice and news stories in our weekly blog posts.
5 Places To Stay When Visiting The Black Forest
When visiting the Black Forest, you may find it easier to stay in a larger town or city and then travel to the smaller places from there. Here are a few great options.
READ MORE
5 Basel Museums You Shouldn’t Miss
With around 40 different museums to explore, there are many reasons why fans of painting, architecture, design and sculpture will enjoy a Basel city break.
READ MORE