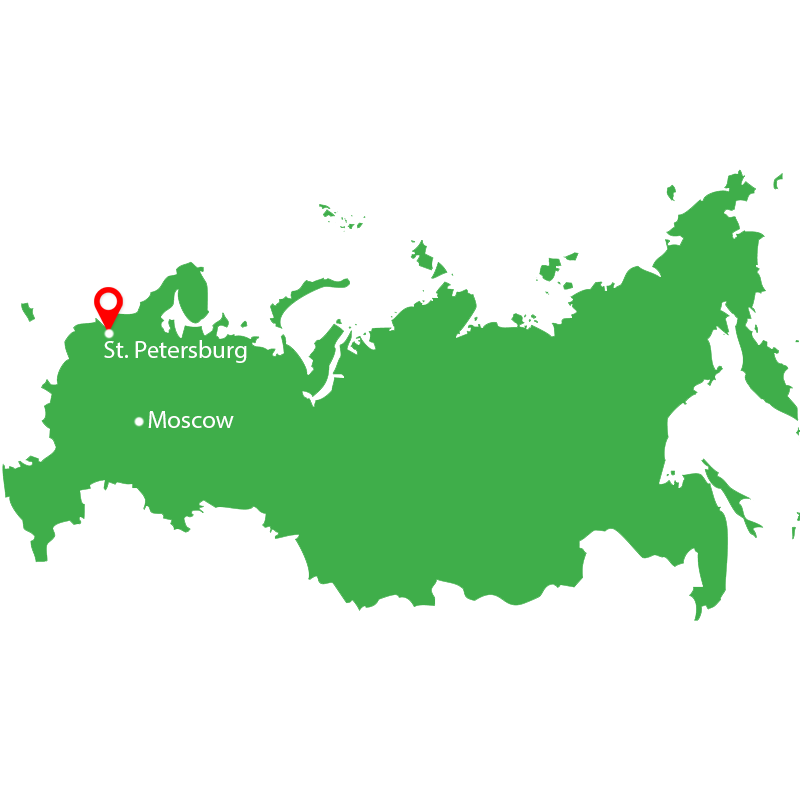 Envisaged by Peter the Great, who named this beautiful city after the apostle Saint Peter, St. Petersburg is as stately and palatial as cities come. Peter ordered it to be built to create an impressive new capital of the Russian empire in the eighteenth century, finding the most skilled architects to bring his elegant creation to life. Moscow may be Russia's modern capital but St. Petersburg stands proud as a symbol of beauty and culture that regularly has tourists swooning.

The famous Russian waterways run through the heart of the city and this, along with the many bridges that help you to navigate the various areas, adds to the charm of a city that is often referred to as the 'Venice of the north'.

Key cultural figures, such as Tchaikovsky and Dostoyevsky made St. Petersburg their home at one time and it's easy to see why they, and many others since, fell in love with the city. There is so much to see and do on your St. Petersburg city break, but you should definitely make time for visits to the Winter Palace/Hermitage museum and Kazan Cathedral.

Away from the obvious, families and those looking to cool off will enjoy a trip to Russia's biggest aqua park, Piterland, or just a quick run through the Peterhof Fountains. Alternatively, climbing the three hundred steps of the Colonnade of St Isaac's Cathedral will offer unrivalled views of this fantastic city.

One of the most famous art museums in the world, housed in the Winter Palace, and containing over 2.7 million exhibits including some of the world's greatest works of art.

This popular park still has more than 80 of the original marble statues, sculptures and houses Peter's Summer Palace, a simply designed two-story building that now displays many of the ruler's own artefacts.

The Peter and Paul Fortress

Located in the architectural and historical centre of Saint Petersburg. Its powerful stone walls rise almost out of the water, and the cathedral spire soars into the skies, creating a unique view from afar as a part of the wide Neva panorama.

One of the world's largest museums of Russian art, the collection is housed in four palaces located in the historical centre of St. Petersburg. Together, these buildings present a retrospective panorama of Russian architecture - Baroque (Stroganov Palace), early and late Neoclassicism (Marble Palace, St. Michael's Palace). The collection of the Russian Museum numbers some 400,000 works and covers the entire history of Russian fine art from the 10th century to the present day.

Cathedral of Our Lady of Kazan

This is one of the city's most impressive churches and is an outstanding example of the early 19th-century Russian architecture. The Cathedral of Our Lady of Kazan is one of the top achievements of high classical architecture and is a brilliant example of synthesis in art. Some of the best sculptors and artists decorated it: V.Shebuyev, O.Kiprensky, V.Borovikovsky, A.Ivanov, A.Yegorov and others. They also painted the iconostasis and other parts of the cathedral.

Built in 1818 by Auguste de Montferrand, St. Isaac's Cathedral is one of the world's largest. One of the most incredible aspects are the sculptures that adorn the 4 corners, they are carved angels supporting gas torches and they are an absolutely breath-taking sight at night. The interior of the church consists of an area of more than 43,000 square feet and is filled with hundreds of 19th-century works of art.

Some of St. Petersburg's restaurants continue the traditions that were started before the October Revolution of 1917; they are styled as the restaurants of the beginning of the 20th century. St. Petersburg has a surprising range of eateries in and around the city centre, where the food mainly ranges from traditional Russian to Eastern European. However, you will also find a good number of Asian and ethnic restaurants in town, along with expat pubs and lounges.

The most popular shopping street is Nevsky Prospekt with numerous boutiques, department stores and bookstores. Further east on Nevsky Prospekt, the pillared facade of the 18th-century Gostiny Dvor hides a vast labyrinthine shopping arcade, which is stocked full of stores of all descriptions, from clothes to alcohol and electronics. Immediately opposite is the 19th-century glass-roofed Passazh Arcade, with more of the same. St. Petersburg is good for souvenir shopping, with plenty of open-air markets around the main shopping districts.

St. Petersburg offers a good range of nightlife and entertainment options. Whether it is clubbing, casino, classical music or theatre, you will find something to your tastes. You can visit the ballet or opera, enjoy a play at the theatre or dance the night away at clubs, bars, music venues and dance parties. The night scene is constantly changing, so check the weekly events. The most popular nightlife spots are located between Ligovsky Prospekt, Vasilievsky Island, and the Petrograd Side.

Discover more
Did you know?
Unique City
Special Events
Discover seasonal events
No items found.
No items found.
Stay at Local
Maritim Hotels
Our preferred European hotel partner
No items found.
Subscribe to our Tours & Land Holidays offers
JOIN NOW
Thank you! Your submission has been received!
Oops! Something went wrong while submitting the form.
Book Your
Excursions
By clicking an excursion below, you will be taken to the website of our booking partner Viator. Viator is a TripAdvisor company and reservations made using this link will be made directly with Viator. Full terms and conditions apply.
Inspiration & Advice
Our Blogs
Find plenty of tips, advice and news stories in our weekly blog posts.
Architectural Highlights Of Russia’s Largest Cities
Being the largest country in the world means there’s plenty to see and do in Russia. Whether you choose to visit the country’s capital, Moscow, to see the awe-inspiring Kremlin in the flesh or visit St. Petersburg to wander around the various fascinating museums.
READ MORE