0800 035 0711
0800 988 3369
Home
/
Destinations
/
Europe
/
Spain
Travel to...
Spain
Spain has always been a beloved holiday destination for us Brits, even as the trend slowly moves away from relaxing beach resorts & towards shorter city breaks.
See Departures

The Spanish way of life is relaxed, nicely-paced and easy. High temperatures mean Spanish people work hard when conditions are right and relax when it's too hot. In summer, Spain is a hive of activity, especially after dark, when streets are filled with live music, flamenco dancing and people sharing food. Spanish people love sport, particularly golf and football. 'El Gran Clasico' played between Barcelona and Real Madrid, is one of the biggest club games and football spectacles anywhere in the world. Twice a season, Spain, and millions of people around the world come to a standstill to enjoy the beautiful game at its very best.

As well as trips to the major cities of Madrid and Barcelona, we also have holidays to Seville, a wonderful city in the Andalusia region. 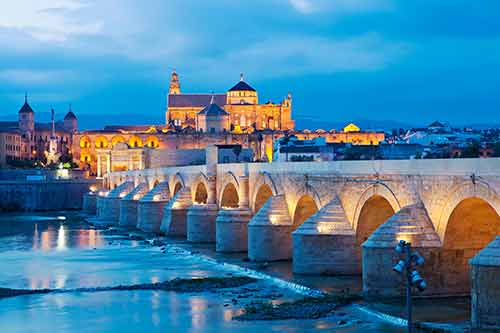 Each city and town has its own festivals and national holidays such as Christmas and Easter Week are also celebrated differently across different regions. Bullfighting, called 'Fiesta Nacional' (the national sport) and the most famous and historical place to view this is Pamplona. Spanish life is lived as much in the streets as in the home. Often before parties start, people embark on leisurely walks down local streets or beaches. Street seating is always full. It is not unusual for Spanish people to spend an evening going to several bars eating different 'Tapas' and drinking. For a faster pace, the big cities and islands, especially Ibiza are home to some of the most famous clubs in Europe and the world. Privilege, Pacha and Eden among others, offer revellers the chance to dance through the night and take in breathtaking sunrises and hedonistic atmospheres.

Eating out is a way of life, and one of the reasons bars and restaurants are awash with locals and tourists and this fusion creates an incredible atmosphere. Dishes are rustic with good sized portions. 'Tapas' is the perfect way of trying lots of different flavours and foods. Paella is a Spanish staple, containing whatever meat or seafood diner desires. Spain is a wine-loving country and its fine produce are great accompaniments to its food. Rioja, from the Logrono region, is one of Spain best. Sherry is also very popular, and Spain produces four types, from dry to sweet. Coffee (particularly strong, black) and bottled water are also both hugely popular

Around 1100 BC, Phoenicians and Greeks set up trading colonies along the Spanish coast. After the Punic Wars, the Romans ruled for six hundred years. During this time they introduced many things including Christianity and Latin. By the end of the sixth century, the Visigoths had taken hold of the majority of the Peninsula. Two centuries later, Arabian natives conquered virtually the entire country. Isabella of Castile and Ferdinand of Aragon married in 1469 and this was the springboard to a period of growth. Twenty-six years later the Canaries became part of Spanish territory. By the sixteenth century, Spain was very important in European politics and one of the most powerful countries in the world. It lost the Philippines, Cuba and Puerto Rica to the United States in 1898 which ended its overseas empire.

In 1931, Spain formed a republic after the King's advisors and friends told him it would be best to leave. Huge public crowds gathering in Madrid and large election defeats sealed his fate. After a five year republic full of fighting and uncertainty, General Franco became Head of State and Commander-in-Chief of the Armed Forces. This was the start of a forty-year dictatorship. His death in 1975 allowed the monarchy to reassume power through Juan Carlos I, who had the vision to begin the switch to a democratic state. Adolfo Suarez completed this change, and there was a democratic election on June 15th, 1977. Spain has lived through unprecedented change since then. Spain became a member of NATO in 1982 and it joined the European Union in 1995. Since then its economy has flourished.

Subscribe to our Tours & Land Holidays offers
JOIN NOW
Thank you! Your submission has been received!
Oops! Something went wrong while submitting the form.
Discover more
Did you know?
The beret, despite being synonymous with France, was actually invented by the Basques, in north-east Spain
Read Some
Related Blogs
Find plenty of tips, advice and news stories in our weekly blog posts.
Your Definite Guide To A Madrid City Break
Capital of Spain, home to one of the world’s most success football teams & overflowing with culture. Here's all you need to know when planning a trip to Madrid.
READ MORE
5 Cities Perfect For A Winter Break
It's time to embrace everything that winter brings – from crisp mornings to Christmas – and so here are some great cities to visit at this time of year.
READ MORE
Some Iberian Inspiration For 2017
If you have already started to think about your trip for summer 2017, we have a great option for you to consider in the form of our ‘Iberian Inspiration’ tour.
READ MORE
Don’t Leave Seville Without…
If you are planning a trip to the capital of Andalusia, you shouldn’t leave without doing the following activities.
READ MORE
Celebrating Christmas In Barcelona
If you’re imagining wandering through Christmas markets with beautifully delicate snowflakes tumbling down around you, then you may be a little disappointed if you choose to visit Barcelona. However, if you’re not wanting to shiver your way through the Christmas period, this Spanish city is the place to go.
READ MORE