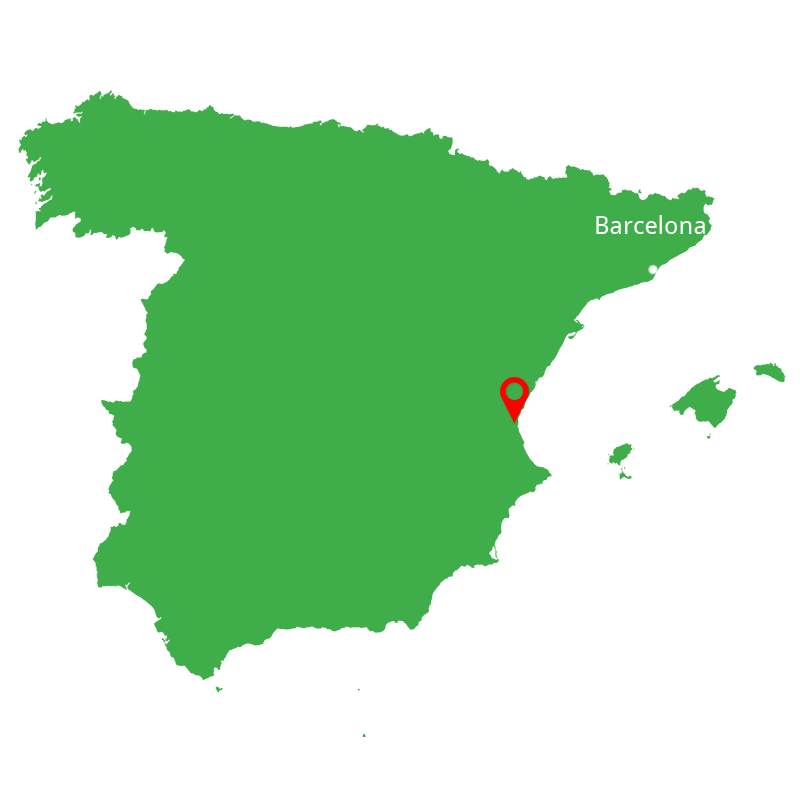 Valencia is the third biggest city in Spain, home to paella and the Holy Grail. The combination of Gothic and modern architecture makes it a visual and cultural feast. The city boasts fantastic neon-accessorised fountains, a colourful and characterful old town with gothic architecture and, at the same time, it is the centre of international and avant-garde design, with the most innovative buildings from the new millennium. The fine sand, clean water and the vastness of the sea make the Valencian coast every sun-seeking, beach-goer's dream. Valencia hosts one of Spain's greatest festivals, Las Fallas, taking place every March when revellers enjoy a week-long party with fireworks and massive bonfires every night. This energetic city is fast becoming one of the hottest tourists' spots in Spain.

The Serranos Towers are considered to be the largest Gothic city gateway in all of Europe and were constructed at the end of the 14th century as part of the city's fortification.

One of the oldest churches in Valencia built around 1261.

One of the most outstanding painting archives in Spain, containing a strong collection of Flemish and native Valencian art.

Eating out in Valencia is a taste sensation and an experience not to be missed. Its traditional recipes are prepared using natural ingredients such as oil, vegetables, spices, fruit, fresh meat or fish and has come to be known as "the Mediterranean Diet". The incredible variety of rice dishes and desserts is also outstanding. The cuisine from the region of Valencia enjoys great prestige at both a national and international level but whatever you do make sure that you try traditional Paella and Tapas. There are plenty of restaurants across the city, but the main district for dining out is concentrated in the old part of town.

The shopping possibilities in Valencia are endless; the street markets and numerous shopping centres offer the visitor a wide and varied range of products. From speciality artisan shops and hippie markets to the latest in designer fashion, Valencia is a paradise for browsers and credit card-toting shopping fiends alike.

Valencia is famous for its sparkling nightlife, full of people who are ready to have fun, feel the music and dance. The city buzzes with activity every night of the week, but the Fridays and Saturdays are of course the most crowded nights and the party seems to go on forever. The most popular area is the Barrio del Carmen, right in the old part of town, but if you're visiting the city in July and August then the centre sizzles like a sauna and there's a mass exodus to the beach areas and the Paseo. Here, there are plenty of open-air bars, which play music and often have dance floors.

Valencia is famous for its oranges, but the one variety known as the Valencia Orange is actually a hybrid created and grown in Mexico.

Unique City
Special Events
Discover seasonal events
No items found.
No items found.
Stay at Local
Maritim Hotels
Our preferred European hotel partner
No items found.
Subscribe to our Tours & Land Holidays offers
JOIN NOW
Thank you! Your submission has been received!
Oops! Something went wrong while submitting the form.
Book Your
Excursions
By clicking an excursion below, you will be taken to the website of our booking partner Viator. Viator is a TripAdvisor company and reservations made using this link will be made directly with Viator. Full terms and conditions apply.
Inspiration & Advice
Our Blogs
Find plenty of tips, advice and news stories in our weekly blog posts.
A Slice Of British Culture In The South Of Spain
Often maligned for being old fashioned, Gibraltar is experiencing a resurgence as Brits look for familiar surroundings outside of the UK.
READ MORE
Your Definite Guide To A Madrid City Break
Capital of Spain, home to one of the world’s most success football teams & overflowing with culture. Here's all you need to know when planning a trip to Madrid.
READ MORE