At roughly 6,592,800 square miles in size, Russia is the largest landmass on the planet. Its size means its population are exposed to some of the most extreme climatic conditions known to man. Russia is full of natural wonder and mystery. It also offers visitors pristine Black Sea beaches, and the chance to fish for enormous catfish on the intimidating Volga River. Travelling cross-country is most efficiently done by internal flights, but those seeking a more authentic journey can buy a ticket on the Trans-Siberian railway.

Russia is full of stately architecture and whether you take a holiday to St. Petersburg or Moscow, the history and majesty of the country are clear for all to see. 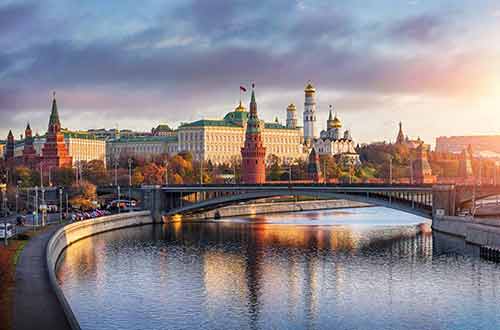 The family unit is very important in Russia, as is its heritage. Christianity is the country's most practised religion, and although many languages are spoken, Russian is the most widely used. Its cultural centres are Moscow and St, Petersburg, where football and ice hockey teams are fanatically followed. Russia's natural resources have been the envy of the world for hundreds of years, and engineering has historically been at the core of its workforce and economic output.

Unsurprisingly, its vast population, religious and cultural diversity have resulted in Russian cuisine offering an array of ideas, ingredients, methods and dishes. The harsh weather has a huge impact on the way meat is eaten, cooked and preserved. Varieties of chicken, beef and vegetable soups are home-made all year round. Providing warmth and nutrition, they have been a staple for many hundreds of years. Main courses are simple but delicious. Beef Stroganov and Pelemy are among many traditional dishes the country has to offer. Russia is world-famous for vodka. Beer is also rapidly increasing in popularity, and now Russia is one of the world's largest producers. Traditional non-alcoholic drinks include Kvass, while tea is also becoming an increasingly large part of Russian culture.

Even as far back as the fifth century, Slavs were pouring into Russia. Its first state was founded four hundred years later. Today it is known as Ukraine, and back in the ninth century, it was founded by Scandinavians. It was not until the early sixteen hundreds, after centuries of Turkish rule, that there was a marked expansion of the Russian Empire. It then took a further three centuries to reach its peak. Civil war divided the country and the start of the 1920s, but its end marked the start of further expansion, and the USSR was formed. This was followed a period of industrialisation that continued until the Second World War. Following the cold war and changes brought about under the leadership of Mikhail Gorbachev, the soviet state disbanded in 1991. As Russia moves towards 2012, it still has no plans to join NATO or the European Union.

Subscribe to our Tours & Land Holidays offers
JOIN NOW
Thank you! Your submission has been received!
Oops! Something went wrong while submitting the form.
Discover more
Did you know?
Read Some
Related Blogs
Find plenty of tips, advice and news stories in our weekly blog posts.
8 Creepy Characters From European Folklore
With Halloween on the horizon, we have gathered some of the best creepy creatures from myths, legends and folklore around Europe.
READ MORE
Architectural Highlights Of Russia’s Largest Cities
Being the largest country in the world means there’s plenty to see and do in Russia. Whether you choose to visit the country’s capital, Moscow, to see the awe-inspiring Kremlin in the flesh or visit St. Petersburg to wander around the various fascinating museums.
READ MORE