Luxembourg is a constitutional monarchy neighbouring Belgium, France, and Germany. Covering less than 1,000 square miles, Luxembourg is home to nearly 450,000 residents, with about a fifth of these individuals residing in or near Luxembourg City.

The capital, Luxembourg-Ville, is split into two districts: the delightful old centre (a UNESCO World Heritage Site), complete with fortress towers, turrets and winding, cobblestone streets; and the modern downtown area on the Plâteau du Kirchberg, home to Luxembourg's renowned international finance businesses. Proud of its role as a founding member of the EU, Luxembourg sees itself as playing a prominent position in European affairs and there are a number of European Union institutions based in Luxembourg-Ville.

With a moderate climate, Luxembourg is a great destination any time of year. However, be prepared for a bit of rain. Traditionally, "in-season" has been defined as any time from mid-April to mid-October. Peak season is July and August. Wine connoisseurs would do well to experience the full-bodied flavour of the Grevenmacher Wine and Grape Festival in mid-September.

Luxembourg has historically experienced commercial prosperity as well as regular military incursions and occupations. Luxembourg owes its continued existence to a mixture of good fortune and good diplomacy, which have prevented it from being permanently absorbed into the territories of its larger neighbours. By the time that Luxembourg's independence was finally confirmed in 1867, however, the Grand Duchy was left with such a tiny territory that its people had to look across its borders for economic survival. This has resulted in a cosmopolitan attitude, which has survived to the present day and is exemplified not only by the fact that the country has the highest percentage of foreigners of any EU country, but also by the trilingual ability of its people.

Luxembourg cooking combines German heartiness with Franco-Belgian finesse. The preparation of trout, pike and crayfish is excellent, as are the pastries and cakes. Delicious desserts are prepared with local liqueurs, and a dash of quetsch, Mirabelle or kirsch is added to babas or fruit cups. Most aspects of restaurants and bars are similar to the rest of Europe. Luxembourg's white Moselle wines resemble those of the Rhine but are drier than the fruitier wines of the French Moselle. Beer is another speciality and is a traditional industry. 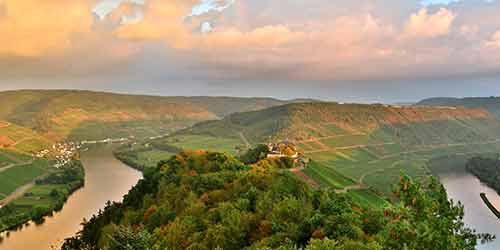 Discover...
Luxembourg
Luxembourg
Highlights
Subscribe to our Tours & Land Holidays offers
JOIN NOW
Thank you! Your submission has been received!
Oops! Something went wrong while submitting the form.
Discover more
Did you know?
Read Some
Related Blogs
Find plenty of tips, advice and news stories in our weekly blog posts.
3 Alternatives To…A Paris City Break
Sometimes the obvious choice is too expensive, too crowded or just, well, too obvious. So, here’s why Bordeaux, Riga and Ljubljana are all great alternatives to a Paris city break and all its charms.
READ MORE