Slovakia is one of Europe's youngest nations and is a tiny territory that sits right at the heart of Europe. Completely landlocked by the larger, more powerful countries that surround it, for centuries Slovakia was subject to the whims of invaders and foreign influences. However, despite being treated poorly by their neighbours the Slavik people continue to extend a warm welcome to foreign visitors. Since independence was gained in 1993, tourists have found themselves drawn to the charms of this isolated and beautiful nation, with its untamed expanse of mountains and forested valleys, interspersed with a rocky karst landscape. Clamber through 300m deep gorges and sit on peaks looking down on lush green valleys, all within a couple of miles of each other.

The North's High Tatras mountains are perfect for climbers and hikers, and in winter the skiers take to the slopes for some of Europe's freshest on and off-piste thrills. Explore the central regions and the east and you'll discover a land of castles and chateaux surrounded by forests that are home to wolves and one of Europe's last bear populations.

Bratislava city breaks are very popular amongst those looking for a more alternative trip within Europe. With inexpensive prices and plenty to see and do, tourism in the city is definitely on the rise. 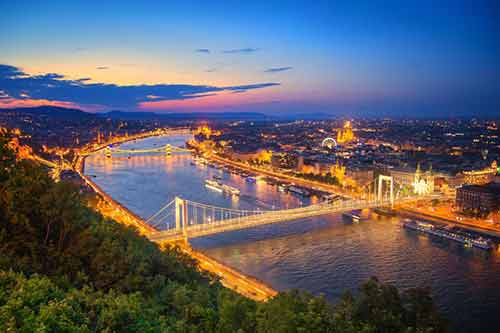 Slovakia is a cultural melting point situated at the geographic heart of Europe. Both In its history both the Hungarians and the Czechs have invaded and Slovakia has absorbed characteristics of these countries and adapting the less dramatic influences of the West through trade and tourism. Slovaks today, as they always have been, are a patriotic and peaceable people used to the practices of almost every other culture in Europe. Because of this visitors find them the perfect hosts - they are prepared to devote time to show off their beautiful unspoiled country to anyone who cares to visit.

Slovakian cuisine is based on simple fare, with the dominant flavours typically Eastern European, salty or seasoned with the strongly flavoured caraway seed or simple herbs.

A typical meal will consist of meat and a couple of boiled vegetables, sometimes all cooked together as a hearty stew or goulash, or served separately as a steak or joint accompanied with a thick sauce.

Vegetarians need to be extra careful around Slovakian cuisine and vegans will find suitable dishes extremely hard to find. Fried food such as omelettes are commonly fried in animal fat, and it isn't unheard of for foods proclaiming to be meat-free to contain ham!

Subscribe to our Tours & Land Holidays offers
JOIN NOW
Thank you! Your submission has been received!
Oops! Something went wrong while submitting the form.
Discover more
Did you know?
Read Some
Related Blogs
Find plenty of tips, advice and news stories in our weekly blog posts.
3 Things To Do In The Port Of…Bratislava
Whilst on a Danube river cruise, you may find yourself in the port of Bratislava. Here are just three of the many things you can do to make the most of your visit.
READ MORE