'Ischa Freimaak' (it is Freimarkt) is what the Bremen inhabitants say when what is known as their 'fifth season' starts in autumn. With beer being brewed in the city since the 11th century, The Bremen Beer Festival is the oldest fair in Germany and the biggest festival in the north of the country. The quality of local beers such as Rotbier, Porter and Ale can be appreciated throughout the festival. The Freimarkt is famous for its late-night partying and its state-of-the-art fairground rides. There is no other fair in Germany that offers such a wide range of fun rides like the riverside city. Thrill-seekers will be delighted and partygoers will find a wide range of lively locations.

Thousands of visitors from all over the world sway in the beer tent, listen to rock and pop music in the Hanseatic tent or meet after 8pm in hall 7 to take part in Bremen's largest party.

The Bremen Freimarkt may not be as popular as Munich's Oktoberfest but there is certainly no shortage of fun to be had. The two-week fair and folk festival is considered one of Germany's finest beer festivals and one of the country's most historical events.

If you are looking for a calmer experience, don't miss a visit to the Bremen marketplace in the historic city centre. Here, you can enjoy the delicious fried pastries, the famous aromatic gingerbread hearts or the bright red toffee apples. You can also take advantage of the world famous Becks headquarters in Bremen and take a brewery tour. As well as looking around the museum, you will be able to see the ingredients store and brew-house, malt silos, fermentation tanks and be provided with a wealth of fascinating information about brewing the world famous Beck's branded beer.

A tour of the brewery can also be easily combined with a visit to Alexander von Humboldt, the iconic three-masted ship used to promote Beck's beer. Once a star of German TV and adverts, the ship now serves as a floating hotel and restaurant, offering overnight accommodation in its modern double and four-bed cabins.

'Ischa Freimaak' and Bremen itself provide a unique setting for events and is a wonderful place to relax and get together with friends. To plan your trip to Bremen Beer Festival, request a quote via our contact form.

If you can't make it during the beer festival, why not visit the spectacular Bremen Christmas Market instead? 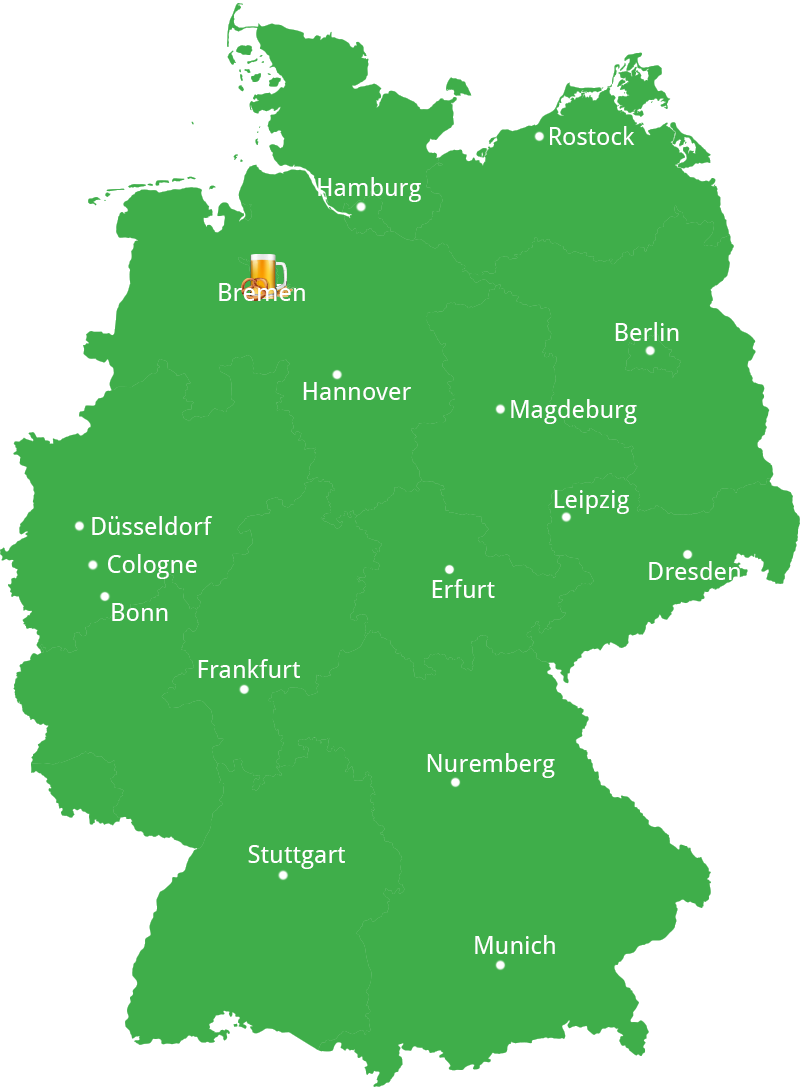 Visit Other
Nearby Festivals
Hanover Beer Festival
July brings with it the start of the world's biggest shooting festival in Hanover, which happens to include its fair share of beer as well. Book today!
Find out more
Hamburg Spring Beer Festival
The DOM is a part of Hamburg's tradition and guarantees adventure, fun, excitement and nostalgia. Book a trip to the city during this time with Fred.\
Find out more
Hamburg Summer Beer Festival
The Hamburg Summer Beer Festival offers visitors the chance to attend one of the largest fun fairs in Germany. Book your trip with Fred.\ holidays, today!
Find out more
Hamburg Winter Beer Festival
This Beer festival comes alive at winter and consists of live festive music, thrilling rides at the fun fair and attractions for all the family. Book today!
Find out more
Stay at Local
Maritim Hotels
Our preferred European hotel partner
Bremen
Subscribe to our Tours & Land Holidays offers
JOIN NOW
Thank you! Your submission has been received!
Oops! Something went wrong while submitting the form.
Read Some
Related Blogs
Find plenty of tips, advice and news stories in our weekly blog posts.
The Complete Guide To Oktoberfest
Although there are plenty of others to discover throughout Germany, Oktoberfest is still the country’s premier beer festival. Here is everything you need to know to enjoy this bucket list beer experience.
READ MORE
Everything You Need To Know About The Best German Beer Festivals
Beer festivals take place all over Germany throughout the entire year. Here is everything you need to know about some of the best events the country can offer.
READ MORE
5 Things That You’ll Find At Munich’s Starkbierfest
Munich's Starkbierfest is held in February and March and is the perfect alternative to Oktoberfest.
READ MORE
Three Cheers For A Festival Of Beers
There are plenty more european beer festivals besides Oktoberfest and so why not consider one of these excellent options.
READ MORE