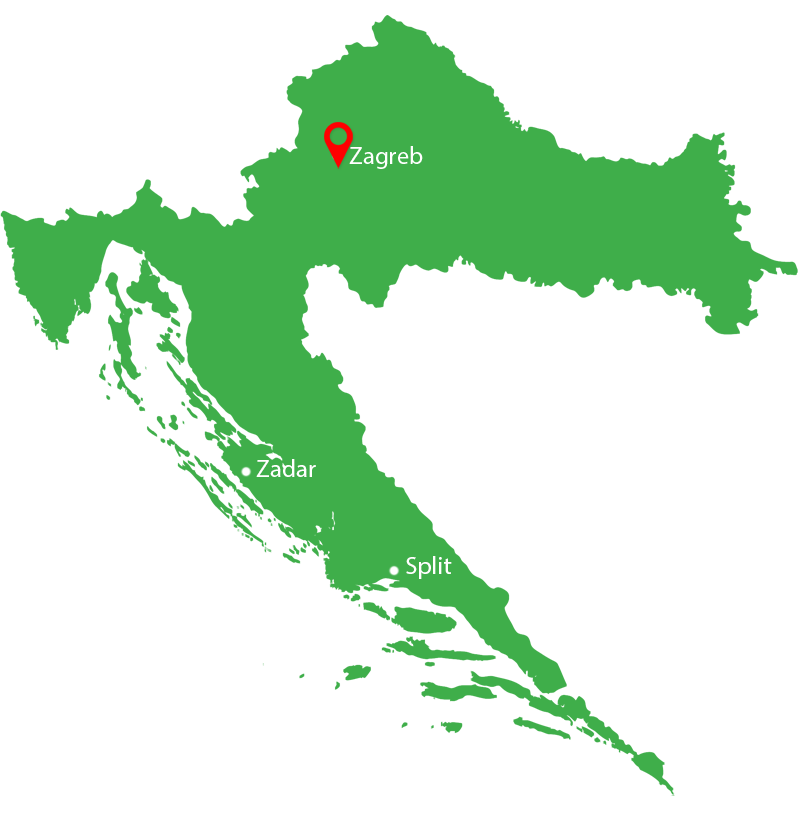 Welcome to Zagreb, the capital city of the Republic of Croatia. Zagreb is an old Central European city. For centuries, it has been a focal point of culture and science, and now also of commerce and industry. It lies at the intersection of important routes between the Adriatic coast and Central Europe.

When the Croatian people achieved their independence in 1991, Zagreb became a capital - a political and administrative centre for the new republic. Zagreb can offer its visitors the Baroque atmosphere of the Upper Town, picturesque open-air markets, diverse shopping facilities, an abundant selection of crafts and a choice of cuisine. It is a city of green parks and walks, with many places to visit in the beautiful surroundings. In spite of the rapid development of the economy and transportation, the city has retained its charm and a relaxed feeling that makes it a genuine and welcoming place.

There is a large amount to do in Zagreb as it is really two cities in one. There's the Lower Town, full of wide boulevards, huge squares and Secession architecture, and the Upper Town which is cosy, intimate and distinctly medieval in style.

The boundary between the Upper and Lower towns is Trg Jelacica (pronounced yell-atch-itsa), Zagreb's central square and meeting place. You'll wind up there sooner or later as all roads and trams seem to lead there. It is dominated by a statue of Croat hero Josip Jelacic in the centre.

The Mirogoj Cemetery is considered to be one of the most beautiful cemetery parks in Europe and, because of its design, numbers among the more noteworthy landmarks in the City of Zagreb.

Cathedral of the Assumption of the Virgin Mary

The 105m (345-ft.) twin spires of this magnificent Gothic structure seem perpetually covered with scaffolding, and its entrance is hidden behind a tarp. But despite the dust and mess, the grace and beauty of this Herman Bollé masterpiece shine as a symbol of Zagreb.

Dolac is north of Trg Jelacic and starts every day around 5am, vendors load their stalls with piles of colourful fruits, vegetables, baskets, and other Croatian products.

Situated in the Old Town, this square is home to the beautiful St. Mark's Church and a number of Zagreb's government buildings. The church roof is tiled with the city's coat of arms.

The name refers to a series of squares that are organised into a 'u' shape. This was done by Milan Lenuzzi in the 19th century and features many of Zagreb's cultural institutions and public parks.

This means of travel between the lower and upper parts of town is the shortest funicular ride in the world at 64 seconds. It has also been used since the days before horse drawn carriages.

One of the locals' favourite green spaces, the park is modelled on a traditional English garden and is home to the city's zoo.

This is the name given to a strip of pedestrianised street between Ban Jelačić Square and Petar Preradović Square. It is home to a wide array of coffee houses which play a big part in the local culture.

This impressive tower is part of the city's medieval fortifications and houses the Grič Cannon, which is fired every day at noon.

This nature park is home to Mount Medvednica and is the perfect place for a weekend stroll away from the city.

This chef looks south towards the coast for inspiration. In a bright airy room, the fish and seafood are outstanding. In summer, you can eat outside on the leafy terrace.

It's big and sometimes touristy, but this traditional place across from the cathedral does Zagreb dishes the way they should be done. Plus, the service is friendly and it's open on Sunday.

If you want to dine with locals, head to Boban. This Italian restaurant serves up daily specials alongside the usual suspects in an old brick cellar.

This popular beer hall is known for its hearty dishes like sausages and beans and its own-brand brews served at heavy wooden tables.

This sweet or savoury delight consists of a thin dough stuffed with cottage cheese. there are many different versions to try.

This is a type of flatbread which is often torn into strips and coved in boiling water to give it a pasta-like consistency. It is traditionally served with turkey.

This dish is similar to schnitzel from Vienna. The meat is stuffed with ham and cheese, coated with breadcrumbs and then fried.

There are a lot of shopping centres, specialised shops and boutiques in Zagreb, and in the past few years several modern, attractive shopping centres like the Importanne centre, Importanne Gallery, Kaptol centre, Branimir centre have opened. Beside numerous shops, those centres offer other facilities like restaurants, cinemas, etc.

Zagreb is without a doubt Croatia's party city and in recent years has come to the attention of 'in the know' western travellers, searching for a cultural city break that has both exceptional beauty and an amazing nightlife.

The city is definitely one of the trendiest places to visit in Europe; the people are stunning, clubbing is diverse and the nightlife is less pretentious than many other cities.

Hemingway Lounge Bar - Trg marsala Tita 1: Hemingway lounge bar manages to maintain the unique feel of the original bar with highly skilled barmen on hand to make sure you get your daily dose of cocktails in the most entertaining way possible. Hemingway has developed a cult following and is among Zagreb's most popular night time hotspots for young and old alike. Dress smart & look smart.

This tunnel was created during WWII and has recently been renovated and opened to the public. There are many more tunnels to discover too, creating a hidden city under Zagreb.

In 2004, artist Davor Preis used the 'Grounded Sun' sculpture by Ivan Kožarić in the city centre to create a new art installation. He placed scale models of all nine planets (including Pluto - a planet at the time) around Zagreb at distances which represent how far they are from the sun in real life. It's fun to try and find all of them.

This residential area has become a focal point for the new wave of street art that is sweeping through the city.

Zagreb is home to the shortest funicular in the world. The journey lasts just 64 seconds and travels between the Upper and Lower towns.

Unique City
Special Events
Discover seasonal events
No items found.
No items found.
Stay at Local
Maritim Hotels
Our preferred European hotel partner
No items found.
Subscribe to our Tours & Land Holidays offers
JOIN NOW
Thank you! Your submission has been received!
Oops! Something went wrong while submitting the form.
Book Your
Excursions
By clicking an excursion below, you will be taken to the website of our booking partner Viator. Viator is a TripAdvisor company and reservations made using this link will be made directly with Viator. Full terms and conditions apply.
Inspiration & Advice
Our Blogs
Find plenty of tips, advice and news stories in our weekly blog posts.
Five Must-Visit Museums In Zagreb
Zagreb is known for its large number of museums, with some even saying it has the most per capita in the world. So, if you are visiting and you love museums, check out some of the attractions from our list.
READ MORE
5 Dishes To Try When Travelling To…Croatia
Featuring plenty of seafood and influenced by Italian cuisine, here are a few things to try when you are in Croatia.
READ MORE
4 Key Areas Of Croatia Worth Exploring
With great weather, great food and some intriguing history, there are many reasons why Croatia should be on your travel list.
READ MORE