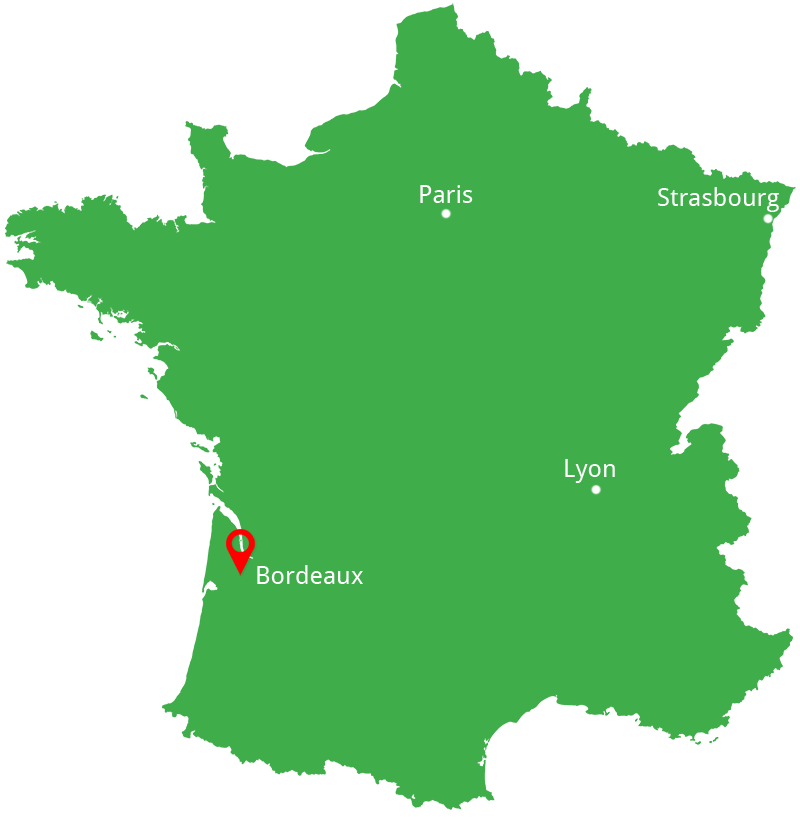 Situated on the Garonne River, Bordeaux is a city that is famous for wine but, in reality, offers so much more. The historical part is listed as a UNESCO World Heritage Site and showcases the rich history of the region. A great way to see the city in all its glory is from the top of Pey-Berland Tower - the climb of 299 steps is well worth the effort. The Place de la Bourse is an ideal area in which to enjoy the river and the many architectural delights, whilst Old Bordeaux offers sculptured facades, markets, quaint shops and, of course, cafes offering Bordeaux's finest wines.

For a more detailed look at the city, read our definitive guide to a Bordeaux city break.

If you are keen to discover more of France, we can also help you arrange Paris city breaks and hotels in Nice.

This 18th century square and palace has symbolised Bordeaux around the world for centuries and is one of the cities most recognisable landmarks.

Located in the heart of the city, near the town hall, Bordeaux Cathedral is one of the most beautiful religious monuments in the city. With a freestanding bell tower, original building dating back to 1096 and a restored royal entrance which epitomises 13th Gothic architecture, there is plenty to see.

Visit the first stone bridge to ever be built in Bordeaux, commissioned by Napoleon himself.

The Musée d’Aquitaine is one of the largest French history museums outside of Paris. Aside from the vast range of sculptures, artifacts and documents, one of the main attractions of the museum in the tomb of Bordeaux's most famous writer, Michel de Montaigne.

Dating back the 15th century, this stunning gothic bell tower offers a unique view over the city of Bordeaux. There are over 229 up to the top, so bring your walking shoes, but the scene below is well worth the trek.

Take a wine tour of the region and discover the vineyards containing some of the world's most famous names. Wine tours are available through the local tourist office and include the Sauternes, Graves, Saint Emillon and Medoc vineyards.

Located close the Musee d'Aquitaine, this popular restaurant enjoys a relaxed and elegant atmosphere, with modern art covering the walls. The menu is a masterclass in contemporary cooking, with dishes such as green tea and smoked goat cheese ravioli.

Not content with being a top notch restaurant, Le Flacon is also one of the best wine bars in the city. Enjoy an ever changing menu with serves the best of local cuisine, as well as the best wines the region has to offer.

Visit one of the most popular restaurants in Bordeaux. Run by a quartet of chefs from across the world (Israel, Japan, Vietnam and New Caledonia), the food here is diverse and exciting, with all local and seasonal produce on the menu.

For a spot of shopping to suit all budgets, go to the Rue Saint Catherine - the biggest shopping street in Europe.

Unique City
Special Events
Discover seasonal events
No items found.
No items found.
Stay at Local
Maritim Hotels
Our preferred European hotel partner
No items found.
Subscribe to our Tours & Land Holidays offers
JOIN NOW
Thank you! Your submission has been received!
Oops! Something went wrong while submitting the form.
Book Your
Excursions
By clicking an excursion below, you will be taken to the website of our booking partner Viator. Viator is a TripAdvisor company and reservations made using this link will be made directly with Viator. Full terms and conditions apply.
Inspiration & Advice
Our Blogs
Find plenty of tips, advice and news stories in our weekly blog posts.
France’s Most Impressive Buildings Away From Paris
Part of the allure of Paris is the wealth of beautiful architecture that can be found on the streets, but France has plenty of striking buildings away from the capital.
READ MORE
5 Dishes To Try When Travelling To…France
There is no better place to sample French classics than in their home country and there are also plenty of gastronomic delights that are less well-known.
READ MORE
3 Alternatives To…A Paris City Break
Sometimes the obvious choice is too expensive, too crowded or just, well, too obvious. So, here’s why Bordeaux, Riga and Ljubljana are all great alternatives to a Paris city break and all its charms.
READ MORE