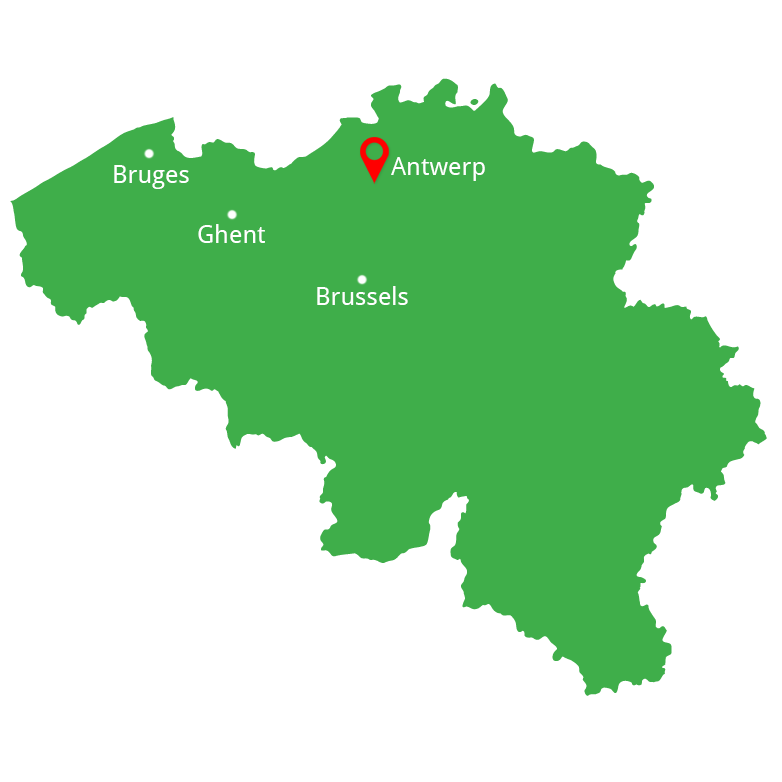 Though famed for its diamond and shipping trades above all else, Antwerp has a lot more to offer than just gems and docks. Countless museums, cultural attractions and one of the most vibrant clubbing scenes in Europe are some of its alternative attractions. Perhaps Antwerp's most obvious appeal, though, lies in the beauty of the historic city centre. Its streets are lined with traditional Flemish buildings housing cosy cafés and restaurants.

If you are keen to discover other parts of Belgium, we can also help you arrange trips such as Bruges city breaks or hotels in Brussels.

This was Peter Paul Rubens's home and studio for a large part of his life. It's a palazzo-style house that's a far cry from the bare garret you might expect of an artist's abode. The painter himself oversaw the design of the grandiose building, which consists of 16th and 17th-century sections and is adorned with statues and beautifully decorated interiors as well as a collection of Rubens's own paintings and drawings.

The rooms are meticulously furnished with antiques of the period, though few of the actual items belonging to Rubens remain, with the notable exception of the chair that he used as dean of his guild. What you will see is a tiny four-poster bed, designed to conform to the fashion of the period, which was to sleep semi-reclined. The room where Rubens died in 1640 is now furnished as a dining room, affording beautiful views over the formal garden below. Without doubt, the most ostentatious room in the house is the painter's personal art gallery with a semi-circular adjunct topped by a cupola based on the Roman Pantheon and adorned with a series of statues.

Overlooked by the cathedral and home to the 16th-century town hall, the Grote Markt is surrounded by pretty Flemish houses and is at the heart of the old town - both physically and spiritually. In summer, the square is packed with people sitting at café tables and, in winter, an ice-rink is erected here under an enormous Christmas tree. Festive stalls spill out from neighbouring Groenplaats, selling mulled wine and Christmas knick-knacks.

The streets emanating from Grote Markt are lined with restaurants and bars, which, though touristy, are nonetheless popular with locals and on the whole very cosy and atmospheric. In the centre of the square is a statue of traditional local hero Brabo holding a severed hand, illustrating the alleged origin of the name Antwerp, meaning "hand throw". According to legend, boatmen entering Antwerp via the river used to have their hands cut off if they didn't pay the port tax. Disgusted at this practice, Brabo cut off the hand of the perpetrator.

Antwerp is literally jam-packed with restaurants serving Belgian and international cuisine, though the majority of fare on offer is best described as European fusion. Many menus are fairly meat/fish-heavy and, though there are vegetarian options available in some restaurants, veggies might struggle in certain areas. Almost without exception, though, the food is of a high standard and the service is friendly and polite.

Shopping in Antwerp is paradise on earth if you're after designer clothing, with all the big names available, as well as numerous smaller designers who've set up shop in Belgium's fashion capital. For the even-better-heeled, Antwerp is, needless to say, one of the best places in the world to buy diamonds - and you'll find no shortage of places where you can part with large amounts of money if you desire.

The city has its fair share of international chain stores as well as some quirky shops filled with antiques and collectables, making it a great place for shoppers of all tastes and budgets.

Before you travel, it's worth bearing in mind when the public holidays occurs as this may affect opening times.

Antwerp nightlife has really taken off in the last few years and the city has earned itself a reputation for having a vibrant clubbing scene. There are two main areas where the majority of the best clubs are situated: Zuid, home to many of the city's trendier bars, and the old dock area, just north of the centre (which is also the red light district).

A fountain in the middle of the Grote Market is inspired by one story of how Antwerp got its name. The legend says that a brave hero chopped off a giant's hand and threw it in the river. The word Antwerpen is said to mean 'to throw a hand'.

Unique City
Special Events
Discover seasonal events
Antwerp Christmas Market
Antwerp Christmas markets offer relaxing festive breaks and family holidays to traditional European Christmas markets.
Find out more
Antwerp Beer Festival
The Modeste Beer Festival pays tribute to Modeste Van den Bogaret, who led the De Koninck brewery for over 50 years
Find out more
Stay at Local
Maritim Hotels
Our preferred European hotel partner
No items found.
Subscribe to our Tours & Land Holidays offers
JOIN NOW
Thank you! Your submission has been received!
Oops! Something went wrong while submitting the form.
Book Your
Excursions
By clicking an excursion below, you will be taken to the website of our booking partner Viator. Viator is a TripAdvisor company and reservations made using this link will be made directly with Viator. Full terms and conditions apply.
Inspiration & Advice
Our Blogs
Find plenty of tips, advice and news stories in our weekly blog posts.
5 Dishes To Try When Visiting…Belgium
Chocolate is all well and good but it would be ill-advised to eat them for breakfast, lunch and dinner. So, here are a few dishes to look out for next time you find yourself in Brussels, Bruges or Ghent.
READ MORE
Unique Ways To Enjoy Belgian Beer
Here are a couple of unique ways discover the best beer Belgium has to offer.
READ MORE
A Belgian City For Every Kind Of Traveller
Belgium attracts beer and chocolate lovers by the thousand every year, but there is much more to the towns and cities of Flanders and Wallonia than these culinary staples.
READ MORE
5 Belgian Treats To Enjoy At Christmas Markets
From chocolatey delights to alcoholic tipples, here are some of the best food to enjoy at a Belgian Christmas market.
READ MORE