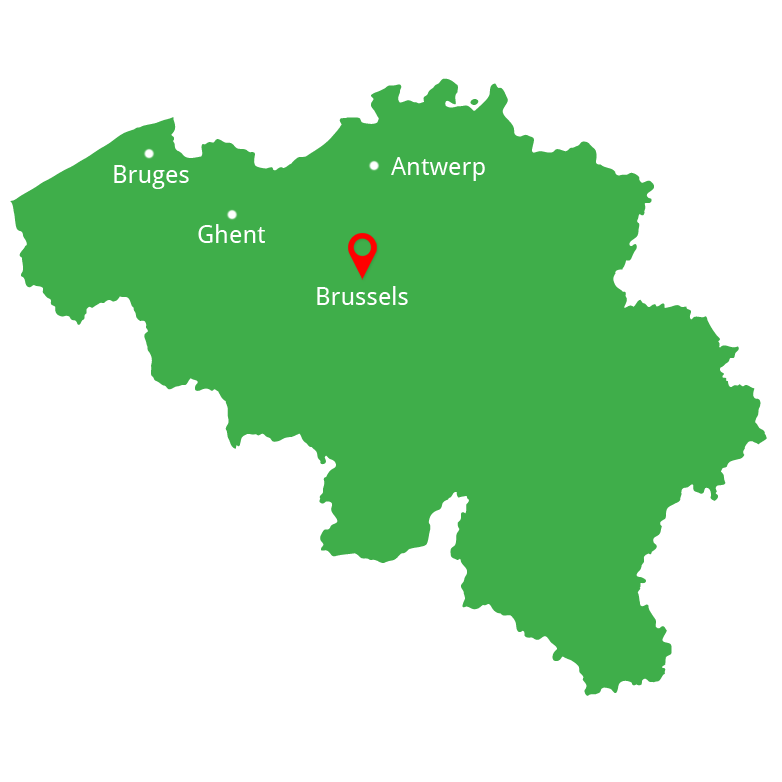 Brussels city breaks are popular with those looking to visit the many museums, stylish bars and cafes lacing the location's many cobblestone streets. Famous for its vast selection of chocolates and beers, Brussels is fast becoming a busy hotspot for musical entertainment and theatre, appealing to music lovers and those looking to take in the city's architectural marvels.

The architecture descends along the Léopold II's Parisian-style boulevards (Belliard and La Loi) with many grand and governmental buildings draw tourists along. Sainte Cathérine, the Art Nouveau district of St-Gilles and Ixelles attracts art enthusiasts and visitors from the world over. If you visit during the winter months, make sure you spend some time at the Brussels Christmas Market where the charming streets and squares are transformed into a winter wonderland.

The Grand Place is the heart of Brussels and has been since the Middle Ages. One of Europe's more beautiful squares, it lies in the centre of small cobbled streets and is surrounded by richly decorated 17th century Baroque Guildhouses.‍

Brussels Town Hall is rated as one of the most splendid civic buildings in Europe. The foundations were laid in 1402 and it survived the bombing during World War 2 when most of the other buildings on the Grand Place were destroyed.‍

Europe's very first shopping arcade opened in 1847. The building itself is an architectural masterpiece where arcaded shop fronts are situated across two floors and separated by pilasters. Between the various shops, you will find cafés, restaurants and theatres.‍

An unmissable attraction for art lovers, the twin Museum of Ancient Art and the Museum of Modern Art are Brussels's premier art museums. They feature art from the 15th to 18th centuries (ancient) and 19th century to the present day (modern).‍

The famous bronze sculpture of a boy peeing in a fountain is thought to represent the 'irreverent spirit' of Brussels.

This family-owned establishment is an excellent place for your introduction to Belgian cooking, since it combines traditional cuisine with great quality, and offers just about every regional speciality you can think of.‍

Located in the city's most elegant shopping gallery, this stylish brasserie offers a wide variety of seafood.‍

Many locals and tourists meet at the long wooden tables in a 17th-century, brick-arched cellar. It's a great place to try local specialities.

Designer shops and boutiques can be found in the Avenue Louise and Boulevard de Waterloo area, Place Stephanie, Place du Grand Sablon and on Rue Antoine Dansaert. Speciality shops are at Rue Haute and Rue Blaes.

The main pedestrian shopping street, the longest one in Brussels, is the Rue Neuve. This street has mainly international chain stores. More original smaller shops can be found between the Grand Place and the Rue Lemonnier.

Chocolate: Belgian chocolate is one of the most famous Belgian quality products. Brussels has a good selection of luxurious chocolate shops:

The city's oldest cafe, located in a 1690 building, spreads over several areas. There is an outdoor terrace and a room preserving a 17th-century Flemish interior, which is a masterpiece of wooden architecture. The fourth-floor view of the Grand-Place is truly spectacular.‍

This Brussels favourite is a bistro of great character whose name translates as 'Sudden Death', which is also the name of one of the beers you can buy here. The decor consists of stained-glass motifs, old photographs, paintings, prints on the walls and plain wooden chairs and tables on the floor. Specialities are traditional Brussels beers.‍

This relaxed bar has a good atmosphere and offers jazz and other live music most nights of the week. There's also a jam session on Wednesdays.

Brussels International Airport is the largest place in the world to sell chocolate. Perfect for picking up a souvenir before you head home.

Unique City
Special Events
Discover seasonal events
Brussels Christmas Market
Brussels Christmas markets provide festive breaks and couples holidays to a selection of European Christmas markets.
Find out more
Brussels Beer Festival
Widely regarded as one of the most exciting beer festivals in Europe, the Belgian Beer Weekend celebrates the Belgian and Brussels beer tradition in style.
Find out more
Stay at Local
Maritim Hotels
Our preferred European hotel partner
No items found.
Subscribe to our Tours & Land Holidays offers
JOIN NOW
Thank you! Your submission has been received!
Oops! Something went wrong while submitting the form.
Book Your
Excursions
By clicking an excursion below, you will be taken to the website of our booking partner Viator. Viator is a TripAdvisor company and reservations made using this link will be made directly with Viator. Full terms and conditions apply.
Inspiration & Advice
Our Blogs
Find plenty of tips, advice and news stories in our weekly blog posts.
5 Dishes To Try When Visiting…Belgium
Chocolate is all well and good but it would be ill-advised to eat them for breakfast, lunch and dinner. So, here are a few dishes to look out for next time you find yourself in Brussels, Bruges or Ghent.
READ MORE
A Belgian City For Every Kind Of Traveller
Belgium attracts beer and chocolate lovers by the thousand every year, but there is much more to the towns and cities of Flanders and Wallonia than these culinary staples.
READ MORE
These European Statues Bring Good Fortune To All Who Touch Them
All over Europe, there are statues with parts of their bodies that have been polished clean by tourists in a bid to glean some fortune in their favour. Here are some great examples that you should look out for on your travels.
READ MORE
The Dos And Don’ts Of Visiting The Grand Place
Brussels is home to the Grand Place, a picturesque square surrounded by beautiful buildings, showcasing 17th-century architecture. This is one of the most famous places in the city so millions of tourists are drawn to it each year.
READ MORE