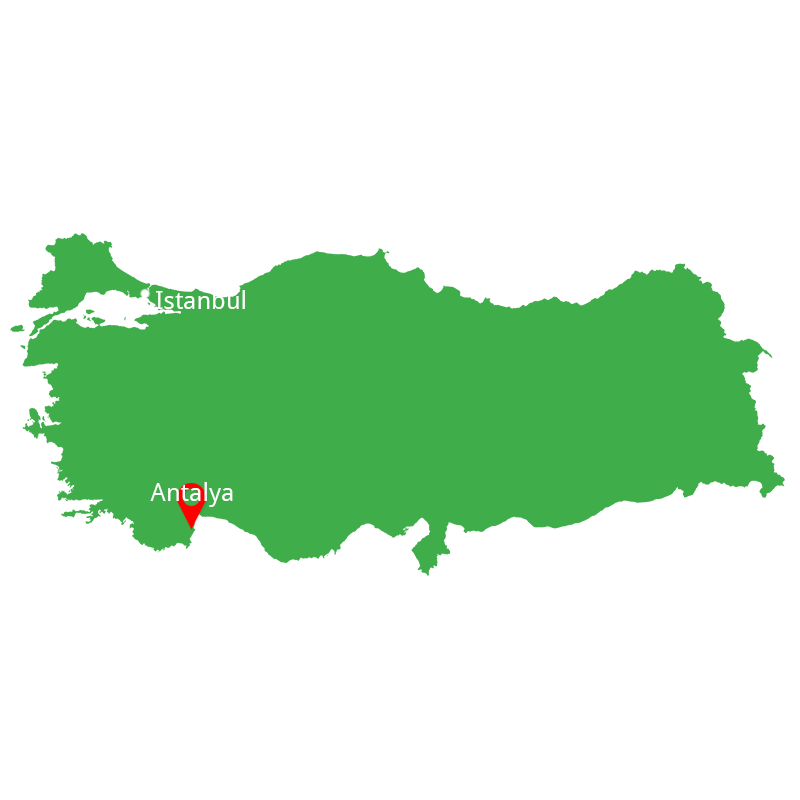 You will find the town of Antalya on the Turkish Riviera, in the south of the country, on the Mediterranean coast. Not only does this destination offer excellent beaches, which provide the perfect location for a relaxed day of sunbathing or paddling in the sea, it also offers excellent links to many other Turkish towns and cities. This allows you to explore more of this part of the world at your leisure.

This part of Turkey offers the chance to experience many different types of holiday, including opportunities to take it easy on the beaches, trek into the nearby Taurus Mountains or explore ancient sights such as Aspendos, Side, Perge and Phaselis which can all be found in close proximity to the popular resorts.

The town itself is perched on a cliff and is surrounded by beautiful mountainous scenery. The narrow, cobbled streets are crying out to be shopped on and the range of restaurants along the harbourside will provide the perfect way to refuel yourself or just sit and ponder your picturesque surroundings.

We also have many more European destinations for you to consider. Why not check out our Bucharest city breaks, for example.

Despite the overwhelming passage of time, the eastern ramparts of the old city seem to have beautifully preserved the Hellenistic and Roman force which has been carved in the ruins; endlessly moulding themselves into the beautiful historical and archaeological edifices that can still be seen today.

The most noteworthy historical site is the ever fresh-looking colossal triple-arched sandstone entryway, Hadrian's Gate, built by the Turkish people as a tribute to Emperor Hadrian back in A.D. 130.

The Antalya Aquapark is the best opportunity for you to get away from the bustle of the city. A whirlpool of thrills, the Aquatic Park meets all expectations and is suitable for all ages. A choice of 23 spiralling waterslides, quite a few artificial wild rivers that wind their way through the dramatic cliffs and extremely large water pools covering as much as 65,000m will get your heart pumping and your adrenaline flowing.

Founded around three thousand years ago, the chief trade city of the ancient Perge was built inland, 12 km from the Mediterranean, to prevent the pirate raids that constantly plundered the coastlines. About 18 km northeast of Antalya is the ancient and imposing vestiges of Perge; the ancient city boasts great days of richness throughout the Hellenistic, Roman and Byzantine eras.

Termessos was a Pisidian city built at an altitude of more than 1000 metres on the south-west side of Solymos in the Taurus Mountains. It lies 30 kilometres to the north-west of Antalya and is one of the best preserved of the ancient cities of Turkey.

Termessos constitutes an unusual synthesis of a large number of rare plants and animal species, which are under protection in the Termessos National Park. You can find a multitude of wild plants and, bounded by dense pine forests, the site, with its peaceful and untouched appearance, has a more distinct and impressive atmosphere than other ancient cities. Because of its natural and historical riches, the city has been included in a National Park bearing its name.

The overwhelmingly sparkling nightlife of this resort is one of the basic incentives for planning a trip to Antalya. The numerous activities one can indulge in at night are enabled by the plethora of bars, discos, clubs and pubs scattered throughout the resort, including on the beaches.

In Antalya and the surrounding areas, there are numerous places to satisfy the appetite ranging from pavement cafes serving traditional food, to restaurants offering international cuisine.

The national drink of Turkey is Raki, which is aniseed-flavoured.

There is a wealth of handicrafts available in Antalya for the discerning shopper. Traditional items such as the world famous handmade kilims (rugs) in bold colours, beautifully hand-painted ceramics, copper and brassware and ornate Meerschaum pipes make charming souvenirs and gifts.

Excellent quality gold, silver and leather goods are to be found at prices considerably less than outside Turkey.

Busy street markets (the most central one takes place on Wednesdays between Isiklar Street and the Talya Hotel) are packed full of stallholders jostling to sell you their best quality fruit and freshest vegetables. Aromatic spices and herbs such as cinnamon, saffron, paprika and mint entice the senses.

For more stylish boutiques, Antalya can offer excellent quality  clothes and accessories for a fraction of the price in Europe. Look no further than Ataturk Street, Konyaalti street, or the recently opened shopping mall called Migros 5M (situated on the Konyaalti Beach side of town).

This is the biggest club in Antalya with a capacity of around 2000 people. It is one of the hottest places to go in the summer. Club 29 has got a fascinating view, overlooking the Antalya Marina, and is a restaurant, bar and club combined.

A trendy location where the music gets better as the place gets more and more crowded. If you are looking for romance, you can enjoy the starry sky and chill to some great music.

Ally's is arguably one of the best dancing venues in Antalya. Be prepared for lengthy queues at the entrance as this is a popular place. The club is located in Kaleici, the historical centre of the city.

Discover more
Did you know?
Unique City
Special Events
Discover seasonal events
No items found.
No items found.
Stay at Local
Maritim Hotels
Our preferred European hotel partner
No items found.
Subscribe to our Tours & Land Holidays offers
JOIN NOW
Thank you! Your submission has been received!
Oops! Something went wrong while submitting the form.
Book Your
Excursions
By clicking an excursion below, you will be taken to the website of our booking partner Viator. Viator is a TripAdvisor company and reservations made using this link will be made directly with Viator. Full terms and conditions apply.
Inspiration & Advice
Our Blogs
Find plenty of tips, advice and news stories in our weekly blog posts.
Three Ways To Enjoy A Holiday To Turkey As The Country Bounces Back
Following the troubled times of two year's ago, Turkey is bouncing back and is set to see a record year for tourism. Here are just three different ways you can discover this fascinating country.
READ MORE