Situated on seven hills, the Bamberg Christmas market is located in the heart of the UNESCO World Heritage City of Bamberg in Northern Bavaria. The city enchants visitors with three different charming Christmas markets in winter time. During the Advent season, the 'Route of Nativity Scenes' links around 35 churches, museums and other places of interest by a remarkable series of traditional Christmas displays throughout the beautiful medieval city.

The Bamberg Christmas market is a market of many faces, with a range of stalls selling both modern and traditional gifts. The city has over 2,000 listed buildings, setting the scene for a culture long since forgotten. The festivities are popular with visitors of Nuremberg city breaks as the Christmas market is situated just north of the city.

The Imperial Cathedral, with its four towers in the city centre, is an impressive Romanesque building and well worth a visit. 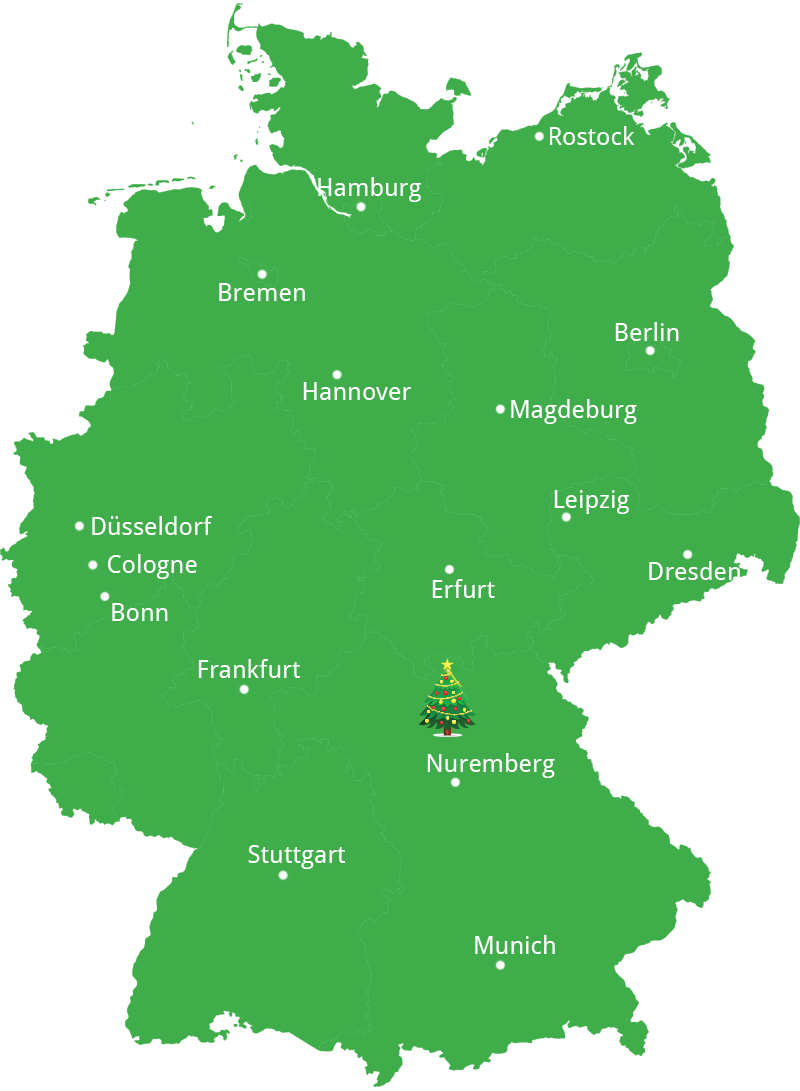 Subscribe to our Tours & Land Holidays offers
JOIN NOW
Thank you! Your submission has been received!
Oops! Something went wrong while submitting the form.
Visit Other
Nearby Markets
Make the most of your time with multi-centre visits.
Würzburg Christmas Market
Würzburg Christmas markets are tailor made for visitors who enjoy holidays and short breaks to the German Christmas markets.
Find out more
Nuremberg Christmas Market
Nuremberg Christmas markets are popular holidays for families and couples on traditional breaks to the German Christmas markets.
Find out more
Stay at Local
Maritim Hotels
Our preferred European hotel partner
No items found.
Read Some
Related Blogs
Find plenty of tips, advice and news stories in our weekly blog posts.
The Most Unique Christmas Markets around the World
There are too many Christmas Markets to count in Europe alone - it’s not easy to choose. If you’re looking for a stand-out Market however, here are some of the most unique Christmas Markets across the world.
READ MORE
The Best Of The Wursts
It may be slightly clichéd, but there’s no getting away from the fact that Germans love their wursts. But, with a great deal of choice on offer, how are you supposed to know the subtle differences? Well, here’s our guide to the best of the wursts.
READ MORE
How To Christmas Market Like A Pro
If you’re thinking about spending some time at one (or some) of Europe’s magical Christmas markets this December, now is the time to start planning. Here are some great tips to enjoy your chosen European Christmas market like a pro.
READ MORE
6 Things To Eat At the Bremen Christmas Markets
Over three days in Bremen, we had lunch and dinner from the market stalls, trying to sample as much of the local delights on offer as possible. Here are just a few that you should definitely try on your own trip to the Bremen Christmas mark&hellip;
READ MORE