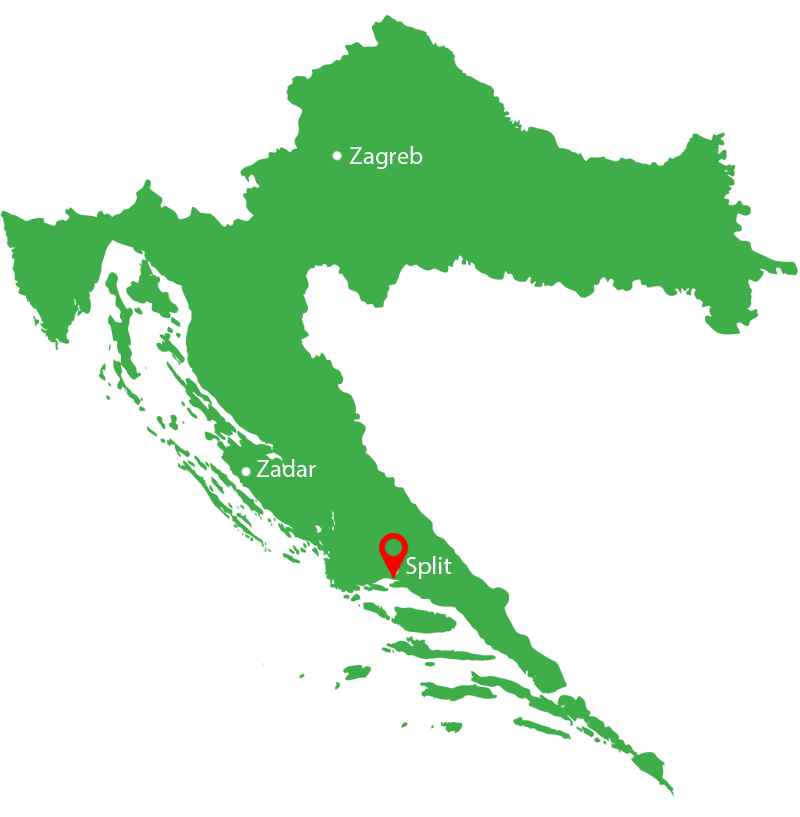 Split is the second largest city in Croatia and the largest city on the Adriatic coast, with just over 200,000 inhabitants. Coupled with its strong history - it emerged from a palace built by Roman emperor Diocletian, and was also an important city within Yugoslavia - this lively city is definitely worth a visit.

Many of Split's historical and cultural buildings can be found within the walls of Diocletian's Palace. In addition, numerous museums, the National Theatre, old churches and other archaeological sites in the Split region make it an important cultural attraction.

Diocletian's Palace is perhaps one of the most imposing Roman ruins in existence. Although the original structure was modified in the Middle Ages, the alterations have only served to increase the allure of this fascinating site. Far from being a museum, the 220 buildings within the palace boundaries are home to about 3000 people.

The Golden Gate was once the starting point for the road to Solin. From the fragments that remain, it's possible to visualise the statues, columns and arches that once decorated the gate.

North of the town centre, the Archaeological Museum is well worth a visit. Exhibits are devoted to burial sculpture and excavations at Salona, with an emphasis on the Roman and early Christian period.

In the summer, the after-dark entertainment zone of Bačvice plays host to an open-air cinema that runs nightly.

This cathedral was originally built as Diocletian's mausoleum. The original octagonal form of the mausoleum, encircled by 24 columns, has been almost completely preserved. The domed interior has two rows of Corinthian columns and a frieze showing Emperor Diocletian and his wife, Prisca.

Bekan serves an array of Dalmatian style fish. It's not cheap (unless you order the spaghetti with seafood for around HRK52), but you can sample a savoury shrimp buzara (a sauce of tomatoes, white wine, onions and breadcrumbs) on an airy terrace overlooking the sea.

Marine creatures of all persuasions feature on a delightful menu in this sweetly decorated spot next to the fish market.

To bag a bargain or simply appreciate the colour of local life in Split, head to Pazar, the charming open-air market, or Peskarija, the covered fish market, both are just on the fringes of Diocletian's Palace.

Diocletian's Palace and the surrounding area is Split's shopping heartland. Podrum (the underground chambers between the Riva and Peristil), which is lined with stalls selling paintings and craftwork, is a good bet for souvenirs. Enoteka Terra, Prilaz brace Kaliterna 6, is ideal for quality Croatian wines and spirits. Aromatica, Dobrić 12, stocks herb-scented soaps, body creams and massage oils.

Everything you could wish for to while away your summer nights can be found in Split. Split locals party with Mediterranean abandon and then relax during the day on the beach. The two main hotspots are Diocletian's Palace and the Bacvice complex a couple of kilometres east of town.

Within the Diocletian palace walls are new bars, cafes and hangouts which are constantly slipping in and out of fashion. On the other hand, the Bacvice complex houses a multitude of restaurants, clubs, and bars that overlook the beach.

Cafe Song & Cafe Shook: Popular with the young people, these cafe-pubs sit next door to each other on Mihovilova Sirina.

Po Bota: On Subiceva, this is a mellow hangout for sipping coffee or sampling a beer or two.

Gaetto Club: On Dosud, this club is arty and comfortable at any time of the day.

Kino Bacvice: The after-dark entertainment zone of Bačvice is a perfect venue for the open-air cinema that runs nightly in summer.

Tribu: When Tara Reid taped an episode of her show at this ultrahip Split club it became an obligatory stop on the international nightclub circuit. Dance until you drop.

Discover more
Did you know?
Unique City
Special Events
Discover seasonal events
No items found.
No items found.
Stay at Local
Maritim Hotels
Our preferred European hotel partner
No items found.
Subscribe to our Tours & Land Holidays offers
JOIN NOW
Thank you! Your submission has been received!
Oops! Something went wrong while submitting the form.
Book Your
Excursions
By clicking an excursion below, you will be taken to the website of our booking partner Viator. Viator is a TripAdvisor company and reservations made using this link will be made directly with Viator. Full terms and conditions apply.
Inspiration & Advice
Our Blogs
Find plenty of tips, advice and news stories in our weekly blog posts.
5 Dishes To Try When Travelling To…Croatia
Featuring plenty of seafood and influenced by Italian cuisine, here are a few things to try when you are in Croatia.
READ MORE
Your Definitive Guide To A Dubrovnik City Break
Here is everything you need to know when taking a trip to Dubrovnik.
READ MORE
4 Key Areas Of Croatia Worth Exploring
With great weather, great food and some intriguing history, there are many reasons why Croatia should be on your travel list.
READ MORE