0800 035 0711
0800 988 3369
Home
/
Destinations
/
Italy
/
Naples
Travel to...
Naples
The birthplace of pizza is one of the oldest settlements in the world to be continually inhabited. Naples lures travellers with the promise of fascinating history, artistic masterpieces and fantastic cuisine. 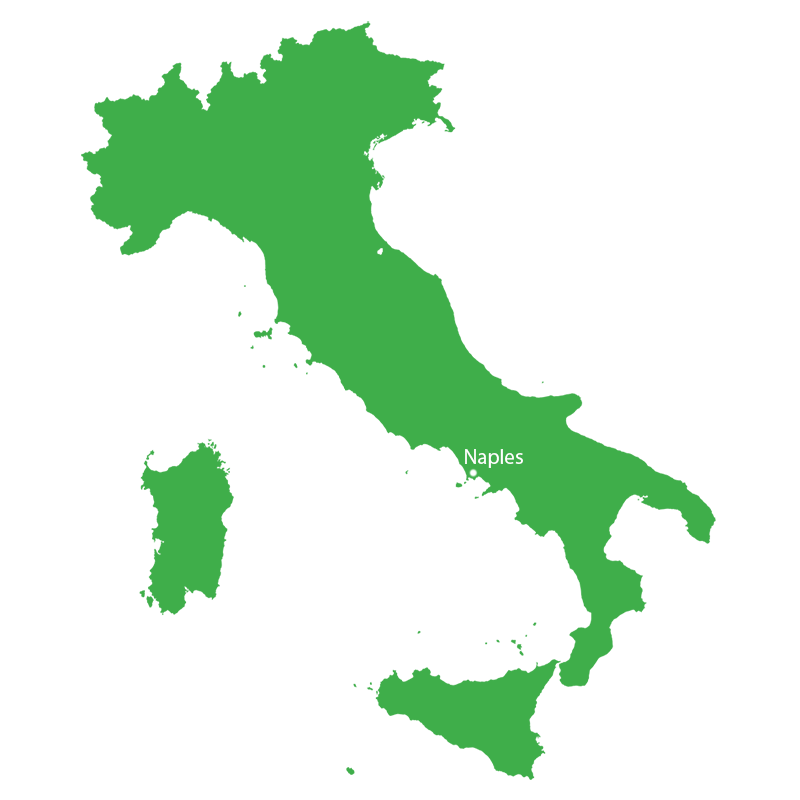 The birthplace of pizza is one of the oldest settlements in the world to be continually inhabited. Set in a beautiful bay on the west coast of Italy, Naples lures travellers with the promise of fascinating history, artistic masterpieces and fantastic cuisine – and it delivers on all three.

On the surface, the maze of alleys and cobbled streets may seem a bit grey and ordinary, but you will turn every corner with the anticipation that an archaeological treasure or resplendent palace is waiting for you. Naples has a reputation for being somewhat harsh, but a city boasting gilded churches like Gesù Nuovo should never be considered anything less than beautiful.

You’ll only get a chance to enjoy sights like this, however, if you can pull yourself away from the cafés and restaurants. And when you consider traditional Neapolitan pizza, authentic pasta, aromatic coffee and seafood fresh from the Tyrrhenian Sea are all on offer, that’s easier said than done.

The appeal of Naples is enhanced by its proximity to some amazing attractions and destinations in the area. Just an hour’s train journey from Rome, it’s also within easy reach of Pompeii, Herculaneum, Vesuvius and the alluring Amalfi Coast.

The city centre is a UNESCO World Heritage Site and a great place in which to lose yourself. It’s densely populated and the traffic doesn’t always stop for tourists, but this is the real Naples. The labyrinth of streets is filled with shop fronts that have been here for hundreds of years.

Being a heavily religious city, Naples is full of Christian points of interest. The museum inside the Sansevero Chapel is one such example and is home to the famous Veiled Christ statue. The intricacy of the marble makes it look as though the sheet is moving before your eyes.

MADRE, the Museum of Contemporary Art

Proof that Naples isn’t all about treasures from the past, this modern art museum features works from Italy and further afield.

Naples may not be able to rival Rome in the archaeological stakes, but it definitely comes close. This sprawling museum features ancient frescoes and artefacts recovered from Pompeii and Herculaneum.

One of Naples’s most eye-catching landmarks, the Castel Nuovo stands close to the port. Inside, you can learn about its medieval history, admire the artistic ceiling in the Baron’s Hall or climb the tower for excellent views of the city and out to sea.

Many travellers have heard about Pompeii but fewer know that the people of nearby Herculaneum suffered the same horrific fate. These two preserved towns act as open-air museums with a very interesting window into a frozen period of time.

Take the local Circumvesuviana train to the active volcano that looms over the Naples area. It has been declared a national park and a number of trails will lead you up to the crater’s edge.

Hop on the same Circumvesuviana train and stay on until you reach Sorrento, the gateway to the glorious Amalfi Coast. From here, you can take local buses to picturesque towns such as Positano, Amalfi and Ravello. You’ll find craggy coastlines, beautiful beaches, gorgeous fishing villages and enchanting caves.

A twisted horn known as a cornicello is worn by many Naples residents to bring them good luck and to ward off the ‘evil eye’. Because of the way it looks like a red chilli pepper, this symbol is often used as well, especially on buildings.

Unique City
Special Events
Discover seasonal events
No items found.
No items found.
Stay at Local
Maritim Hotels
Our preferred European hotel partner
No items found.
Subscribe to our Tours & Land Holidays offers
JOIN NOW
Thank you! Your submission has been received!
Oops! Something went wrong while submitting the form.
Book Your
Excursions
By clicking an excursion below, you will be taken to the website of our booking partner Viator. Viator is a TripAdvisor company and reservations made using this link will be made directly with Viator. Full terms and conditions apply.
Inspiration & Advice
Our Blogs
Find plenty of tips, advice and news stories in our weekly blog posts.
The Dos And Don’ts Of Visiting Pompeii
Any visit to Naples and the surrounding area would not be complete without spending some time in Pompeii. However, it’s not always straightforward to plan a visit like this, so we’ve put together some dos and don’ts that will help you get around.
READ MORE
5 Dishes To Try When Travelling To…Italy
We all know about pizza and spaghetti Bolognese, but what do the locals eat in Italy and what should you definitely try whilst you are there?
READ MORE