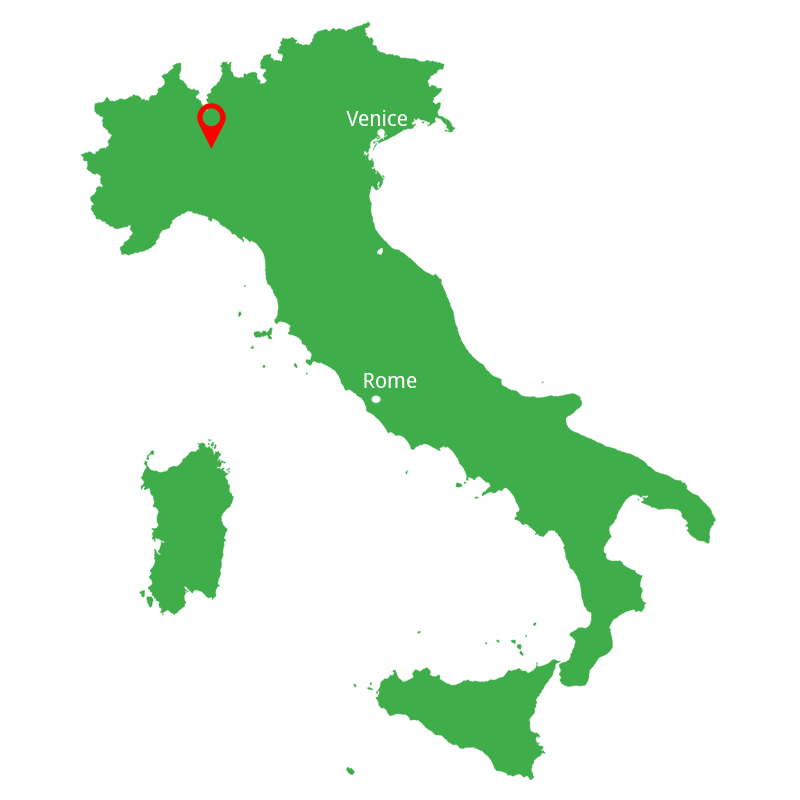 Milan is often considered a contrast to Rome in the way that the latter shows off the historical side of Italy, whilst the former has both feet firmly in the 21st century. Famous for being at the cutting edge of industries such as fashion and art, Milan really is a bustling cosmopolitan city which is as trendy as they come.

Along with the galleries and high-end clothing stores, there are excellent theatres which host the latest operatic offerings and super-modern restaurants and clubs which help to show that this city is as much alive at night as it is during the day.

That's not to say that Milan doesn't have its fair share of culture and history though, as there is plenty to satisfy the sightseer on their city break. The gothic cathedral, grand duomo and one of Da Vinci's most iconic works - The Last Supper - can all be found amongst the hustle and bustle of this sophisticated area.

It is advised that you break away from the beaten track once you have seen some of the more popular sights, as Milan has as much to show you in its quirky back streets and less-touristy quarters as it does in the heart of the city centre.

Il Duomo is one of Italy's most impressive cathedrals and the world's largest Gothic cathedral. It's renowned for its spires and statues, as well as the white marble it is built with. The interior is breathtaking and the views you are able to enjoy from the roof are simply marvellous. After visiting the cathedral, relax in Piazza del Duomooutside and watch the surrounding thriving life.

Head here to admire Leonardo da Vinci's most famous work,' The Last Supper'('Cenacolo Vinciano'), which was painted over a four-year period.

You will discover the statue of Leonardo Da Vinci and the La Scala theatre on the small but wonderful Piazza Della Scala. Fine palaces, like the beautiful city hall, surround this square.

The Carthusian Monastery of Pavia is a living museum, an architectural treasure box containing prized artworks and run by the monks who produce excellent Chartreuse liqueurs. Located 140km (87 miles) south of Milan, in an idyllic setting, the monastery is reachable by bus or train. The Certosa di Pavia is a 15-minute walk (skirting the Certosa walls) from the station. Duke Gian Galeazzo Visconti ordered the monastery's construction in 1396, the same year as Milan's cathedral, as a monument to the Visconti dynasty. The Cistercian monks conduct tours, showing the cloisters, cells and beautiful frescoes by Pietro Perugino and Bergognone. The ornate marble facade by Amadeo is a masterpiece and is famous throughout Italy.

Only 43km (27 miles) from Milan, the walled hilltop town of Bergamo is an enchanting place with a wealth of medieval, Renaissance and baroque architecture. Highlights include the Piazza Vecchia in the heart of the upper town (Bergamo Alta), with the Palazzo della Ragione and the Torre della Civica. In the nearby Piazzetta del Duomo, the cathedral is overshadowed by the Romanesque church of Santa Maria Maggiore, which includes a 19th-century memorial to the native composer, Gaetano Donizetti.

Fantastic views are on offer from the Castello on the summit of San Vigilio. The Accademia Carrara, at the bottom of the plateau on the eastern side, is one of Italy's finest art galleries, featuring important art from the Middle Ages to the 20th century. Trains run from Milan's Porto Garibaldi or Lambrate stations.

The world-famous San Siro Stadium (also known as the Stadio Giuseppe Meazza) is jointly home to Milan's two main football teams and two of the best teams in Italy's Serie A football league, AC Milan and Internazionale. Both clubs have proud footballing traditions and the San Siro Museum tells their histories with memorabilia including cups, medals and shirts as well as life-size replicas of some of the clubs' great players including Franco Baresi, Paolo Maldini, Marco Van Basten, Ruud Gullit and Nereo Rocco. Guided tours of this incredible 86,000 capacity ground are available. Both sets of fans are fiercely proud of their clubs and derby games between the two teams often have an electric atmosphere. The San Siro also hosts rock concerts during the closed season.

Milan has become a driving force behind Italian drama since the foundation of the Piccolo Teatro di Milano by Giorgio Strehler and Paolo Grassi in 1947. The company puts on a wide repertory of international, classical and experimental drama in three different theatres. Audiences can choose between programmes for the Teatro Grassi, Via Rovello, the experimental theatre Teatro Studio, Via Rivoli, and the Teatro Strehler, Largo Greppi.

Opera lovers know the Teatro alla Scala, La Scala for short, the world over. The main ticket office remains under the Piazza Duomo and you get in by scaling the stairs of the Duomo Metro. The home of classical ballet in Milan and its renowned ballet school, the Scuola di Ballo del Teatro alla Scalais, are also at La Scala.

Another illustrious venue for classical concerts in Milan is the Conservatorio di Musica Giuseppe Verdi, where the Cantelli Orchestra performs. The conservatory was founded in 1808 in a former Lateran convent. Many key Italian musicians studied here - although, oddly enough, the young Giuseppe Verdi was rejected. There are two concert halls: the smaller Sala Puccini for chamber music and the bigger Sala Verdi for symphonic and choral music.

This lovely restaurant is set in a picturesque narrow lane in one of the most ancient regions of the city, near the Duomo. The place offers a menu made up of delicious traditional Milanese dishes, such as risotto with saffron and beef marrow, minestrone that is served hot in the winter and at room temperature in the summer, veal chops breaded and fried in butter or Polenta with rich Gorgonzola cheese. Enjoy your meal in the company of local Milanese families as well as other tourists and let yourself be served by excellent staff.

This restaurant is known as one of the most popular around, with its location close to the Navigli. Dine outside and enjoy views over the canal whilst you tuck into dishes such as ricotta-stuffed ravioli with a pesto of rucola and veggies, tocchetti di coniglio (oven-roasted rabbit with potatoes), porchetta (pork stuffed with spices), or vegetable couscous alla Trapanese.

A marvellous seafood restaurant with dishes consisting of whatever Italy's best catch was on the day you visit, such as fresh cod or tuna. Go for the mixed plate and try a little of everything; sea bass, salmon, red snapper, sturgeon, shrimp, prawns etc.

One of four Milan branches of this successful pizza chain, the emphasis at Anema e Cozze is on tasty Neapolitan pizzas topped with fresh seafood. Fishy toppings include the likes of clams, sardines, mackerel and mussels. Fish-infused pasta dishes and seafood antipasti are also on the menu. It's a simple place where tasty food and reasonable prices ensure a steady flow of customers.

If you're looking for tasty and affordable food in Milan, then you won't go far wrong at this self-service restaurant located close to Piazza Cavour. Hearty pasta, fresh pizza, salads and gargantuan desserts are just some of the things on offer at Brek. Healthy fruit juices, hot drinks and alcohol are also on sale in this Italian fast-food outlet.

Milan provides everything from designer outlets to small boutiques and second-hand stores. With the reputation of being a worldwide trendsetter, it is to be expected that this city is a shopper's paradise.

The Quadrilatero della Moda is the main shopping area, situated between Duomo Square, Cavour Square and San Babila Square. It is the place to go if you are looking for the most fashionable and chic trends, with pricey boutiques and designer labels. If you are seeking an area where you are able to find real bargains, head to Vercelli Avenue or Buenos Aires Avenue. The latter is said to be the longest shopping street in Europe.

Browse through unique art stores and galleries in the Brera area to purchase individual handicrafts or exotic furniture. This district manages to mix exclusive, old and modern shops.

For those who prefer the bustle of street markets, Viale Papiniano (metro San Agostino) is open all day Saturday, while Via Zivetti (metro Centrale FS) is open on Wednesday mornings. The flea market, Fiera di Senigallia, takes place in the Porta Ticinese area and offers new and second-hand clothes, old furniture, perfumed candles, books, comics, records and much more. There is another market, the Mercatone del Naviglio Grande, which displays wonderful antiques.

Il Gattopardo Café, in a deconsecrated church in the upwardly mobile north-west of Milan, is a beautiful building in which to enjoy a night out.

Plastic is one of the most popular nightclubs in Milan and plays Italian house and techno music. Free admission on Sunday nights.

The gargoyles on the facade of the Milan cathedral are available to be adopted. However, you will have to find a cool €100,000 to do so.

Unique City
Special Events
Discover seasonal events
No items found.
No items found.
Stay at Local
Maritim Hotels
Our preferred European hotel partner
No items found.
Subscribe to our Tours & Land Holidays offers
JOIN NOW
Thank you! Your submission has been received!
Oops! Something went wrong while submitting the form.
Book Your
Excursions
By clicking an excursion below, you will be taken to the website of our booking partner Viator. Viator is a TripAdvisor company and reservations made using this link will be made directly with Viator. Full terms and conditions apply.
Inspiration & Advice
Our Blogs
Find plenty of tips, advice and news stories in our weekly blog posts.
Italian Lakeside Towns That Shouldn’t Be Missed
The Italian lakes could be the perfect destination for your 2017 break. Here are a few towns you should definitely check out if you decide to make the trip.
READ MORE
5 Dishes To Try When Travelling To…Italy
We all know about pizza and spaghetti Bolognese, but what do the locals eat in Italy and what should you definitely try whilst you are there?
READ MORE