0800 035 0711
0800 988 3369
Home
/
Destinations
/
Austria
/
Innsbruck
Travel to...
Innsbruck
Innsbruck city breaks are situated within easy reach to explore Europe's oldest city and the capital of the state of Tyrol. Book your trip today! 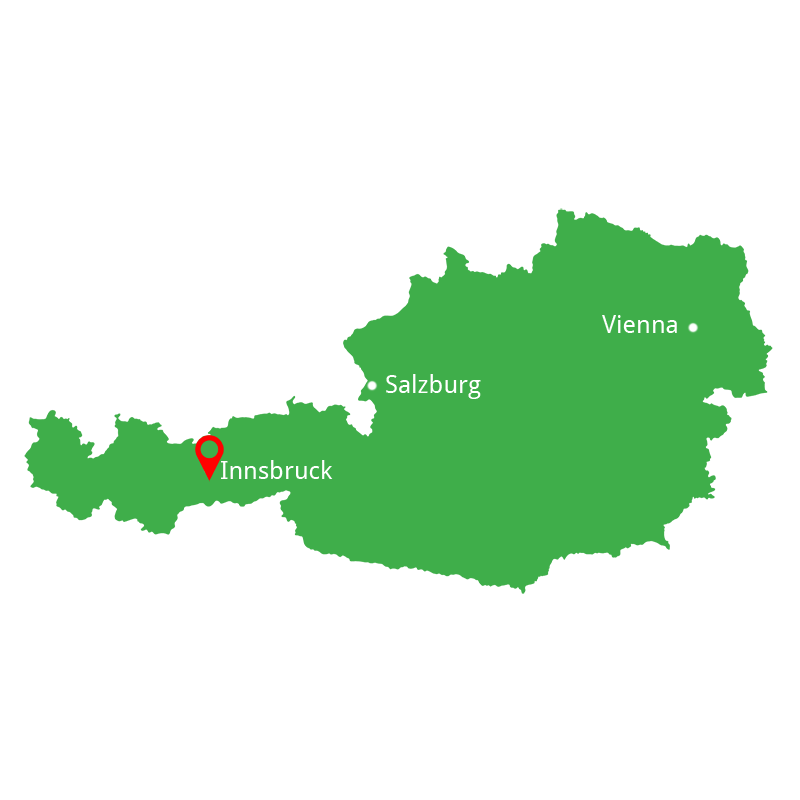 Innsbruck, the state capital of Tyrol, is known as the 'Heart of the Alps'. It is a two-time host of the Olympic Winter Games, in 1964 and 1976 and has an intriguing history of over 800 years.

The city offers art and cultural treasures, as well as beautiful historic architecture like the Golden Roof, the Imperial Court Palace and the Ambras Castle. Innsbruck harmoniously combines tradition and modernity. Amid the charming Old Town, you will find the greatest tourist attractions and lovers of modern art will find plenty of galleries and special exhibitions to satisfy their cultural thirst.

The Hofburg is the former residence of Tyrol's Emperors and is classed as one of Austria's most important cultural buildings. For a 360-degree view of the city rooftops and surrounding mountains, walk the 148 steps to the top of the City Tower.

The Stadtturm (City Tower), situated in the Old Town, rises high above the town and offers spectacular views of the city and mountains.‍

Ferdinandeum is one of Innsbruck's most popular and noted museums and houses an extensive art collection from the Middle Ages to modern day. The Zeughaus used to hold the former armoury within its walls and now offers a journey through Tyrol's history.

On the outskirts of Innsbruck, in Wattens, is the Swarovski Crystal Museum (Swarovski Kristallwelten). The displays include designs by Salvador Dali and Andy Warhol and are well worth a visit.

The Museum of Tyrolean Folk Art showcases cultural treasures from the region's past.

The Goldenes Dachl gleams above the city of Innsbruck and is prominent in its skyline. It is a former royal residence and its name, meaning Golden Roof, derives from the canopy of gilded copper tiles which gleam like gold in the sun.

The Imperial Palace (Kaiserliche Hofburg) stands at the centre of the town and is a testament to Innsbruck's former glory. The interior rooms with their decadent and opulent décor make the Imperial Palace a must-see for any tourist.

The Court Church houses the cenotaph of Emperor Maximilian I. Twenty-eight larger-than-life bronze statues of the Emperor's relatives and ancestors flank the monumental tomb.

The Alpine Zoo is home to over 2000 Alpine animals of 150 species from the entire region of the Alps.

Innsbruck's Casino is the largest in Austria. It is attached to the Hilton Innsbruck and is open for elegant gaming. The crowd that frequents the casino is smart and jackets are required to enter.

This landmark was built along Maria Theresien Street to mark Tyrol's liberation from Bavaria. It features a statue of St Anne on the top and many other saints around the bottom.

Also known as Innsbruck Cathedral, this important building was a site of Christian Medieval pilgrimage. Today it holds the tomb of Archduke Maximilian III, the Innsbruck peace bells and a popular painting of Madonna and the Child by Lukas Cranach the Elder.

This former residence of Archduke Ferdinand II houses his collection of armour and antiques, as well as the Hapsburg Portrait Gallery in the upper castle.

Known as the most beautiful Rococo church in the whole of Austria, Wilten Basilica sits on the site where Romans were thought to have worshipped as early as the 5th century. The main highlight is the 'Our Lady under the Four Columns' sculpture.

To enjoy the beautiful surroundings of Karwendel Nature Park, you can first take the Hungerburg funicular to Hermann Buhl Platz. You can then walk across to the Nordkettenbahnen cable car to make your way to the top of the Seegrube.

This piece of modern architecture was created by Zaha Hadid and plays host to annual winter sporting events. You can climb to the top for fantastic views or watch the daredevil jumpers.

This Gothic mansion is named after Sebastian Helbling who used to run a small cafe from inside. It is a great example of the grandeur that used to be found all over the Old Town.

This eye-catching monument was created by Empress Maria Theresa. It both depicts and was built in honour of her son Emperor Leopold II's marriage to Maria Ludovica of Spain.

If you're a fan of winter sports then this is where you need to head. The area features no less than nine different ski resorts, which can all be accessed together when you buy an OlympiaWorld lift pass.

Numerous Würstelstandl (sausage stands) are scattered throughout the city. They offer quick and simple snacks and cheap drinks, making them very popular with both locals and tourists. They can be found opposite the Golden Roof, on Maria-Theresien-Straße in front of the Kaufhaus Tyrol, at the triumphal arch, and a late-night address well known among locals, 'Franz' on the Südring.

Stiftskeller and the Ottoburg offer traditional Austrian and Tyrolean food at reasonable prices.

Innsbruck is also host to numerous international culinary restaurants. For example, there are many Italian restaurants ranging from self-service restaurants, such as Salute, the Prendi branches or Innrain to the more gourmet Da Peppino, situated close to the Old Town.

Thai cuisine is also popular in Innsbruck. Thai Li is a small, award-winning establishment that serves inexpensive lunches and is situated in the outer walls of the Old Town.

Papa Joe's and Chili's serve American-Caribbean and an American-Mexican cuisine.

The café culture in Innsbruck is also thriving. Cafe Katzung has a relaxed atmosphere where coffee can be drunk at leisure, passing away long afternoons. Cafe Central is much larger and more rustic and serves warm meals.

The main shopping centres in Innsbruck include the centrally located Rathaus Gallerien, along with the nearby malls of DEZ-Einkaufszentrum and Einkaufcenter Sillpark. There is also an open-air shopping mall that can be found in the centre of Innsbruck.

To have a unique shopping experience visit the Old Town, where shopping and sightseeing can be combined. Go along the pedestrianised Maria Theresien Strasse and Herzog Friedrich Strasse, where numerous souvenir shops can be found. In one of the oldest buildings of the town, Swarovski is housed, where beautifully made crystalware from the Tyrol region can be purchased.

Close to Innsbruck and within the neighbouring village of Neu-Rum are a number of converted shopping warehouses, which are well worth a visit.

Innsbruck's most popular bars and night-time hot spots are the Europa-Bar in the Europa Hotel and the 5th-floor bar at the modern Hotel The Penz in the city. Perhaps even more popular are Gössers and Havanna which are interestingly located in the town hall gallery. For panoramic views, visit The Roof Top Wine Bar 360°.

Theresienbräu and the Elferhaus are for the younger crowd. In Theresienbräu, there is an actual brewery where you can watch the beer being made. Piano Cafe/Bar is for a more mature crowd. It is relaxed and comfortable with an antique interior and paintings that cover the walls.

Café Club Dine & Dance is a large Victorian bar with high ceilings and a smoking club atmosphere. The club has a large and spacious interior with seating in a loft over the main floor and a quieter, more intimate bar to the side.

Treibhaus is tucked in a back alley just outside the Altstadt. It is Innsbruck's real bohemian hangout for all ages and is visited by tourists and locals alike. A spacious upstairs has a kitchen serving pizza and the basement is known for playing hot local jazz and ethnic music.

Bögen-Lokale is where you can dance and party until morning.

Bacchus is a former 80s disco and now one of the gay/lesbian meeting places in Innsbruck. It's open until dawn.

Prometheus Keller is divided into a café and a cellar. The cellar hosts the oldest dance club in Innsbruck. This club has a unique style, you won't find cheaper drinks in Innsbruck and the DJs provide a modern and interesting sound.

Around the city, you will see plenty of water fountains. These carry water direct from the mountains and are perfect for refilling your bottle on a hot day.

Swimming In The Lakes

When temperatures start to rise, the locals like nothing more than relaxing in one of the many lakes. Baggersee and Lanser See are closest to the city centre.

Muttereralm Park hosts morning yoga sessions with the Alps as a stunning background. For 27 Euros you get a yoga class, breakfast and access to the cable car.

These small pools of cold water have been soothing aching limbs since 1850. Sebastian Kneipp first came up with the idea and locals have been reaping the benefits ever since.

Discover more
Did you know?
Unique City
Special Events
Discover seasonal events
Innsbruck Christmas Market
Innsbruck Christmas markets provide family holidays and romantic breaks to traditional European Christmas markets.
Find out more
No items found.
Stay at Local
Maritim Hotels
Our preferred European hotel partner
No items found.
Subscribe to our Tours & Land Holidays offers
JOIN NOW
Thank you! Your submission has been received!
Oops! Something went wrong while submitting the form.
Book Your
Excursions
By clicking an excursion below, you will be taken to the website of our booking partner Viator. Viator is a TripAdvisor company and reservations made using this link will be made directly with Viator. Full terms and conditions apply.
Inspiration & Advice
Our Blogs
Find plenty of tips, advice and news stories in our weekly blog posts.
4 Underrated Christmas Markets For 2016
There are hundreds of Christmas markets in Europe, more than the ones in the capitals. So here are a few different options that you may not have considered.
READ MORE
The Definitive Guide To A Vienna City Break
From what to do to how to get there, here is everything you need to know when embarking on a culture-rich Vienna city break.
READ MORE