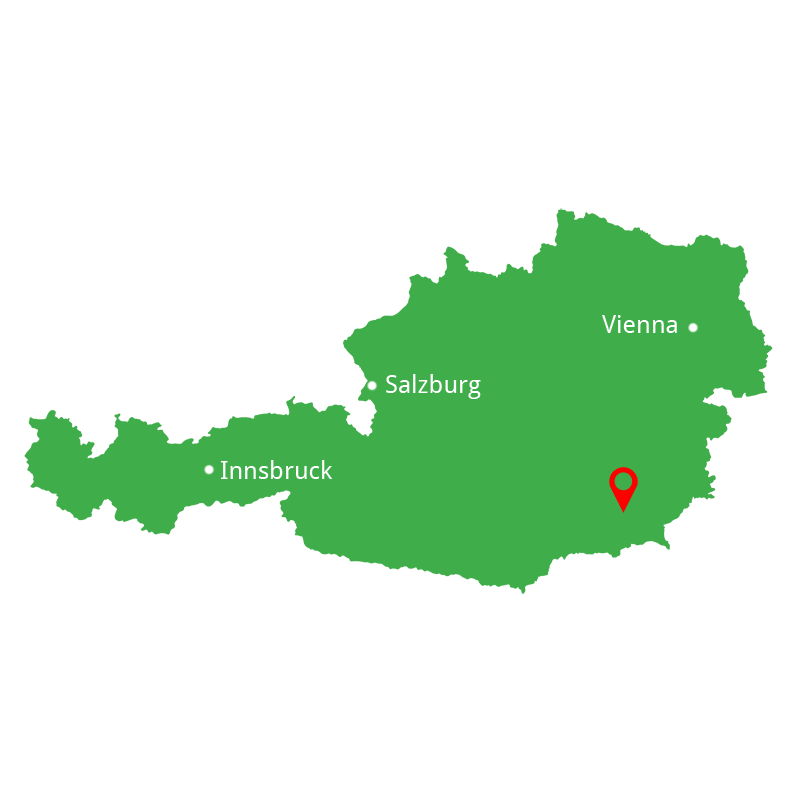 Graz city breaks provide a unique look into the culture and tradition of the second largest city in Austria, a city ladened with thousands of students attending the six universities that give the city a modern and young vibe. Known as the "Capital of culinary delights", the city offers local delicacies and dishes in its many restaurants and delis along with those from the rest of the world.

In August, food enthusiasts will descend on Graz for the annual long table event in the historic Old Town where you can enjoy a gourmet dinner prepared by local chefs whilst relaxing to a selection of local music. The Old Town of Graz provides a beautiful setting and so to preserve its beauty has been added to the UNESCO list of World Cultural Heritage Sites. the Graz Christmas Market is held here each year with their wonderfully decorated stalls, creating a cheerful atmosphere which will be unforgettable to its visitors.

Graz has many showcases of modern art like the one along the banks of the Mur River. The Kunsthaus looks like a blue blob and is home to an ever-changing collection of cutting-edge art exhibits.

Island in the Mur

In the middle of the Mur River itself stands the "Island in the Mur", a modern shell-shaped glass and metal structure which was built in tribute to Graz's designation as Europe's Cultural Capital in 2003. The Island houses an amphitheatre, playground and café.

Natural history is displayed at the old Joanneum building. The Old Gallery presents a collection of medieval paintings through the 18th century. The New Gallery, in the Heberstein House, displays art from the 19th century to the present.

The armoury museum is a tribute to the Turkish Wars, as they had a great impact of Graz itself. The museum exhibits three centuries of weaponry with 30,000 pieces of armour.

The Old Town of Graz is a UNESCO World Heritage Site. The most important attractions in the Old Town are the Hauptplatz (Main Square), encompassed by ancient houses, and the Landhaus, a 1565 Renaissance building and the seat of the provincial government. Visitors can pass away hours wandering leisurely around the old streets and seeing the beautiful old buildings.

The Schloss Eggenberg is one of the most impressive buildings in Graz. It is a 17th-century square-shaped palace, with four imposing towers. It houses the Landesmuseum and Joanneum's centre of early history, which has an excellent collection of Styrian antiques and coins. There are also Baroque state apartments within the building, of which guided tours are available.‍

Schlossberg is a fortified hill elevated 473 metres overlooking Graz, on top of which are the old citadel and bell tower. Guided tours can be taken and, during the summer, concerts are held on the castle's ramparts. There is also a popular restaurant which can be reached by a cable railway, or alternatively there is a winding staircase.‍

Opernhaus (Opera House) is intrinsic to Graz's nightlife, as the home of Graz's opera company. The faux-baroque theatre was designed at the end of the 19th century and shows are frequently held. It is a firm favourite amongst locals.

The Graz baroque, Italian Renaissance influenced castle and the Schloss Eggenberg, whose elevated position looks out over the Old Town, are particularly popular with visitors. Our Graz and nearby Klagenfurt City Breaks are exceptional destinations to gain a unique experience of traditional Germany. Influenced by the vast student population, Graz is also host to many festivals. For example, the Styriate, Styrian Autumn (Steirischer Herbst), Jazz Summer, La Strada, or Classics in the City, all contribute to Graz's vibrant atmosphere.

Completed in 1899 by the architects Fellner and Helmer, the Graz Opera House was awarded "Opera House of the Year" in 2001 in recognition of the venue's dedication to music and the arts. Today the Opera House still plays host to some of Austria's best plays and musical events, with its lavish interior a tribute to the venue's tradition and a popular venue for visitors wanting to experience this unique musical city.

The thriving coffee culture in Graz is evident from the numerous coffee houses all with a charming and relaxing atmosphere. Vienna coffee features prominently in the city and is served in places such as the Strehly and the Fotter, which also serve delicious baked sweets.

Countless sausage stands are dispersed across Graz and serve the speciality of the kotelett semmel (cutlet roll). The stands also sell doner kebabs, mozzarella sticks and plenty of grilled sausages, and are Graz's answer to fast food.

Mehlplatz and the Färberplatz, located in the historic Old Town, are the places to find the best restaurants. The Hauptplatz and adjacent Calf's Quarter are also worth a look.

Schlossberg Restaurant, by the River Mur in the Lend district, offers a highly admired dining experience. Residing on the Schlossberg, this restaurant is reputed to be one of the very best that the city has to offer. It's chic and formal interior, as well as the cheap self-service area and al fresco dining in the beer garden, make it a very popular option.

Kernöl (pumpkin seed oil) is a speciality of the region of Styria and has a unique taste. It can be purchased at the farmer's markets such as the regular market on the Kaiser-Josef-Platz. Good quality oil can also be bought from normal supermarkets.

Herrengasse is the main shopping street in Graz. It connects the main square (Hauptplatz) with Jakominiplatz.

Numerous lanes in the old town like Schmiedgasse or Sporgasse house numerous confectionary shops that sell stylishly packaged chocolates with boxes decorated with images of the Emperor Franz Joseph.

Kastner Öhler is Graz's big department store which is situated right in the centre, next to the main square. Other department stores include the City Park shopping mall which is located on south-western edge of central Graz.

Mariahilferstraße is behind the Kunsthaus and has many little designer shops, retro furniture shops and shops which sell custom made t-shirts.

Farbergasse-Mehlplatz, known by locals as the Bermuda Dreieck (Bermuda Triangle) is where most of the city's bars, clubs and restaurants are situated.

The city is known to offer excellent jazz. Performances are often sporadic and not always rigidly scheduled. Das Neue Wist is a popular hot-spot for jazz lovers.
Casino Graz

Casino Graz is located at the corner of the Schmiedgasse, in the centre of the Old Town. The Casino's chief attraction is the availability of its slot machines (daily 11am-3am), its roulette wheels and blackjack tables. Entry is restricted to those over 18 years of age and, as it attracts a smart crowd, jackets and ties are usually required for men. Entrance is free. A restaurant and a piano bar are also within the Casino and cabaret shows are occasionally presented.

Discover more
Did you know?
Unique City
Special Events
Discover seasonal events
No items found.
No items found.
Stay at Local
Maritim Hotels
Our preferred European hotel partner
No items found.
Subscribe to our Tours & Land Holidays offers
JOIN NOW
Thank you! Your submission has been received!
Oops! Something went wrong while submitting the form.
Book Your
Excursions
By clicking an excursion below, you will be taken to the website of our booking partner Viator. Viator is a TripAdvisor company and reservations made using this link will be made directly with Viator. Full terms and conditions apply.
Inspiration & Advice
Our Blogs
Find plenty of tips, advice and news stories in our weekly blog posts.
Vienna: Europe’s Home Of Art And Culture
You only need to take a relaxing stroll along the Ringstrasse to realise that the Viennese know what they’re doing when it comes to art and architecture. The city is littered with resplendent palaces, 19th-century cafés, world-famous art galleries and elaborate venues in which to enjoy everything from opera to cinema.
READ MORE
The Definitive Guide To A Vienna City Break
From what to do to how to get there, here is everything you need to know when embarking on a culture-rich Vienna city break.
READ MORE