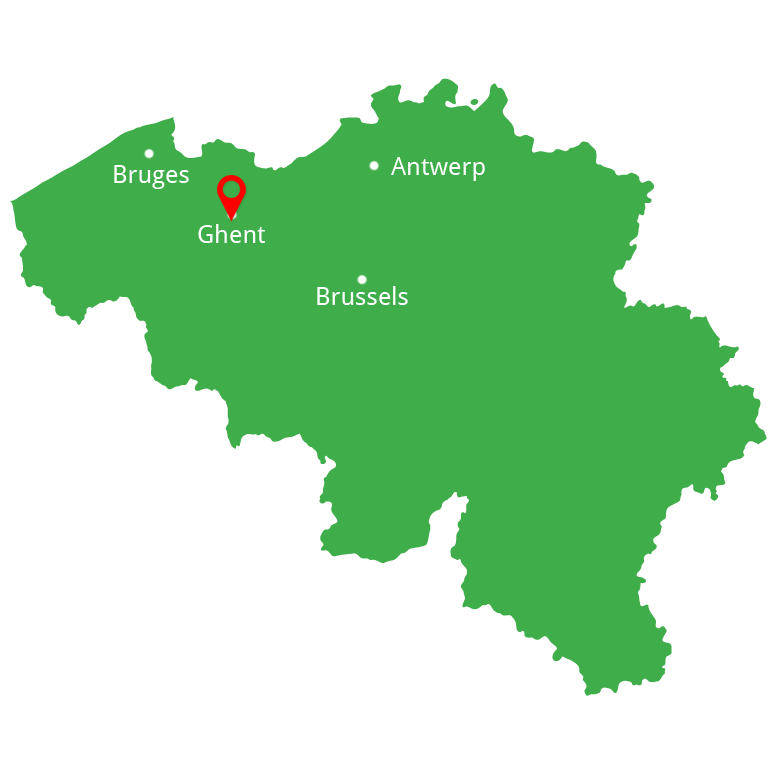 In a unique way, the beautiful city of Ghent has managed to preserve its medieval power while keeping up with the times. It was one of the biggest cities in Western Europe at the end of the Middle Ages, renowned for its textile industry. Today it is the third biggest city in Belgium and one of the most beautiful.

Modern Ghent certainly cannot be overlooked. The city has an important port, thanks to the Ghent-Terneuzen canal which allows sea-going vessels to bring their products to the city and its industrial hinterland. Tourists will admire the awesome architectural wealth, which offers a splendid combination of impressiveness and idyllic charm of the proud and (in former times) often rebellious city of Ghent. The major attractions are the Counts' Castle, the Belfry and Saint Bavon's Cathedral, not to forget the splendid Graslei.

Also renowned are the Ghent Festivities, the biggest street theatre festival in Europe. Each year around the end of July, street artists from all over the world come to Ghent to give street performances at every possible hour during the ten days of the festival. At the same time, other festivals take place like the techno festival, the jazz festival Bluenote and the Latino Music Festival 'Pole Pole', with a huge stage over the main river in Ghent. Apart from this, many rock bands perform and many side activities are organised.

The town hall is situated on the site where, until 1482, the town representatives and guild's men met in separate houses. Because these houses were judged too small and too unrepresentative for such important people, it was decided that a new and bigger town hall had to be built. The first stone of this new hall was laid in 1482 and the building was finished in 1484. Very soon, however, this new hall was considered too small and from 1518 until 1535 a new and much bigger town hall was constructed in late-gothic style.‍

Cloth is what made Ghent rich. Against the belfry stands the cloth hall of Ghent, built between 1425 and 1445. Everything in relation to the trade, the main industry in the city, happened here. This includes the signing of sales contracts and weighing of products.‍

The numerous waterways passing through the city centre all flow towards the former port at the Graslei. The elegant façades of the buildings on the Graslei and the Korenlei represent different architectural styles. However, together they make up a unique view Ghent can truly be proud of. Each façade reflects a period in history, reminding the visitor of the spirit of enterprise and the busy commercial activities of the old guilds.

A Greek restaurant with large plates of food for little money. Simple, quick and tasty, all you need if you aren't looking for a romantic dinner. We recommend the Retsina menu, a Greek "sampler" with a drink included.‍

Located somewhat outside downtown, close to the train station, De Rotonde offers a variety of dinners for good prices.

The main shopping street in Ghent is the extremely central and busy Veldstraat, which is lined with shops on both sides. Whilst the Veldstraat is completely pedestrianised, when shopping in this part of Ghent, it's important to bear in mind that trams still run along this stretch all through the day.

A pub that combines dancehall with alternative music, it frequently has free live performances and is the hippest bar in town according to reliable sources. It's near Sint-Jacobs and Vlasmarkt along with other slightly less hip places.‍

A fancy cocktail bar with a chilled-out atmosphere.‍

Exclusive Belgia beer house that features the finest ancient hops and grainjuice Belgium has to offer. Ask for Westvleteren Extra or see what the barman recommends. This all takes place in a medieval setting, so mind the gallow.

Discover more
Did you know?
Unique City
Special Events
Discover seasonal events
Ghent Christmas Market
Ghent Christmas markets offer festive holidays and couples breaks to a selection of traditional European Christmas markets.
Find out more
No items found.
Stay at Local
Maritim Hotels
Our preferred European hotel partner
No items found.
Subscribe to our Tours & Land Holidays offers
JOIN NOW
Thank you! Your submission has been received!
Oops! Something went wrong while submitting the form.
Book Your
Excursions
By clicking an excursion below, you will be taken to the website of our booking partner Viator. Viator is a TripAdvisor company and reservations made using this link will be made directly with Viator. Full terms and conditions apply.
Inspiration & Advice
Our Blogs
Find plenty of tips, advice and news stories in our weekly blog posts.
5 Dishes To Try When Visiting…Belgium
Chocolate is all well and good but it would be ill-advised to eat them for breakfast, lunch and dinner. So, here are a few dishes to look out for next time you find yourself in Brussels, Bruges or Ghent.
READ MORE
4 Underrated Christmas Markets For 2016
There are hundreds of Christmas markets in Europe, more than the ones in the capitals. So here are a few different options that you may not have considered.
READ MORE